On Monday, August 10th, yet another anti-masker temper tantrum went viral. In the viral video posted to Twitter, an unidentified anti-mask man can be seen yelling at customers and employees wearing face-masks in a Tucson, Arizona Sprouts Farmers Market.

In the man’s rambling speech, he shouts “these people [mask wearers] won’t learn. You’re a bunch of idiots wearing a mask when you know it’s [Covid-19] not real” and “look at you fools, you have a f***ing doily on your face”. Currently, according to data from the CDC, there are more than 20 million confirmed Covid-19 cases worldwide and 5 million confirmed cases in the United States. In just the United States, there have been more than 165 thousand reported deaths. With the denial of the pandemic being the leading cause of stupidity in the United States, turning a blind eye to recommendations from the global science community is not wise.

Anti-masker in Tucson, AZ throws a tantrum and has to be carried out by his own son pic.twitter.com/ggo4I968aL

While the anti-masker continued his meltdown, another customer wearing a mask is seen confronting the man, telling him to “shut up. Quit yelling at people”. In response to the customer’s confrontation, the anti-masker threatens the masked man with school-yard taunts telling him to “come outside. Show me how tough you are”, lunging at him so he could “beat that f***ing mask off your f***ing face”. As the situation continued to escalate, three younger men, who appear to be the anti-masker’s sons, can be seen physically restraining their father while he shouts “you’re a bunch of p*ssies wearing masks”. Eventually, one son is forced to carry their father out of the store, like how a parent would carry a toddler, to de-escalate tensions.

The supermarket chain, Sprouts Farmers Market, like many other stores around the nation, requires all customers older than 2 to wear face coverings while inside the store locations. While Sprouts hasn’t made an official statement about the viral confrontation yet, the company website states that “if you are unable or unwilling to wear a face-covering or face shield, we kindly ask you to consider our alternative shopping options including online ordering for curbside pickup or delivery”. 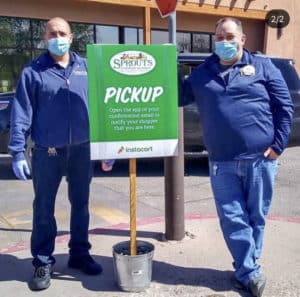 What are your thoughts on the situation? Let us know in the comments and follow What’s Trending for more of the latest news.