We hope that the teddy had medical insurance… 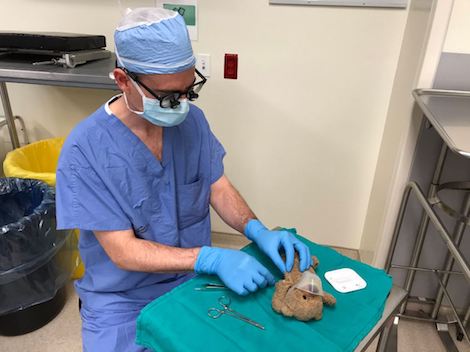 Even though the world right now is filled with pretty dark and scary news, there’s always that one little story that pops up every now and again, that restores your faith in humanity. For this week, the story of a surgeon, a little boy and his teddy bear has achieved exactly this.

Although surgeons are very busy professionals, who have one of the most stressful jobs, a Canadian surgeon, named Dr Daniel McNeely, put his time aside before operating on an eight-year-old boy, named Jackson McKie. Naturally, the little boy had worked up some nerves before going in for this operation but had his teddy bear by his side to comfort him.

Jackson is one of Dr Daniel McNeely’s regular patients, as he has a brain condition known as, ‘hydrocephalus’, which requires intense surgery. However, before the surgery, Jackson informed Dr McNeely that his teddy bear, Little Baby, also needed surgery. Now, we’re sure Dr McNeely isn’t a Build-a-Bear expert, but this wasn’t something he could really say no to, now was it?

Can you imagine the devastated look on the poor little boy’s face if he did? Anyway, McNeely wasn’t like The Grinch and did everything he could to save the teddy bear before operating on little Jackson. Firstly, he asked some nurses to set up a small operating table with the appropriate tools ready to operate on the teddy. Of course, Dr McNeely had to dress in the right attire, so was equipped with latex gloves, face mask and scrubs. It was a tough job, but we think Little Baby survived through the traumatic surgery…

Patient asks if I can also fix teddy bear just before being put off to sleep… how could I say no? pic.twitter.com/WOKFc5zr91

After seeing how brave Little Baby was, Jackson knew that he could be just as brave, too. All the nerves that Jackson had were lifted, which left for a very easy surgery. Dr McNeely expressed such kindness that many people don’t do today. Although he may be very busy and wanted to get the job done with no complications, he knew that he had to do right by his favourite patient.

Apparently, Jackson and Little Baby are doing very well after their surgery and are propped up on their hospital bed together ready for recovery. So cute!

Do you think Dr McNeely was very caring with this act of kindness? Do you think everyone could use a bit more sympathy for one another? Let us know in the comments, or on Twitter at @WhatsTrending.

VIDEO: Pete Davidson Does Amazing Take Down of Kanye Following His Rant

#VogueChallenge shows us what Diverse Fashion could be