Pranksters Hang Promotional Poster of Themselves in McDonald’s 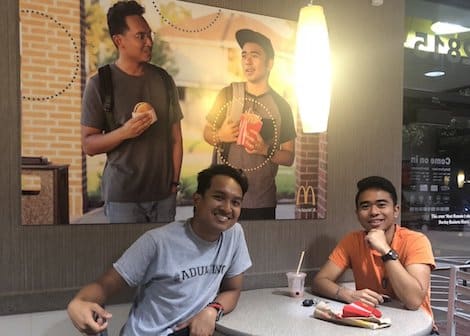 Two Filipino-American students played a very funny, yet clever, prank on McDonald’s, by hanging a huge fake promotional poster of themselves in their local fast food chain. Jehv Maravilla, who has his own YouTube channel, posted a video titled ‘We Became McDonalds Poster Models’, which has now been viewed over 600,000 times. Although the prank was fantastic, there was a much bigger message involved. Maravilla pointed out that McDonald’s has little to none Asian representation within their advertising and when he noticed a black space on the restaurant’s wall, he took the opportunity faster than you can say ‘I’m lovin’ it.”

i noticed there was a blank wall at mcdonald’s so i decided to make this fake poster of me and my friend. It’s now been 51 days since i hung it up. pic.twitter.com/5OTf5aR4vm

You would think that McDonald’s would notice when a picture of two random boys popped up right in front of them, but because the poster was so professional, it went completely unnoticed. Hell, it’s been there for nearly two months. We think that the prank was thought out very well, and while it is very funny to see how successful the two were in their task, it teaches a very important message, that not just McDonald’s, but many other large companies should take on board.

People on social media seem to be the biggest fans, though, as there have been so many tweets flooding in about how great the prank is, and how the two should take this much further than just McDonald’s. Some people think that McDonald’s should employ them as models for future adverts, with the existing poster put up in every McDonald’s restaurant…

I want this to become a Thing.

You at a McDonald's? A Wendy's? A Whataburger? Notice that there aren't any poc on the walls? Take an advertisement-style photo with the food, and make a poster.

The more effort you put into it, the more likely you are to get away with it ? https://t.co/Hq2gdVIeaR

Call me crazy but I think @McDonalds ought to put this poster up in all of their restaurants https://t.co/FNsdqQFSSu

Some are admiring their creativity, some are wishing they had it in them to be this clever and successful and some are admitting to how even though they are adults, this prank definitely tickled them…

So proud of my people. #asianinvasion

i aspire to reach this level of extra https://t.co/5wazJh58L6

Sometimes I'll wonder if I just don't really care for pranks anymore because I'm an adult, but then there's occasionally one that's so wonderfully benign and creative that high school me has to tip my hat https://t.co/BH2S1jiMKb

It definitely got an A+ in our books, and we’re sure these two college students are going to pass their degrees with flying colors. If they’re lucky, they might even end up with marketing jobs straight away. We can only hope!

Do you think Jehv’s prank was creative? Do you have any good prank ideas that could go viral? Let us know in the comments, or on Twitter at @WhatsTrending.