The Sway House is one of the most popular TikTok content houses as it features the video-sharing app’s favorite male heartthrobs. However, the members are known for their rambunctious habits as they continually get into trouble.

After Sway hosted a huge party for Bryce Hall’s 21st birthday in the middle of a pandemic – causing the city to shut off their water and power – it seemed that the Sway boys were laying low and trying to not interfere with the law, but they just can’t stay out of trouble.

From large parties to drug charges, Sway member Bryce Hall is known for his partying and reckless behaviors – he profits off this reputation by selling “Party Animal University” merchandise.

Adding to his reputation, Hall tweeted out a video where he and other Sway members are involved in a fist fight with a man outside of a Mel’s Diner.

we don’t condone violence, but if you punch someone in front of us, we’ll have no choice but to defend ourselves. pic.twitter.com/2SC2MHLqhB

According to TMZ, the fight took place on September 23 after a drunk Sway member – Nick Bean – placed a cone under a man’s car. This act provoked the man to punch Bean in the face leading other Sway members to immediately attack the man to protect their friend. Eventually, law enforcement got involved and the two parties worked it out and agreed not to press any charges.

Last night, Hall decided to post the violent video causing people to swarm to social media as they tried to identify the people involved. After analyzing the video, most determined that Josh Richards and Jaden Hossler were throwing the punches while Bryce Hall and Jordan Rodriguez (Jrod) are seen pulling their friends off of the man in attempts to diffuse the situation. 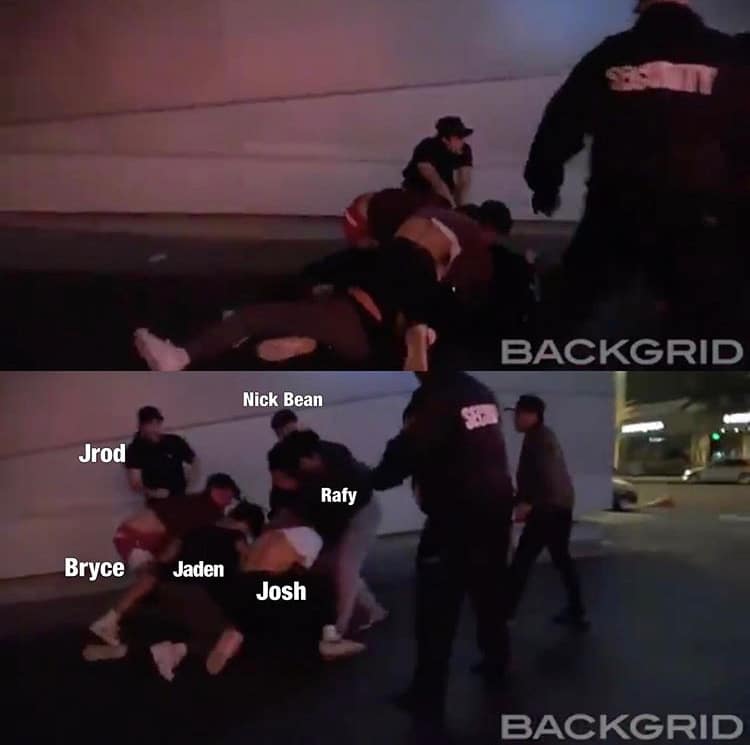 Hall has been caught in fights before, but many were shocked by Richards’s involvement as he is seen being very aggressive and throwing most of the punches. Richards’s behavior in the video contradicts his professional career as he has taken on many business ventures including co-founding Talent X and becoming the chief strategy officer for Triller.

The Sway boys may have been defending their friend, but their actions have a great impact on their fans.

TikTok attracts a younger crowd as tweens and teens look up to the personalities they watch daily on their screens. However, this puts pressure on popular creators like the Sway boys to serve as role models for their younger audience. But this video exhibits a different side of these influencers, and people are worried that their fanbase may imitate their bad behaviors.

embarassing, arent you suppose to be a role model

Bryce not much anymore !? This is really embarrassing, stop getting into so much drama, you fight with some policemen, this is already too much, can you one day stop entering bard? I think that with you it will not be possible.

that you bring your fans the images and you explain the situation it's ok and shows your honesty , but that's not the Bryce that I love.

Even though some are appalled by what they have seen, there are many who are coming to the Sway boys’ defense.

y’all who are saying this is embarrassing and that he shouldn’t be doing this are really stupid, They are trying to defend themselves and that’s what yu have to do in these kinds of situations

Recently, Bryce Hall has collaborated with Capital University in a new podcast about business and money management. Because Hall is starting to dip his toes into more mature and professional projects like the podcast, some are advising Hall to stop getting into trouble as this can negatively affect him in the future.

Is that what happens when on Ani Energy? But real talk, we gotta discuss this.

Can’t be going around doing this nonsense while trying to build generational wealth.

You should tell him to delete the fighting video now. It’s not good to keep this his page.

Instead of further addressing the situation, Hall took the opportunity to advertise his energy drink business with Richards in response to a comment suggesting their energy drink Ani Energy escalated the fight.

okay, second dad. we’ll talk tomorrow about it. but hey, at least people are starting to learn the power of https://t.co/uyluQbTQMB https://t.co/pPSgQUzetd

Others are showing their respect for Hall as they praise him for being honest with his followers and avoiding any misinterpretations from secondary sources.

No. he knew it was gonna get leaked one way or another. if he didnt and someone else did, the boys would be portrayed as "starting fight and are problematic" and the tea pages would twist evrything n make it seem they jumped someone. Bryce posting that, he cleared what happened

The Sway boys have been caught in many contentious circumstances in the past, but their controversies have allowed them to prosper in the social media world as people are addicted to drama – people are not entertained by normalcy.

However, is there limit?

The Sway boys are very young, and because TikTok is so new it is hard to tell if their actions will follow them into their adult lives. Also, we have to keep in mind the majority of TikTok users are very young, and they are being exposed to a lot of mature content that may influence them to act in coherence with these influencers as recklessness is being glorified.

Is there a way for influencers to make mistakes without jeopardizing the future for many young kids?

Do you think this situation was avoidable and could the Sway boys have handled it differently?