‘WAP’ rapper and Grammy award winning artist, Cardi B deleted her Twitter over the weekend. It is preceded by her controversial relationship with her Offset, as the two are in the middle of a divorce, and the backlash she received by fans after being spotted with him. 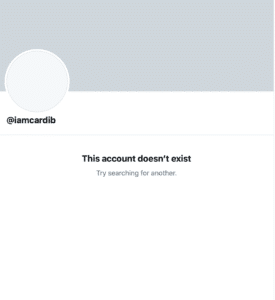 Cardi B has been the center of a lot celebrity drama this Summer. Between dropping ‘WAP’ with Meg Thee Stallion, and throwing a huge birthday party in Las Vegas in the middle of a pandemic, perhaps the most talked about is her relationship with musician, Offset. It was only last month, September, when the rappers’ announced they were filling for divorce after Cardi B insisted that the two had “just grew out of love” which was followed by several rumors of infidelity.

Despite announcing such a shocking revelation of their split, Cardi B was spotted with Offset at her controversial birthday party in Vegas last week, where he gifted her a Rolls Royce (pretty nice gift from an ex, right?) and they were caught exchanging some intimate kissing. Sounds like that divorce is not as irreconcilable as previously thought. As Cardi B once said, “That’s suspicious. That’s weird.”

This weekend, Cardi B had enough from haters attacking her for getting back together with the Migos rapper. She mentioned previously that the pressure she receives from strangers over the internet regarding their relationship was getting to her. In 2019, after the couple reconciled from their first major separation, Cardi B spoke to Vogue about the pressures of putting her relationship out into the cruel internet, “social media is telling you not to talk to that person because he cheated, you’re not really happy on the inside until you have the conversation. Then, if you get back with them, it’s like, how could you? You let all of us down.” Frankly, the rapper is done with the opinions of the Twitter-verse, leading her to delete her Twitter page over the weekend. And, of course, Twitter is talking about it.

Some Twitter users are defending Cardi B, after all, her relationship is between her and her family.

Braden brings up the valid point that who are we to judge? Be honest, you probably have had an on-and-off relationship with an ex before too. Cardi B just happens to live under a public microscope.

Wow y’all really made Cardi B delete her twitter because of her mistakes! I’m sorry since when were y’all perfect little human beings. How about we tell all y’all how to live and see how y’all like it. Smh 🤦🏽‍♂️

Y’all done made Cardi B delete her Twitter, y’all some Bullies🤦🏽‍♀️😂😂

Cardi b married, pays for her own stuff, and provides for her daughter

Worry about yourself people

DAMN YOU BITCHES REALLY MADE CARDI B DELETE HER TWITTER

While some are sympathizing with Cardi B’s decision, other are making memes and joking about it. Is it bad that we think they are pretty funny?

Wow Cardi B mentioning Ariana Grande for what ?
And how many times this girl gon delete her twitter? pic.twitter.com/sX0L4BwlEX

JC is referring to Cardi B’s instagram live on October 17th, where she talked about her decision to delete the app. She could not help but throw Ariana Grande under the bus while doing so. She said, “A whole bunch of 15-year-olds telling me how to live my life like I’m motherf**king Ariana Grande or something, like I came from Disney or something.”

People really seemed to latch onto the this part of the video. Ariana fans really came to her defense.

cardi b better keep my good sis Ariana name out her mouth pic.twitter.com/V4IwQBbkCt

This follower caught this part of the live and shared it. Warning: the video contains profanity.

cardi b is so dumb, what does being Ariana Grande or “coming from disney” have to do with this beef with your fans?? pic.twitter.com/2qCXUSHNBI

did cardi b really delete her twitter over this? 😭 she can name drop ariana but can’t take the heat that comes with it?

Other users just find it funny that someone so powerful could be bullied out of a platform over something so insignificant. Some are even referring to the fact that this is not Cardi B’s first time deleting a social media platform. Back in 2018, the rapper delete Instagram back in 2019 after the Grammy’s.

If you have not deleted a social media platform at least once, who even are you?

Maybe we no longer have Cardi B to follow on Twitter (even though she will probably be back anytime now), at least we got a few laughs out of all the chaos. Whether Offset and Cardi B get back together or not, is really none of our business. Sorry to all the people who love being involved in celebrity drama; it is a harsh reality. Imagine if your relationship was always in the limelight- every fight, every rumor, everything. It would be like having your in-laws following you around ALL. THE. TIME. I don’t know about you but my glass house is a little too be messy to be throwing stones. All we can do is hope that Cardi B and Offset make the best decision for themselves and their daughter, Kulture.