Claudia Conway is known for being very vocal on social media about her disapproval of the way her mother, Kellyanne Conway, handled the Coronavirus. Yet, within one month of testing positive for COVID-19, Claudia hosted a big sweet 16 party at her house with what looks to be dozens of people.

After seeing videos of Claudia’s party, she received major backlash on social media. People expressed their disappointment in her and called her a hypocrite.

Claudia wrote her response to the backlash on Snapchat. She explained masks were provided and everyone was fairly social distanced. Claudia wrote, “it got out of hand because people who were uninvited (we kept it small) showed up and we kicked everyone out. It got extremely out of hand and people I’ve never seen in my life showed up uninvited so we immediately kicked EVERYONE out.”

“I know lots of influencers who go to indoor parties with hundreds of people every weekend but y’all ain’t ready for that conversation- a lot of preparation went into this gathering to ensure the safety of everyone. Local authorities were completely aware of the gathering and ALL NEW JERSEY COVID GUIDELINES were followed,” she continued.

She finished off her statement by announcing that she will be taking a break from social media for the sake of her mental health. 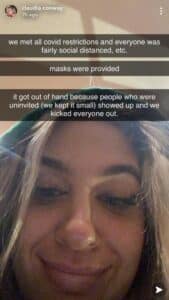 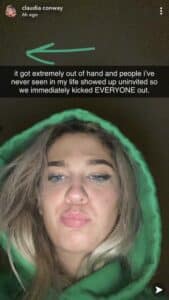 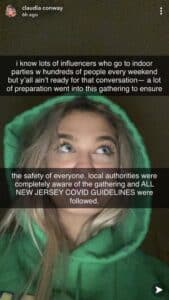 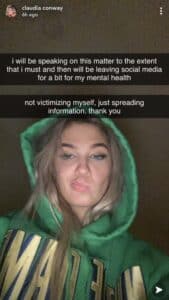 On October 16th, Claudia Conway threw a big sweet 16 party despite the world being in the middle of a pandemic. Videos posted to social media showed that there were dozens of guests that attended the party. People were packed together partying and little to no people were wearing masks despite Claudia’s statement.

Videos of the party seem to show the exact opposite of what Claudia had explained on Snapchat. Many people thought that was interesting to see considering how Claudia bashed her mother’s handling of the virus when they both contracted it.

The internet was so shocked about her choosing to host such a big party, people demanded she explained herself. In the mix of the backlash, Kellyanne Conway is also under fire for allowing such a party to go on.

After all, her mother had to be involved in the party planning. Since Claudia is a minor, it was said that her parents really should be the ones taking responsibility. Rather than enforce safety measures or not throw a party in the first place, Kellyanne Conway is seen partying with her daughter and her guests on video.

The backlash became so bad that Claudia made her TikTok account private before taking to Snapchat to explain her side of the story.

People seemed to be shocked and offended by the example Kellyanne was setting.

hmmmm,,, why is @KellyannePolls at a PARTY with a bunch of TEENAGERS in a GLOBAL PANDEMIC?? seems like a great example to me!! https://t.co/MnvAxrTyDp

Jesus. I know she’s only 15 but…her parents are the worst.

Please keep going after Claudia conway… I lost family members and she thinks it’s ok to throw a party pic.twitter.com/ATT8slgUCx

Claudia Conway has more than 1 million followers on TikTok. She posted a video saying that her mother lied to her about testing positive for COVID-19. After that video, she posted another one explaining that her mother didn’t lie to the family about her test results. Claudia recorded the video with her mother instructing her in the back so people believed the second video was a lie.

The video was watched over 2 million times with Claudia saying, “my mother claims that she did not lie to me. She had three tests done. First negative. Second two positive. We were not in communication. I misinterpreted it.”

After President Donald Trump announced that he had tested positive for coronavirus, Claudia posted on video on TikTok recalling that her mom was coughing a lot around their house. Later to find out that she tested positive.

Kellyanne announced her diagnosis on Twitter after Claudia had already broken the news on her TikTok account. The video already had millions of views. Conway said that she had a mild cough and mild symptoms.

Kellyanne Conway and her daughter were among several people to have tested positive due to being exposed to President Trump. At least eight other GOP officials who attended a White House Rose Garden event had also tested positive for COVID-19.

Coronavirus cases continue to rise in the United States and more videos are posted to social media showing influencers still attending parties. The parties are usually extremely packed and do not show any kind of COVID-19 compliance.

Along with Claudia Conway, many other influencers have received heavy backlash for throwing parties. Another TikTok star, Bryce Hall, had a few parties shut down. He even had his power shut off by Los Angeles Mayor Eric Garcetti because of repeatedly throwing house parties during this pandemic.

Rapper Cardi B had a birthday party in Las Vegas that also wasn’t COVID friendly. Many people have been disappointed to see how celebrities are handling the restrictions.

Singer Billie Eilish called out influencers and celebrities on her Instagram story. “Funny how I haven’t hugged my best friends in six months, and y’all are out here partying. Funny,” she said.

Celebrities and influencers alike seemed to have already made up their minds about partying during a pandemic, but what about you? Are parties out of hand, and need to be stopped immediately? Or, can parties be thrown provided they follow guidelines?