“Consent Is Something Super Important To Me”: David Dobrik Apologizes After Former Vlog Squad Member Accused Of Rape

An apology that backfired
By Stephanie Makri

On Tuesday night, David Dobrik finally addressed the sexual assault allegations involving himself and Jason Nash following Joseth Francois’s accusations. The YouTuber uploaded a short video titled “Let’s Talk” on his podcast channel lasting only two minutes and thirty seconds. The comments section and like-to-dislikes ratio were turned off, triggering many fiery responses on Twitter by angry users who criticized him for this action.

Though many allegations have reached the surface regarding his former Vlog Squad members, his main emphasis on the video was the idea of consent.

Insider published an investigation earlier on Tuesday that regarded allegations of rape from a woman featured in one of Dobrik’s videos in 2018. The claim referred to Dominykas Zeglaitis (aka Durte Dom) stating that she was involved in group sex she did not consent to during the filming of the video. Vlog Squad members gave her alcohol in an attempt to intoxicate her according to her sayings.

Once the video was edited by David Dobrik, it was uploaded to YouTube as a vlog called “SHE SHOULD NOT HAVE PLAYED WITH FIRE!!” The video was deleted at her request, after being watched 5 million times. The woman has asked to keep her “anonymity out of concern” speaking to Insider as she doesn’t want this story to affect her career in any way.

The woman told Insider, “I immediately felt really uncomfortable because I was under the impression that we were going to meet these cool creators, we were going to hang out, maybe film something. It was high pressure from the moment we walked in.”

She emphasized the pressure forced on her by Zeglaitis and the other members of the Vlog Squad as their main aim was to create content to objectify her.

“It was very much an environment where it felt like saying ‘no’ was not OK,” she said.

According to Insider’s investigation, after the woman was exhaustedly drunk, Zeglaitis took advantage of her state and engaged in sexual activity with her during a time she was blacked out by alcohol. One of her friends who was also there stated that she was drinking out of her own will at times, but there were surely moments he was trying to make her drink more. As the two were in the room, the other Vlog Squad members were trying to listen in and peak through, indicating a disturbing action by the “male gang.”

Dobrik was apparently one of the people who attempted to look into the room, automatically involving him into a situation where he could have stopped the act. This comes in contrast to his apology video which he emphasized the importance of consent. 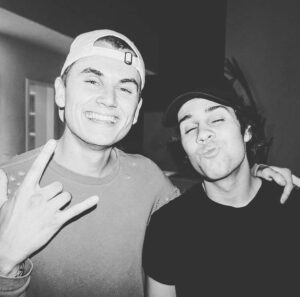 This morning, Wednesday, March 17th, Trisha Paytas gave viewers on her channel her own perspective on the David Dobrik story. She titled the video, “David turned off comments but I am not …” discussing her own experience. Even though Dobrik didn’t include Paytas in his apology, she did accuse him of including her in his sexual vlogs without her consent. In another incident, whilst dating Jason Nash in 2018, Dobrik hid in a hotel room while the two were having sex. Nash was aware of the prank that was taking place.

“There was no consent given,” she said. “Because I was dating Jason? Because I was a participant in the vlogs? That’s my consent? That was so traumatizing at the time.”

Even though Paytas asked Dobrik not to post the video back then, he still did, with the video currently having over 14 million views. Giving a statement to Insider, Dobrik’s lawyer said “‘if ’ this did happen, David did nothing wrong.” Paytas responded boldly saying, “It’s David’s vlog. David published it. David coerced it. David had his friends go out and do shit for him.”

She also took to Twitter posting a series of Tweets about Dobrik. Users immediately supported her by  commenting using words such as “destroy” and “demolish” aiming at the former Vlog Squad leader.

David Dobrik’s “apology” pisses me off more than anything. Ppl who know all the stories (ones not even relating to my own)know this is the worst way to handle it. YOU. RUINED. PEOPLES.LIVES.and instead of apologizing ,u double down and show texts trying to prove consent

David Dobrik’s name was fast to hit Twitter’s trending hashtags with users trolling the YouTuber after his apology video. The comments varied from the fact that Dobrik named the video to “Let’s Talk” and disabling the comments, to his remark on consent which many mocked as it was something he went completely against.

"Consent is something that's super, super important to me" pic.twitter.com/ocas1XBO3H

cancel culture is toxic but stop giving celebrities like David Dobrik, James Charles, the Lopez brothers, etc a platform when people have come forward with allegations involving [email protected], gr00ming, and shit. I'm sick and tired of it. pic.twitter.com/GkFtctdteR

When David Dobrik titles his apology "Let's talk" but then disables the comments pic.twitter.com/qDv0tLmRj5

Some may call him a “victim” of cancel culture, however others find no excuse in forgiving all he has been accused of as he was an active participant of situations revolving rape and sexual assault.