If you don’t know who David Dobrik is, you might be living under a rock at this point. David, better known as king of the vlog squad, has been giving out cars like candy in the past few years. Whether it be to his friends or someone in need, it seems like there has always been a sponsor to help him give someone something they never dreamt of receiving.

This week, David announced on his instagram something entirely different than he has done before. Well, kind of. Dobrik is one of the most popular YouTube Vloggers with more than 18 million subscribers on YouTube, and millions more followers on every major social platform, and now he is giving away five Teslas. Yes, you heard right, five.

Hi!! HeadCount and I are giving away 5 Teslas to you guys!! All you have to do is share this to your story, tag a friend in the comments and make sure you’re good to vote at my link in bio!! Winners will be announced Monday. Good luck!! @headcountorg No purchase or reg necessary. Exclusions apply. Terms and conditions here:http://bit.ly/345p93f #join2020vote #GoodToVote

Over the last year or so Dobrik Has opened up about his family’s journey to the US, and sharing his own personal story about being a DACA recipient. In the past Dobrik has embraced his DACA status and has surprised DACA families with cool cash prizes and gifts.

But lately Dobrik has been taking a more sizable role in the political conversation by encouraging young people to go out and vote since he himself is unable to.

This shift started to occur earlier this year when the Trump administration took steps to curb/end the DACA program which protects people like Dobrik who grew up in the US.

With the help of none other than headcount.org, David is driving home a key issue overall of something that is important to him and many others in the United States. Other YouTube stars like Lily Singh have chimed in on how they can’t vote because they aren’t a citizen of the United States, but it looks like this post is garnering a lot more attention than any others it seems like. The post has gained HUGE traction on the internet with over 2.3 million likes on Instagram, with over 1.1 million comments on his original post.

Response to the giveaway has been huge all across social media. Obviously people have been sharing his post like crazy on Instagram, but people online had a lot to say about the giveaway and Dobrik himself as well. One user tweeted, “NOT ppl trying to win a david dobrik tesla right now … don’t we have human rights to worry about?”

While there was some dissent about the Dobrik giveaway the response was largely positive with millions of comments, re-tweets, and praise for the vlogger summed up best via this tweet: “Influencers doing good. David Dobrik is giving away 5 Teslas to get people to vote. Yet he is not an American citizen.” 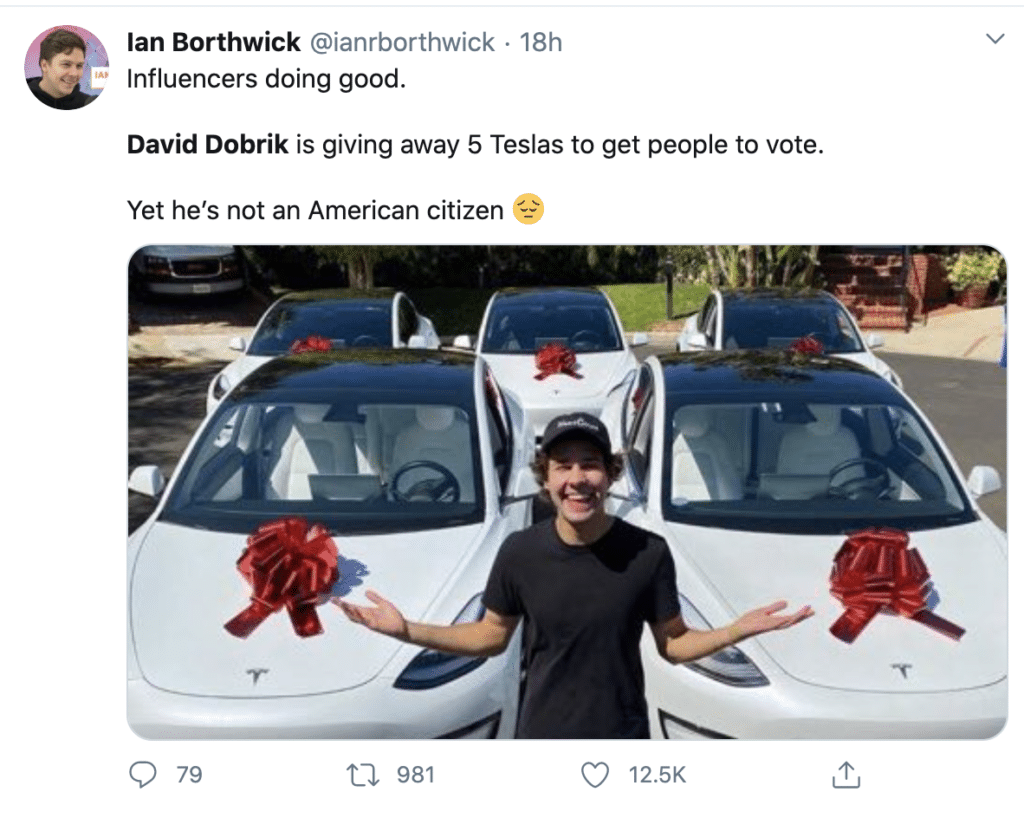 It’s important to note that overall a lot of fans do watch his channel and they have seen the journey of someone like him face deportation issues and more due to people like President Trump. David, someone who is a big advocate of the DACA program, would be deported if indeed the current administration strips away his rights as a citizen in the United States.

David has a lot of content that has fans sometimes questioning how he is able to really give away prizes like this, but many people are not questioning this one. From his frequent sponsors of Chipotle and Seatgeek and obviously many more, fans have the right to believe that overall they are truly paying his bills, or helping you all get free cars. People have called it into question because his videos do not get monetized next the other standard creators but needless to say that isn’t really coming into question at this time.

So we say go get yourself a Tesla and comment, share do all the things really! The next thing you know if that David might end up giving away $100,000. Who knows at this point.