February 5, 2021, FX and Hulu released the documentary Framing Britney which brings awareness to the highly talked about topic of Britney Spears conservatorship with her father that started in 2008 and the struggles within her career. What has also came out of the documentary is a resurfaced interview with Britney and Diane Sawyer that have made a lot of people outraged  and demanding an apology from Sawyer.

In the 2003 Primetime interview, Britney is sat down with Diane Sawyer to ultimately discuss Britney’s career and what she had been through the past year. The clip from the Free Britney documentary shows the inappropriate questions asked to Spear’s and the automatic blame put onto her by Sawyer.

Embed from Getty Images
“You did something that caused him so much pain, so much suffering.” “What did you do?” Sawyer asked.

Rumors flourished at the time that Britney had cheated on Timberlake during the relationship, but nothing was ever confirmed. Without being asked about her side of the story and her feelings, Britney gives a thoughtful and simple response to the accusation.
Embed from Getty Images

“I think we were both really young and it was kind of meant to happen, and I will always love him. He will always have a special place in my heart.” Spear’s stated trying to clear up  the subject once and for all.

Unfortunately, the harshness from Sawyer didn’t stop there. Sawyer goes on to talk about the quote from Kendall Ehrlich, the first lady of Maryland at the time. Ehrlich sparked controversy when she was speaking at an anti-domestic violence conference and stated that “..if I had an opportunity to shoot Britney Spears, I think I would.” 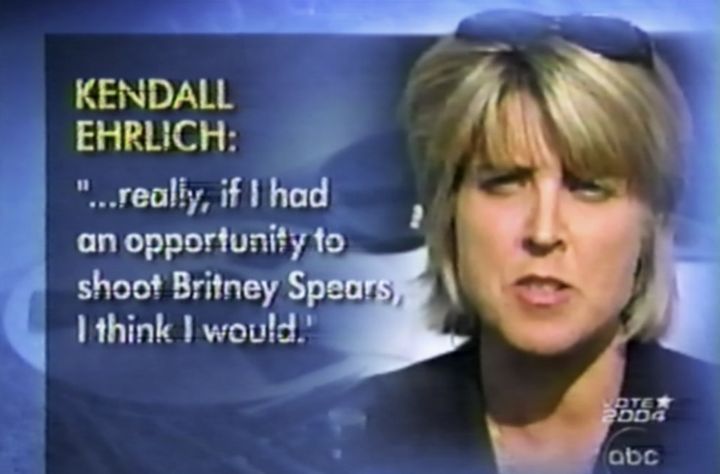 Sawyer goes on to defend the horrible comment made by Ehrlich by saying it’s “Because  of the example for kids and how hard it is to be a parent.”

Spears, defending herself, responds by saying that “I’m not here to, you know, babysit her kids.”

Diane Sawyer asked Britney Spears what she did to cause Justin pain, then told her the Governor of Maryland’s wife wanted to shoot her, implying it’s Britney’s fault because she’s a bad role model to kids. I don’t care how long has passed-Diane Sawyer should be ashamed of herself

The Conversation This Has Created

After watching the interview, many are concerned about how Spears was mistreated and falsely portrayed by the media. This sparked the conversation of sexism in Hollywood and the non-existing boundaries between paparazzi and Spears through her career.

Watching that @britneyspears movie reminded me how badly women were treated in the 1990s, like the innate misogyny was incredible.

At the time, Spears was only 22 years old, which is concerning to many people that she would be asked about her sex life and personal relationships in a public interview. With all of her scandal’s being one sided, Spears always being at fault according to the media, we can’t help but notice the unfairness to her. A look into how she was constantly stalked by paparazzi and the remarks made towards her are making people wonder if Hollywood has changed and if this kind of behavior would be tolerated in society today.