The Hype House and Sway House have proved to be massive successes as many people are still obsessed with their members, and profit-earning content. Because of this, many other TikTokers want a taste of their success, which has led to the creation of other content houses such as the Clubhouse and NotaContentHouse. However, some people believe that there are now too many TikTok houses and their content is repetitive and similar to the original houses. But now there is a NEW content house in the works that welcomes a wider variety of content.

In a recent interview with ‘Seekerstime,’ TikToker Devin Caherly revealed that he is working with Tati Mitchell and Duke Depp (aka Willy Wonka) on a new content house. After the article came out, Cahlery confirmed it on TikTok.

Caherly’s account gained some initial traction from his relatable POVs that resonated with college students as he attended University of Arizona.

His fan base widened when his content shifted to more general POVs after moving back home to New Jersey due to the current pandemic.

However, Caherly’s followers soared to 2.7 million after Tati Mitchell began duetting his videos leading fans to ship them as “Tevin.”

Mitchell only began posting on TikTok at the end of May, but she quickly rose to TikTok fame with 4 million followers because of her relatable videos. After receiving a lot of attention on her hilarious duets, she created a viral sound of her saying, “he has no lips…” This original sound has now been used by many famous creators on the platform, including James Charles.

♬ all credit to TATI – lildshef

Not only do fans love Tati’s videos, but her Lives are very entertaining. Lives are where users can utilize the livestream feature on the app to engage with fans. During her Lives, Mitchell interacts with fans on the video chat website Omegle and pranks random people on the site to keep her followers laughing at all times.

After “duetting”  with each other numerous times, Mitchell eventually flew from Michigan to New Jersey in July to visit Caherly so they could finally collaborate in person.

Now, as they work on their new content house, Willy Wonka has made this duo a trio by joining their collaboration.

Willy Wonka originally became TikTok famous after he posted a video of himself doing Professor Kar’s dance to “I Wanna Love You” by Akon featuring Snoop Dogg. This led to a TikTok craze as many perceive him as a “sexy” version of Willy Wonka. Since that video went viral and hit over 90 million views, everyone is obsessed with his account leading him to gain 12 million followers in just a few months.

when the chocolate buisness dies down #willywonka

With these three TikTokers gaining a lot of hype, they have decided to move to a house in Los Angeles and collaborate with each other as well as other popular TikTok creators. The other members of the content house have not been confirmed, but there are some potential members who have been making a lot of videos at the house within the last couple of days.

One of the potential house members is TikTok user Lex. Lex’s content is particularly popular with students, as she pretends to be teachers, counselors, and principals. Her depictions of their behaviors are quite accurate, which has helped her to gain over a million followers. Who doesn’t enjoy watching someone make fun of the adults you despised in school?

Three other TikTokers who have been making videos at the new house are dancers Mikaila Murphy, Keara Wilson, and Cassidy Condie. Murphy is most known for spreading body positivity and showing off her twerking skills.

He’s me doing this without smacking my shelf this time😂

Wilson is considered a TikTok legend, as she is responsible for choreographing the dance to the song ‘Savage’ by Megan Thee Stallion. Her original video of the dance has over 56 million views.

NEW DANCE ALERT! 🚨 if u use my dance tag me so i can see🤗 @theestallion #writethelyrics #PlayWithLife #foyou #fyp #foryoupage #newdance #savage

After the ‘Savage’ dance went viral, Beyonce added herself to the song, and Condie choreographed a popular dance to Queen B’s verse. Many famous TikTokers including Addison Rae performed Condie’s dance. And of course, as all dance TikToker’s are known for, Condie is also known for crushing the platform’s beloved dance trends.

SAVAGE ROUND ✌🏼? New Dance challenge for 👑🐝 cause she DID THAT. #savageremix

In addition to these TikTokers, Sway House member Bryce Hall expressed interest in joining the content house. Recently, Caherly posted a text from Hall on TikTok where Hall asked to join the house. However, it is hard to tell how serious Hall was in his request. It seems Caherly has no intention of letting Hall join from his reaction at the end of the video and the comments. 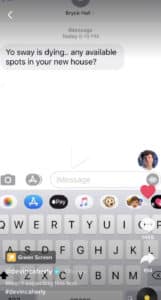 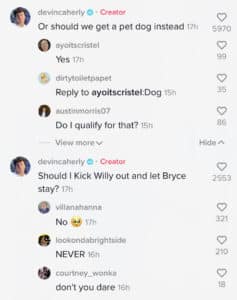 As they get cozy in their new Los Angeles home, the house members have been collaborating with each other throughout the week as they create excitement for their new project.

♬ For the night – jeffxtingz

While the new content house does not have an official name yet, we can expect it to be announced very soon. Devin told a fan to keep an eye out for a house tour on his YouTube channel.

Many fans are very excited for this house as it features a variety of content and involves many up and coming TikTokers.

Could this be an actual good TikTok collab house? Are you excited for this new content house? Who do you want to join?