After Dixie D’Amelio released her debut song ‘Be Happy’ in July, D’amelio received lots of attention and success as the video received almost 100 million views, which paved her path to the music industry. Since the initial release, she has done multiple remixes of the song including the one with Lil Mosey and blackbear. But after 5 months of profiting off of one song, it was time to write a new one.

In the music video, D’Amelio begins by releasing her stress through hitting a junk car representing the “one whole day [she] was really really really sad.” Then, she is relieved from her sadness and is able to enjoy life with her friends. At a diner, D’Amelio hugs Wiz Khalifa to introduce his verse in the song, and briefly we can see D’Amelio’s sister and boyfriend – Charli D’Amelio and Noah Beck – as well as her friend and Hype House member Ryland Storms.

During the livestream for the premiere, D’Amelio revealed that the song is about a toxic person in her life and when they left she was only sad for “one whole day.”

Though the song is catchy, D’Amelio received an overwhelming amount of hate as people were not fans of the preview and lyric – “One day one day I was really really really sad.”

Many jokingly said the song’s lyrics seem like she is trying to meet a word count by repeating “really” in the chorus.

Some are claiming that the song sounds like it was written by a little kid because the lyrics are very simple and basic.

Others made fun of her singing as they hear “neigh” instead of “day” in the song.

Because both of D’Amelio’s songs revolve around sadness, some are bullying D’Amelio for the common themes in her music.

Even D’Amelio’s nemesis – Trisha Paytas – decided to contribute to the hate by sarcastically commenting on D’amelio’s lyrics.

After all the hate and bullying for just a small snippet of the song, D’Amelio took it down and tweeted that she is losing passion in doing the things she loves because of people’s negative comments.

BREAKING NEWS THAT WILL MOST DEFINITELY CHANGE YOUR LIFE: Dixie D’Amelio posts teaser to new song with Wiz Khalifa on TikTok. Gets roasted by fans. Responds on Twitter saying “I literally can’t be excited about ANYTHING LOL,” then deletes TikTok. pic.twitter.com/oWOOrsTlRB

Celebrities’ true feelings and reactions to comments are often hidden from the public, but it is obvious that Dixie D’Amelio was going through a tough time and D’Amelio’s mom, Heidi, was not going to stand by and watch her daughter suffer. Heidi decided to jump-in to defend her daughter on Instagram in a lengthy post where she explains how Dixie put in a lot of work into her music and encourages others to follow their passions, but made sure to denounce haters by calling them “weak” and “pathetic.” 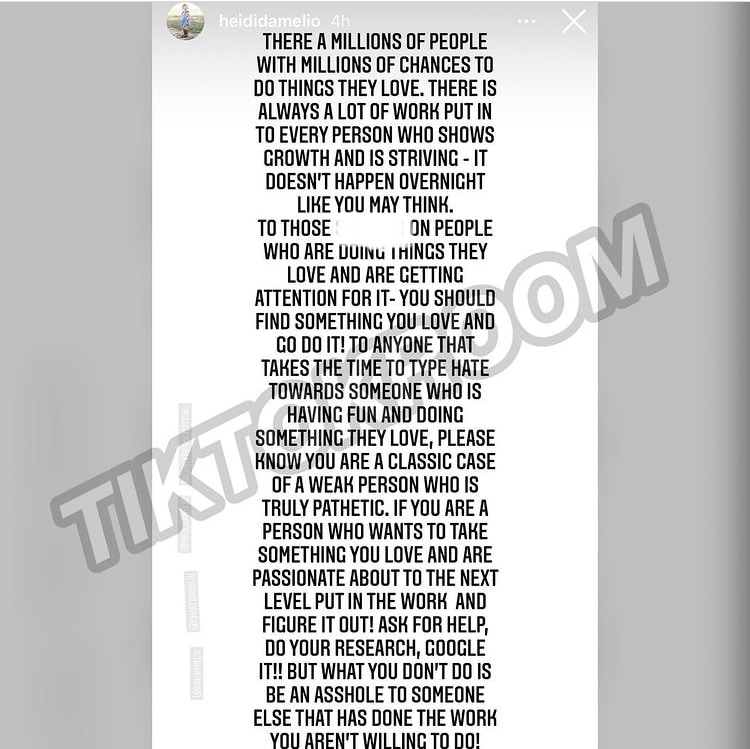 Dixie D’Amelio finally decided to ignore her haters and re-post the preview, but with a bit more than just one line.

However, one TikTok user accused D’Amelio of stealing his song leading another TikTok user to duet his video to state that he thinks the small artist’s song is better than D’Amelio’s because hers “sucks.” Because the video received a lot of attention, D’Amelio decided to duet the second video to ask for people to stop bullying her and in the video fake cries to add a bit of humor to her clap back.

Reactions to Full Release of ‘One Whole Day’

When D’Amelio finally released the full song, many began to shed her with love, including her good friend James Charles.

However, Twitter users are comparing ‘One Whole Day’ to the most hated songs of all time – ‘Friday’ by Rebecca Black and ‘It’s Everyday Bro’ by Jake Paul.

And some have begun to hate on Wiz Khalifa for being on the song.

Wiz Khalifa really made a song with Dixie D’Amelio and a music video with a bunch of tiktokers my age. 2020 is definitely going out sad.

Similar to D’Amelio’s ‘Be Happy,’ many are categorizing ‘One Whole Day’ as a Justice store aesthetic.

In addition to the existing hate, Trisha Paytas posted a TikTok shortly after the song was released to once again hate on D’Amelio by referencing their feud from a couple weeks ago.

But there are some who have regretfully grown to like D’Amelio’s new song for its catchiness.

TikTok is the worst because now I have Dixie D'Amelio's new song stuck in my head pic.twitter.com/kKMSXCgcq6

And D’Amelio’s fans are defending D’Amelio against her haters.

To all of the people criticizing the new song of @dixiedamelio , have you considered this – The people who are busy hating are NOT busy creating anything! Do you want to be a hater or a creator? At the end of the day the only ones worth listening to are the creators 💕

Everyone saying that this song is bad and basic cause it's Dixie D'Amelio while listening to Positions by Ariana (not hating cause I'm a fan of her too). Keep your mean comments for yourself, u don't have to follow her or anyone else. If you're here maybe you cares somehow 😳

With the release of just two songs, it is evident that despite the hate D’amelio’s music career is skyrocketing as some were shocked to learn that she has more monthly listeners than many popular artists including Louis Tomlinson.

dixie d’amelio has more monthly listeners than louis??? WHAT THE FUCK pic.twitter.com/hR1QRgEBUr

Even though D’Amelio’s song may seem “basic,” the hate she received just attracted more attention to her song and forced the catchy songs to become stuck in people’s heads. Being in the public eye, comes with its pros and cons, but sometimes the cons can turn into pros as within just a few hours of the full release, the music video has over 1 million views.

What are your thoughts on Dixie’s new song? Are catchy songs always good songs?