Emma Roberts had a quite memorable pregnancy reveal. In an interview with Jimmy Kimmel, the 29-year-old actress recalled how she blocked her own mom on social media after she accidentally revealed her pregnancy.

Roberts explained that her mom, Kelly Cunningham, owned a flip phone until three years ago, so she decided to gift her an iPhone for Mother’s Day.

The American Horror Story star went on to regret her decision, and said it was “the worst thing I ever did.”

Roberts revealed she realized she had made a mistake after her mom set up Google Alerts on her.

Things took a turn for the worse when Cunningham got on Instagram. The proud mom soon accumulated a couple thousand followers, and it didn’t take long before she was interacting with her daughter’s fans.

Unaware that Roberts was trying to keep her pregnancy a secret from the media for the time being, Cunningham was already confirming the news online. When someone commented asking if Roberts was pregnant, Cunningham replied “Yes!” And when other followers commented congratulating the family, Cunningham thanked them for the well-wishes.

“Thank you so much! Very excited.” She wrote to another commenter about the baby news. To make matters worse,  the 29 year old celeb was on a plane at the time when she found out her mom had spilled the beans on her pregnancy. “And I found it all out on a plane. So, I couldn’t get to her. Like, I couldn’t call her or attack her. I could just iMessage with her and DM her and ask her to please stop,” Roberts said, and called the situation “a disaster.”

Cunningham didn’t seem to understand why her daughter was so upset, since she thought Roberts had already announced the news. “When I said to her, ‘Mom, you revealed my pregnancy,’ she goes, ‘Emma, you announced it,'” Roberts said. “I said, ‘No, I didn’t. That was a tabloid.’ She’s like, ‘Oh, that wasn’t clear.'”

The mother-to-be said that the pair laughed about the misunderstanding, but then “kind of got into a fight.”

Roberts revealed she blocked Cunningham at one point, saying it was her “only weapon.”  It didn’t last long though, and the Scream Queens star later unblocked her mom. Roberts joked that “It’s been an Instagram war with my mother that I never saw coming,” but added that it will make  “A good story to tell the baby.”

While Roberts didn’t get to break the news of her pregnancy, she was able to announce the gender of the baby a few months later.

Roberts shared that she was surprised when she found out she was having a boy. “I was convinced I was having a girl to a point where I said to my boyfriend, I was like, ‘If it’s a boy, you can name it.’ Meanwhile being like, ‘It’s a girl. So, who cares? Like, now I get to name it,'” she said. “When we found out, he was like, ‘Oh yeah, so you said I get to name him.’ And I was like, ‘I did say that, didn’t I? It’s so funny that I said that.'” 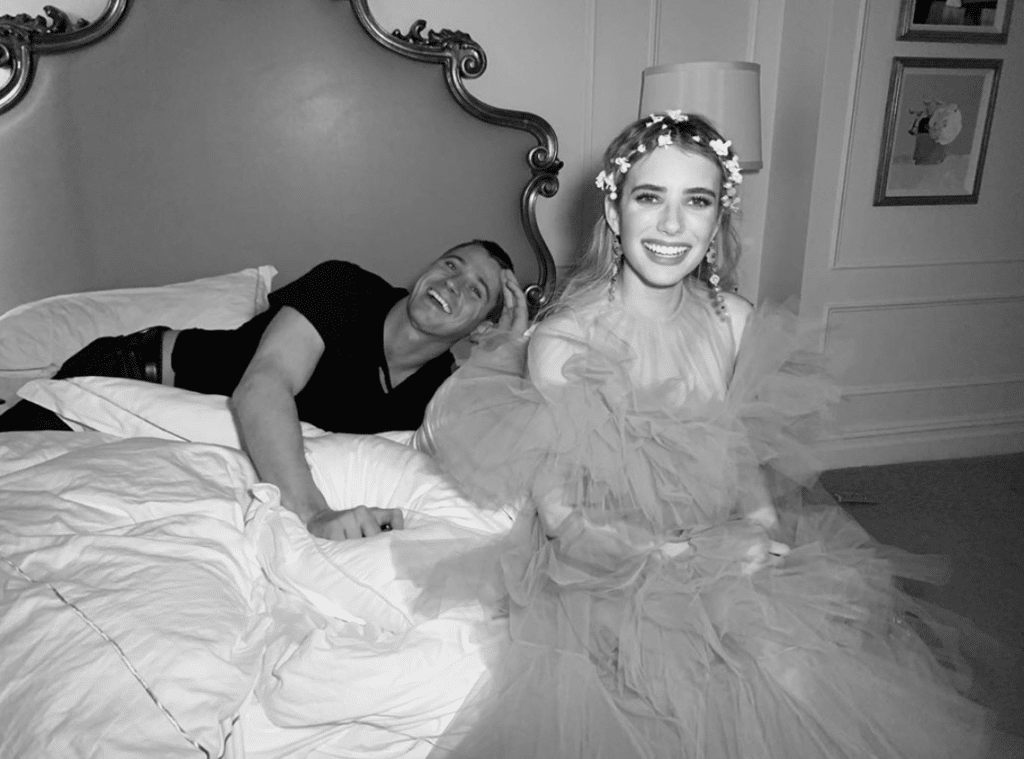 “All of mine got vetoed for various reasons, which I was very upset about,” the actress said about her list of baby names. Luckily, boyfriend Garrett Hedlund picked a good one, according to Roberts.  “He came up with a winner that was really good,” she said.

The Scream Queens celeb wouldn’t say what name it was, but she did reveal that she still has “a few more months” before they welcome their first child.