Rapper Bobby Shmurda’s conditional release date was moved up to February 23rd…tomorrow. His friends, family, and supporters flood the internet with their excitement. The rapper is being released 10 months earlier than his original release date. 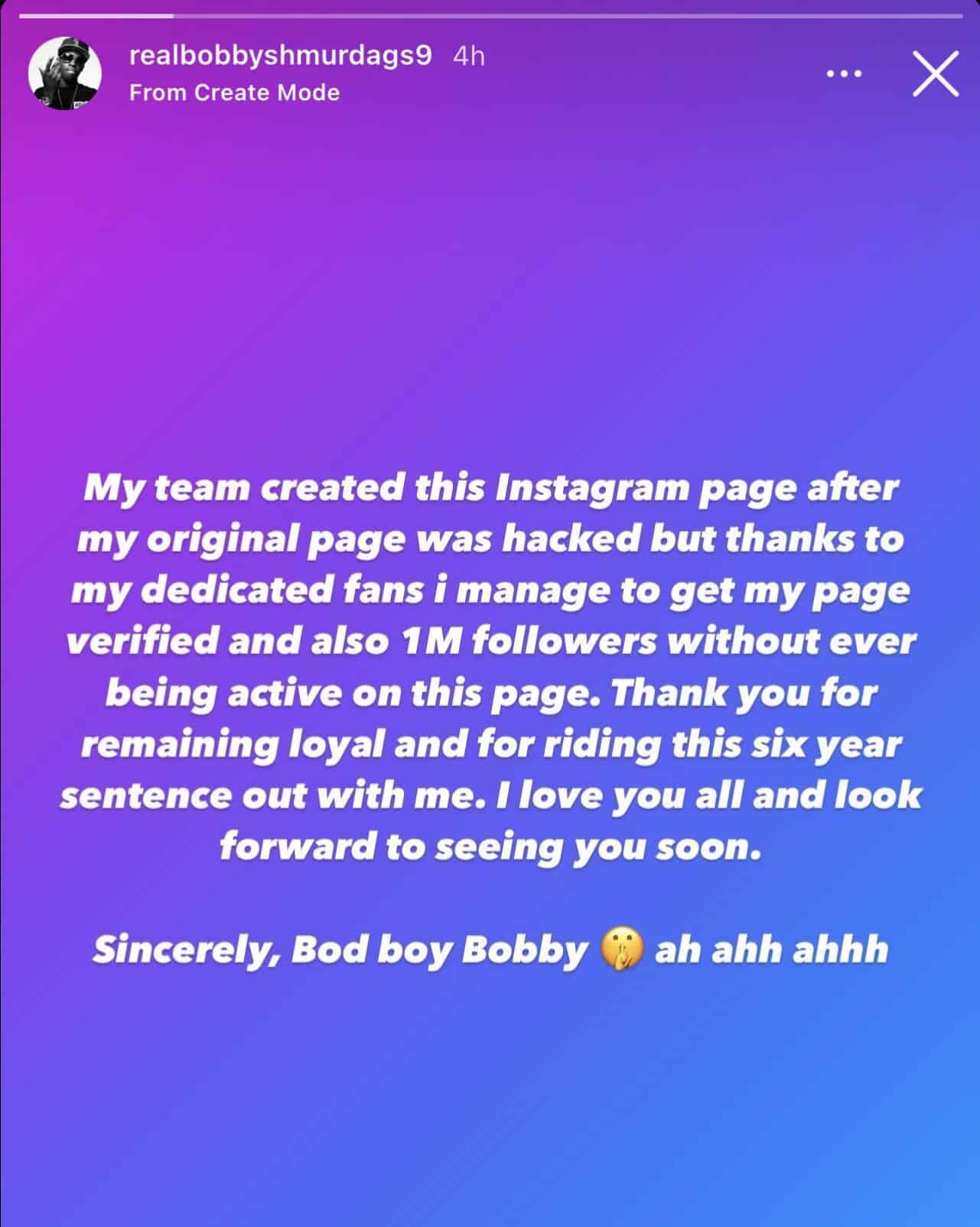 Shmurda released a statement on his Instagram story thanking his fans for their support while he served his six-year sentence. “I love you all and look forward to seeing you soon.”

His release is only a couple of months after his friend and co-defendant Rowdy Rebel. The fellow rapper was released in December. In an interview, Rebel let fans know that Bobby Shmurda was going to be released this week.

The plan when Bobby Shmurda is released from prison is just a relaxed night. His mother Leslie Pollard, told TMZ that Bobby will be spending some quality time with his family and a nice dinner. Unlike rapper Gucci Mane, he will be taking it slow when getting back into making more music.
Gucci Mane went straight to the studio after being released from prison but Shmurda will enjoy his family time before he does anything else. His mother told TMZ that she’s very excited for her son’s release and her son is as well.
Since the rapper has been in prison since 2014 he wants to his night lowkey. He’s ready to jump back into music which his mother says is what the rapper plans to spend most of his time doing. His fans are eager for him to jump back into the music game.
A close friend and fellow rapper Quavo told Billboard that he will be the one to pick up Shmurda from New York’s Clinton Correctional Facility. He was happy to say, “I’m going to get my guy.”
“I’m personally gonna go pick up Bobby Shmurda. I’m bout to go get him. I’m gonna let him show you how I’m gonna pick him up, yessir,” the rapper added.

Bobby Shmurda’s fans are overjoyed with the anticipation of the rapper’s return home. After what was a very hard year for everyone, people are saying this is just the kind of good news people needed. Shmurda is trending on Twitter as many people reminisce on his hits back in 2014. Fans are eagerly waiting for what the rapper will be coming out with next.

Users are comparing the news about Daft Punk split up with the news of Bobby Shmurda being released.

Daft Punk ending their career so Bobby Shmurda could be released pic.twitter.com/YOh4OpWt7t

Fans show their love for the rapper and can’t help but be excited for his upcoming music.

bobby shmurda out?? the energy has shifted (in a good way this time)

While this user wants to reflect on Bobby Shmurda’s case. She tweets out reminding people of the details of the case letting people know to not forget just because you are excited about his release.

Bobby Shmurda could’ve been a free man, but he decided to take 7 years, so that Rowdy Rebel could receive 7 years instead of 12 years. Throughout his time in prison he sued the NYPD & said he felt targeted due to his music.

Let this remind you of how twisted the system is.

Another user jokes about the possibility that Shmurda’s new music could flop but regardless people shouldn’t point it out.

If the new Bobby Shmurda joint don’t hit keep that to yourself we bumping it like this pic.twitter.com/Cw1NoIKiWZ

Many users were happy to remember the rapper when he first became popular back in 2014. The joy it brought so many of his fans to listen to his songs and of course do the Schmoney Dance.

Had to run this one back from 2014 Bobby Shmurda had the streets litty 💸 pic.twitter.com/o6Ypzaborf

In 2014, 19-year-old rapper Bobby Shmurda became a viral sensation for songs like, “Hot Boy” and “Bobby B*tch”.  With “Hot Boy” being his breakthrough hit, it also made popular his dance The Shmoney Dance. The rapper from East Flatbush became wildly popular and fans loved the music he made.

Shmurda fell out of the spotlight when he was arrested. The rapper has spent the last six years serving time for illegal firearm and conspiracy charges. These charges were part of a major police takedown including his co-defendant Rowdy Rebel. His arrest in December of 2014 was shortly after he was signed to Epic Records.

Although Bobby Shmurda was in jail, his fans continued to support his music and anticipated his return. The campaign #FreeBobby on social media began to take off. People discussed his dedication to his crew GS9 that he showed throughout his trial. The trial was analyzed by many taking a look at things like RICO-like conspiracy charges that are being weaponized in communities of color. It also examines the criminalization of hip-hop personas.

In September of 2020, Bobby Shmurda was up for early parole. The early parole was for December but it was denied. The New State Department of Corrections and Community Supervision has granted the rapper a conditional release on Tuesday, February 23, 2021.

The anticipation for Shmurda to be back into the music game is strong. Some have questioned what his music will look like in this year’s music atmosphere but his friends and fellow rappers are confident he will jump right into it.
Rowdy Rebel told Hot 97 that he thinks Shmurda will be ready for Summer Jam. “I normally wouldn’t speak on my brother’s behalf, but I know my brother ain’t gonna miss Summer Jam…Some things are just mandatory, and Sumer Jam is mandatory.”
Rapper Quavo from the trio Migos is confident in Bobby Shmurda’s hip-hop comeback. “It’s gonna be big,” he said in an interview.
The rapper’s mother wanted to let fans know that he wants to jump right into his music but that his main priority is maintaining the regulations of his conditional release. Things like checking in with his parole officer which the rapper will have to do regularly. Shmurda will be on parole until 2026.
Are you excited for the rapper’s return to hip-hop?