Facebook has come under a lot of criticism over the last few years for not doing nearly enough to stop the spread of misinformation and hate speech online. Just a couple of years ago the company was mired in controversy for refusing to do something about content spreading false information about the Holocaust on their platform.

In July 2018, Facebook CEO Mark Zuckerberg, who is Jewish, said that he finds Holocaust denialism  “deeply offensive,” but also asserted that he didn’t “believe that our platform should take that down because I think there are things that different people get wrong.”  He also tried to justify his stance by saying that the platform must allow for the possibility of users making unintentional mistakes. This response earned him considerable backlash from the public, who felt the CEO should have done more to limit the spread of this kind of misinformation and problematic speech. A campaign called #NoDenyingIt shared multiple survivors’ stories of the genocide, and urged the company to start removing content that denied the Holocaust. Eva Schloss, an Auschwitz survivor, recorded a message meant for Zuckerberg: “In Germany or in Austria people go to prison if they deny the Holocaust because they know it’s a lie, it’s libel.” 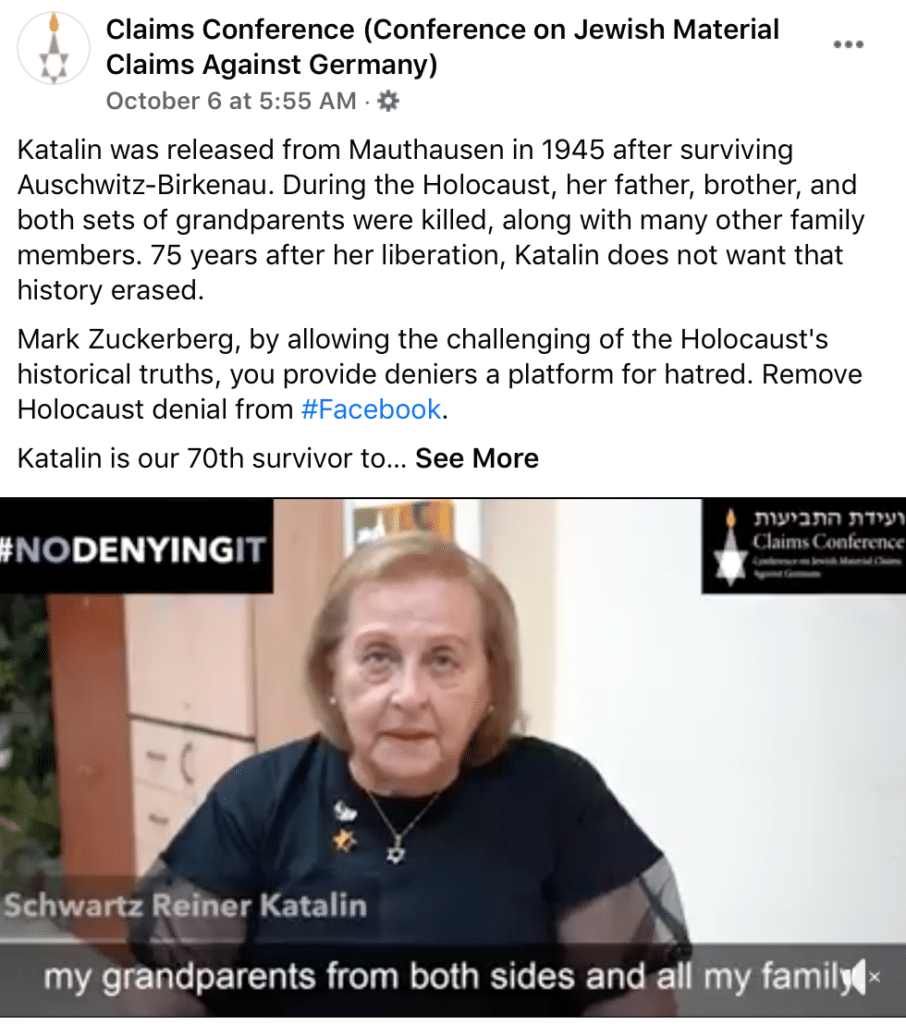 In a reversal of its earlier policy, Facebook announced this Monday that  it will now start banning content that “denies or distorts the Holocaust.” Zuckerberg also announced the change in his own social media, in which he  seemed to reference the controversy his past decision had raised: “I’ve struggled with the tension between standing for free expression and the harm caused by minimizing or denying the horror of the Holocaust.”  In his post he also explained why the sudden change of heart : “My own thinking has evolved as I’ve seen data showing an increase in anti-Semitic violence, as have our wider policies on hate speech. Drawing the right lines between what is and isn’t acceptable speech isn’t straightforward, but with the current state of the world, I believe this is the right balance.”  he wrote.

Facebook explained the decision was motivated by the “well-documented rise in anti-semitism globally, and the alarming level of ignorance surrounding the Holocaust.” The company cited a recent survey that showed that almost a quarter of adults in the US aged 18-39, said they believed the Holocaust was a myth, that it had been exaggerated or they weren’t sure.

As well as banning content that denies the horrors of the Holocaust, Facebook will start directing users to “credible information” if they search for terms associated with the Holocaust or its denial on the social media platform.  Facebook has announced it has also banned anti-Semitic stereotypes “about the collective power of Jews that often depicts them running the world or its major institutions.” Facebook has also warned that enforcing the ban cannot happen overnight, explaining that “there is a range of content that violates these policies and it will take some time to train our reviewers and systems on enforcement”.

But the change in policy is a good step towards diminishing the amount of misinformation spread online and the growing problem of hate speech. Zuckerberg has long justified Facebook’s lax policies regarding hate speech and false information by  maintaining that Facebook is not an “arbiter of truth”. But it seems the company is finally revising its policies to take more responsibility for what gets disseminated on their platform. In fact, in the post announcing the change to its policy regarding Holocaust denial content, the company revealed it has banned more than 250 white supremacist organizations and in the second quarter of this year alone they have taken down 22.5 million pieces of hate speech from their platform. They have also recently banned all QAnon groups and just last week Facebook removed a post by President Donald Trump in which he claimed coronavirus is less deadly than the seasonal flu, which is misleading and wildly inaccurate.