In August Facebook launched what CEO Mark Zuckerberg called, “the largest voting information campaign in US history.” The campaign had as its goal to encourage people to register to vote, and included basic information on voter registration and notes on how to cast a ballot by mail. Zuckerberg had announced the campaign in June, saying,  “first, we’re encouraging people to vote. Voting is voice. It’s the single most powerful expression of democracy.” The Facebook CEO also added that, “I believe Facebook has a responsibility not just to prevent voter suppression — which disproportionately targets people of color — but also to actively support well-informed voter engagement, registration and turnout.”

To this end, Zuckerberg said the company created a new Voting Information Center “with authoritative information, including how and when to vote, as well as details about voter registration, voting by mail and information about early voting. We’ll also include posts from state election officials and verified local election authorities. We’ll show this center at the top of the Facebook News Feed and on Instagram to make sure everyone gets a chance to see it.”

According to the company, their efforts led to 4.4 million registrations across the company’s social media platforms.  This was announced on Monday by Zuckerberg, who also thanked Facebook’s civic engagement and civic integrity teams for the accomplishment. 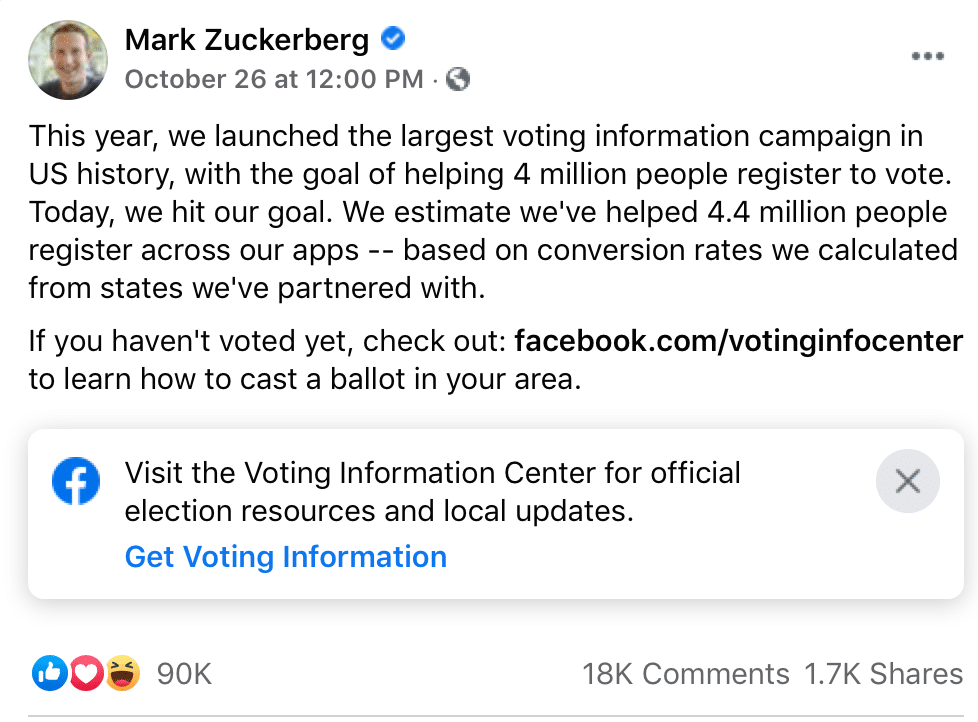 You’ve probably seen the voter registration prompts in your Facebook apps. They’ve produced an incredible result: With our help, an estimated 4.4 million people have registered to vote https://t.co/LtoKv0ymOB

Facebook was pushing so hard for voter registration, a lot of people were joking about it on Twitter.

A guy can't even be eaten by an animal without Facebook begging him his voter registration information. pic.twitter.com/J0TMlxBVqL

Others thought it was not enough, and that the company still needs to do a better job at stopping the spread of misinformation online.

I think it’s sort of disgusting how Facebook launches ads claiming they’ve been running the largest voter registration platform in 2020 yet they spread disinformation for years and are the reason we now we to vote Trump out in mass numbers.

Not everyone was a fan of Facebook’s Voting Information campaign, though. Several Republican-led secretaries of state were especially against it. In fact, in September the secretaries of state of Alabama, Idaho, Kentucky, Louisiana, Mississippi, and West Virginia, sent the tech company a strongly worded letter asking them to suspend the Voting Information Center. This was after Facebook reached out to secretaries of state across the country requesting information that the company could include in its website. In the letter, they claimed that only election officials are “legally and morally responsible to our citizens” and that Facebook has “no such accountability,” and therefore “the administration of elections is best left to the states.” The letter also called the Voting Information Center  “redundant”, and  “duplicative of what we, as chief election officials, have been doing for decades.” The republican secretaries of state also expressed concern that the voting center might foster “misinformation and confusion”.

It is no secret that the company has gotten into trouble in the past years with both political parties. Democrats have often criticized the company for not doing nearly enough to prevent the spread of false information and hate speech online, and as Facebook started doing more to stop misinformation (including even taking down a post by President Trump, in which he falsely claimed the coronavirus is less deadly than the seasonal flu), the Republicans have alleged (without compelling evidence) that they are the victims anti-conservative bias.

It is not surprising, therefore, that the letter was not the first time Republicans opposed Facebook’s Voting Information Center. In fact, not long after Facebook announced the campaign, some Trump officials claimed that the company would use ad-targeting to help register people who were specifically against the current President.

For instance, Samantha Zager, spokesperson for Trump’s campaign told Bloomberg News that, “with knowledge of every user’s political ideology, Facebook is officially in the business of political advocacy and their efforts to silence conservative voices should be seen as nothing less than an attempt to ultimately benefit Biden and the Democrat Party.”

These claims have been refuted by Facebook, who assured that there would be no ad-targeting in its voter registration campaign.

Facebook Spokesperson Kevin McAlister said, “we think every eligible person should have the information they need to register and vote,” but declined to comment on the letter.

A lot of people expressed concern about the Republicans resistance to the voting information campaign. Jesse Littlewood, Vice President for campaigns at Little Cause, said “It’s troubling to see those overseeing elections try to stop what appears to be a successful project to register voters.”

Republicans are so fundamentally dedicated to voter suppression that they see something as basic as voter registration drives as a problem. I bet these folks didn't send any letters to GOP-affiliated orgs encouraging voter registration. https://t.co/4wawvdRzms

In their letter to Zuckerberg, the six secretaries of states also mentioned that some of the information in the Voting Information Center was in fact, incorrect.

Brian Newby, a state election director from North Dakota wrote to the company saying that, “we don’t have time to keep fact-checking Facebook, especially when finding that errors and misinformation continue.” In his note he referenced the fact that “technically there is no deadline to request a ballot,” whereas Facebook’s voting website had said that potential voters had until November 2nd , which is the day by which a mail-in ballot has to be postmarked in that state.

Some signatories of the letter, however, changed their mind. For instance, in a recent press release Alabama Secretary of State John Merrill actually praised social media platforms for encouraging people to vote.

Despite the resistance from some Republican Secretaries of State, Facebook went on with the voting information center, in what Zuckerberg called “the single most powerful expression of democracy.”

What have you thought about all the voter registration prompts on Facebook?