A new photo has reignited the #FakeMelania conspiracy theory. The theory basically maintains that the First Lady has been replaced, or is sometimes replaced by a body double. People have proposed several possible reasons why Melania would need a double in the first place: like she refuses to participate in occasional events, or she doesn’t like Trump, or she’s dead or she’s left him.  People who believe the theory think it matches other narratives surrounding Melania,  as someone who is not interested or not willing to be a part of the administration, or as someone who hates her husband so much that she would get a stand in. If there’s any truth to those narratives or the “fake Melania” theory we cannot say, but we can say that the pictures look admittedly sketchy.

Some speculate she has left Trump, or doesn’t like going to these events, while others have proposed that the First Lady has had surgery : a face lift, breast enhancement, and that is why she looks different in certain pictures. All of this, of course, has been denied by the administration.

A lot of the speculation comes from perceived differences in physical appearance in certain pictures, or changes in behavior. Some believers of the theory also noted the similarity between Melania and a secret service agent that was seen accompanying her,  which they found suspicious. They also noted that it was weird that president trump referred out loud to her as “my wife, Melania, who happens to be right here”.

When did the theory start?

The theory really kicked off with a 2018 photo of FLOTUS exiting Air Force One in Brussels, though as early as 2017 people were speculating that Melania was being played by an impersonator. In October 2017 The Guardian columnist Marina Hyde tweeted “Absolutely convinced Melania is being played by a Melania impersonator these days. Theory: she left him weeks ago”.

This theory has appeared at least twice before, in 2018 and most famously in 2019, when Trump and the First Lady went to Alabama to survey the damage from the tornado that had struck the area. People were saying the chin was wrong, and that it was the” worst recasting since they recast Aunt Viv in Bel Air”

OK BUT SERIOUSLY. LOOK AT HOW DISTINCT THIS WOMANS CHIN IS. MELANIA’S CHIN IS MUCH WIDER. THIS WOMAN LOOKS LIKE MY ELEMTARY SCHOOL PRINCIPAL NOT MELANIA #FakeMelania pic.twitter.com/lMBZwsiJRE

The recasting of Melania is the worst I've seen since they recast Aunt Viv in Fresh Prince #fakemelania pic.twitter.com/HDIMi7FDAh

Trump tweeted at the time that “the Fake News photoshopped pictures of Melania, then propelled conspiracy theories that it’s actually not her by my side in Alabama and other places.” Trump provided no evidence for the photoshopped pictures. Although,  other pictures from Alabama did show clearly Melania wearing the same clothes from the pictures that so many people said did not look like her.  Melania’s spokeswoman also spoke out on behalf of flotus, calling the segment on The View “shameful” and “beyond petty.”

Why is it coming up again now?

The conspiracy theory has started circulating again after this photo: 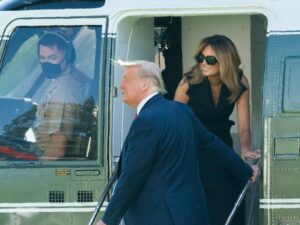 It seems like Melania is cheerfully accompanying her husband to the debate, and she’s smiling from the door of the helicopter, but many people don’t believe that is actually her.  Those who believe that that is a lookalike pictured in the photo,  have pointed out the differences between this supposed double and the actual Melania.

Namely, people believe FLOTUS’ teeth and lips look different in the picture. Someone also pointed out there are no smile wrinkles in this photo, whereas in other photos you can see that Melania has very defined smile wrinkles.

Where did her smile wrinkles go? Teeth are different. Lips are different. Smile is different shape. It is so obviously a #FakeMelania pic.twitter.com/xChVEthWG0

People REALLY zoomed in the picture and really studied it, pointing out the difference in the lines around her mouth, the curve of the smile, and the size of her teeth.

And others joked about which body double was the most convincing:

President Trump has fervently denied the rumors.  The president has said that the theory is “fake news” and claimed that the pictures of Melania that don’t quite look like her were simply photoshopped by “haters” .

What do you think? Real Melania or #FakeMelania?