Billie Eilish fans were quick to come to her defense after a body-shaming post goes viral on social media. The singer-songwriter is known for wearing baggy clothes but in these photos, she is wearing clothes that are more fitted to her body. The pictures posted brought on a lot of hate on social media of people claiming her figure wasn’t what they expected. 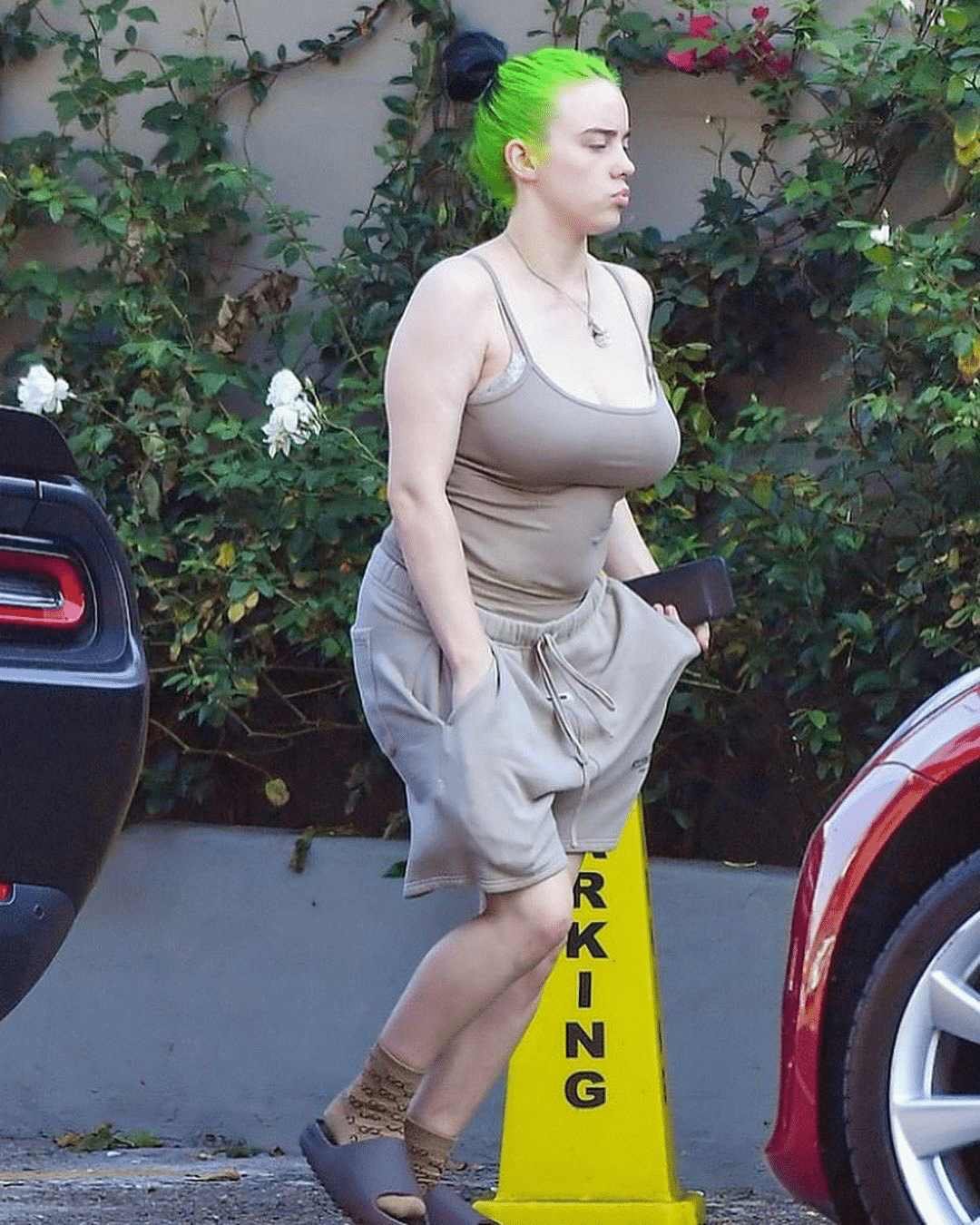 However, her dedicated fans and anti-body-shamers responded by drowning out the hate and spreading positivity. It’s 2020 the fact that people still feel the need to body-shame is beyond me…and apparently everyone else.

After posting the pictures on social media, body-shamers were expressing their disappointment with Billie Eilish’s appearance. In other words, her perfectly normal body wasn’t up to someone’s standard so they decided to trash her because of it. Since she is often wearing baggy clothes, it prevents people from being able to ridicule her body. She wasn’t wearing anything racy, but the clothes were tighter than her usual wardrobe choice so people began attacking her.

daily reminder that billie eilish is sexier than you pic.twitter.com/rw5pAjaFQK

The hate sparked conversations about body positivity. These raw photos are encouraging fans to feel confident about their own bodies. Many people point out that Billie Eilish is a teenager, so it’s entirely inappropriate to be sexualizing her body. Others share their thoughts by stating the fact that many women’s bodies look like hers. Emphasizing that her body is completely normal.

It's hot in LA Billie Eilish goes out in "Normal clothes" (a Tank and shorts) instead of her usual baggy clothes and gets body shamed..

Y'all should be ashamed of yourselves.

billie eilish went outside in clothes she felt comfortable in and received media press coverage everywhere and body shaming comments and people have the audacity to ask her why she wears baggy clothes all the time?? THAT is why.

dear media, didn’t think you knew, but billie eilish, an 18 year old, is one of the most successful artists in the world with insanely popular music. she’s a SINGER. she writes MUSIC. she’s NOT A MODEL. so don’t focus on her body, focus on her music.

I have the exact same body as Billie Eilish, boobs and everything. Some people don't understand that this is the body you get with big breasts, but also how much pain you go through having these things, the least you can do is stop body shaming us.

Leave Billie Eilish alone you weirdoes 💀 her body is perfectly normal & also none of your business https://t.co/9eGZG6KRwR

After receiving hate from the photos, the singer-songwriter shared a post on social media with a possible message for the haters.

do you really wanna go back in time?

This isn’t the first time she has spoken out against body shamers. On tour, she played a short film she created called Not My Responsibility, which was a monologue of her shutting down body-shamers. The video went viral with fans praising her for speaking out against the issue. Eilish posted the video back in May and it received over 26 million views.

She continues by talking about all the assumptions around what she wears and her body underneath. “Do my shoulders provoke you? Does my chest? My stomach? My hips? The body I was born with? Is it not what you wanted? If I wear what is comfortable, I am not a woman. If I shed the layers, I’m a slut. Though you’ve never seen my body, you still judge it. And judge me for it. Why?”

The Grammy award winner’s outfits have been a topic of conversation for quite some time. For a long time, people were unsure why Eilish would wear baggy clothes. It was later explained in a Calvin Klein ad that she wears baggy clothes because “no one can have an opinion on something they haven’t seen.”

Billie Eilish posted a video of her on her Instagram Story, walking past her awards and winking at the camera. Fans called the video a ‘power move’ against the haters. 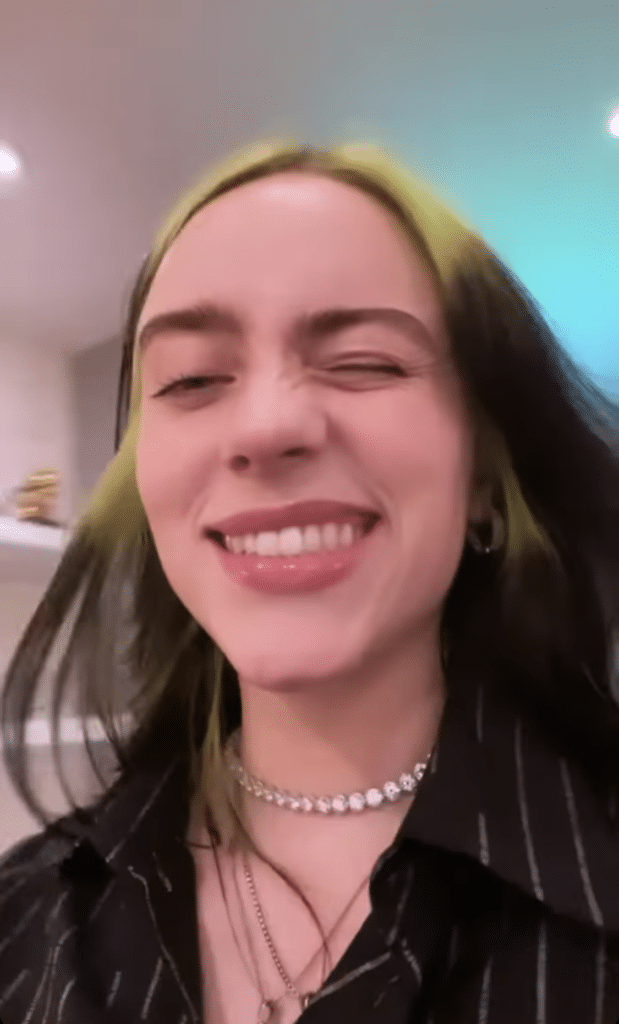 Eilish followed the video by sharing a TikTok talking about body-shaming. The caption of the video, “can we normalize real bodies???” perfectly sums up the hate that Billie Eilish is receiving from the pictures.

In case someone needed a reminder…. Instagram has warped a lot of y’all into thinking NORMAL bodies are abnormal. NO. Not every black girl has a shelf behind them. Stomach pudge is completely normal. Most boobs SAGGGG. And to all my mamas out there, it’s ok! You brought LIFE into this world sis 💕

The video talks about how Instagram and social media has people thinking that normal bodies aren’t normal. It was an inspiring message for people around the world to remember that not everything is what it seems just because it’s seen on social media.

She received backlash about the way her breasts look. People commented that it was a bit of a double standard that instead of defending Cardi B they judged her but quickly defended Billie Eilish and her appearance.

i find it interesting how some of yall were so quick to defend billie eilish but i saw some of the same ppl bashing cardi b’s boobs.

leave women and their bodies ALONE

Cardi B commented on the situation saying that it was her fault but she remains unbothered by the mishap. She posted a voice note on Twitter saying, “you know what? I’m not even gonna beat myself up about it. I’m just gonna eat my breakfast, right? I’m gonna eat my breakfast and then I’m gonna go to a party. Because I’m not even gonna think about it. I am not going to think about it, OK? No, I’m not. I won’t. It is what it is. S**t happened. Um, f**k it. It’s not even the first time. I mean, I used to f***in’ be a stripper, so whatever. Ay dios mio.”

Her dedicated fans didn’t want Cardi B to feel embarrassed or ashamed of her body so they created #boobsoutforcardi. People are posting pictures of themselves topless prove that all bodies are normal bodies. She has retweeted some of the tweets on her page. That’s definitely a new way to get your point across.

It seems that the media will never stop criticizing women for their bodies. Do you think these ladies handled their body-shamers effectively?