Although we are less than a week away from the spookiest day of the year, former One Direction member Liam Payne is making the spooky season a bit more jolly with the announcement of his new Christmas single, ‘Naughty List,’ which will be released this Friday, October 30 – the day before Halloween.

Merry Christmas all! ❄️ Too soon?…
I’m releasing a new single THIS FRIDAY to get you in the festive mood this year! It’s called #NaughtyList… And as an early present you can hear part of the track on TikTok NOW 🙌🏼
Pre-save now https://t.co/UEUzc55wcv pic.twitter.com/KaHzxMjITQ

Starting on Friday, fans can participate in ‘Naughty List Week’ where fans will be challenged to continually request ‘Naughty List’ to air on the radio as well as ask their favorite TikTokers and YouTubers to react to the song for a chance to win tickets to Payne’s virtual concert.

Welcome to the Naughty List Week.
It will take place this Friday. It’s a week dedicated to promote @LiamPayne’s new single Naughty List. Are you ready to make everything to promote Liam? #NAUGHTYLIST
👇👇👇👇👇 pic.twitter.com/JIZmy3V6kR

When Payne announced he was releasing new music, One Direction fans were ecstatic.

HE NEVER FAILS TO MAKE MY DAY =)
REPLY WITH NAUGHTY LIST
THANK YOU LIAM 😍💕 pic.twitter.com/N3Hbt3T2Zf

However, Payne is not releasing this holiday song alone as TikTok star Dixie D’amelio will be featured on this festive song.

Originally, the news was leaked after some fans noticed that Dixie D’amelio’s name was listed under the song on Apple Music. 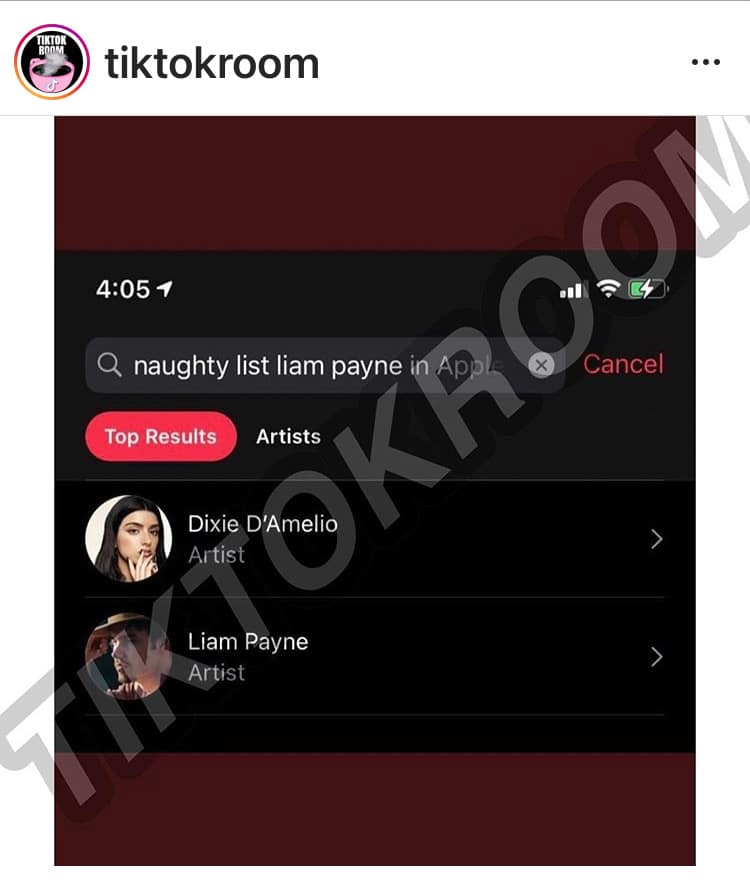 After fans went into a frenzy over the rumors, D’amelio confirmed them by duetting Payne on TikTok.

Fans Are Not Excited For This Collab

But many are upset that Payne decided to collaborate with a TikToker rather than a more prominent pop star.

yea this angers me. she does absolutely nothing and gets everything handed to her. like this is THE king liam payne. just no

okay i don’t dislike dixie as a person, but she has one single and is mainly a tik tok person and like influencer- how in the world is she getting an opportunity to work with LIAM PAYNE??? HE IS/WAS IN THE BIGGEST BOY BAND IN THE WORLD??? i just wanna hear liam no one else-

After a preview of the song was released on TikTok, thousands began to use the sound, but mostly fans were using the song to express their negative opinions on Payne collaborating with D’amelio.

thank you for coming to my ted talk

This caused people to start comparing Liam Payne to Jason Derulo. You might remember that Derulo rescued his relevancy by associating himself with young TikTokers – which people now think Payne is trying to do too.

@LiamPayne can you not be the next jason derulo please

would have never thought that liam payne would be the next jason derulo pic.twitter.com/qCrWOtEfSi

Shortly after these comparisons were made, Derulo posted a snippet of his ‘Drop the Mic’ rap battle with Payne on TikTok, but it is unclear if it had anything to do with Payne’s recent announcement.

However, the root of many fans’ frustrations is that they hoped Payne would reunite with his former bandmates, not a TikToker who is just starting to dip her toes into the music industry.

The fact tha dixie is releasing a song with the superstar Liam freaking Payne is killing me, he could collab with Niall, Louis, Zayn and Harry 🤚🏻🥱 #OneDirection #LiamPayne

Others are also commenting on how they think it will be a bit awkward watching a One Direction star and a TikToker sing a romantic and “naughty” song together.

istg, if i see someone shipping liam and dixie i’m gonna throw hands

D’amelio may have her haters, but there are some who are coming to D’amelio’s defense as they claim the song sounds good, and it is still their beloved Liam Payne.

why r ppl so upset? they sound good together just say you hate to see her succeed and work with someone she's looked up to for years

I DON‘T CARE IF DIXIE IS IN IT AS LONG AS LIAM IS HAPPY WITH THE SONG. NAUGHTY LIST IS COMIIIIIINNGGG pic.twitter.com/evni0rkfNW

ok but if you purposely don't stream naughty list bc of this, i'm throwing hands. it's still liam

Also, many are happy for D’amelio as in the past she has made clear that she is a huge One Direction fan, and this is a dream opportunity for a superfan.

i’ve seen a couple people upset over liam making a song w/ dixie. and honestly, i’m not 100% sure how i feel either, but they seem super excited about it. so, i’m happy for them. especially dixie, as i’ve seen that she’s a fan of the boys. i’m sure this is huge for her <3 ily all pic.twitter.com/kiAq18JzvU

honestly i gotta say,, dixie won at life. she’s been a fan of one direction since they first started as a band and now she gets to collaborate with one of the members of one direction

However this is not the first time D’amelio collaborated with a famous artist as Lil Mosey and Blackbear hopped onto the remix of her song ‘Be Happy’ last month – but most watched the music video to see her kiss Noah Beck.

Liam Is Having a Halloween Event

As the popularity of TikTok has grown, Payne has been trying to connect with his fans through being active on TikTok. He has been collaborating with popular TikTokers such as makeup artist Abby Roberts as she helped Payne find his Halloween look.

Though Payne is releasing a Christmas song, he has not forgotten about Halloween! He is hosting a virtual Halloween concert on October 31 – the day after ‘Naughty List’ is released.

Act 3 of #TheLPShow is here! This Halloween Special is bringing all sorts of surprises and scares 🎃🕸👻 Tickets are ON SALE NOW, link in bio!

This is not the first One Direction news of the week! Harry Styles released the music video to his song ‘Golden’ on Monday.

Although this collaboration is unexpected, both artists are benefiting from this song, despite what many may think. Payne is opening the doors for D’amelio into the mainstream music world, and D’amelio is exposing Payne to a new and younger fan base.

Dixie D’amelio is truly living the dream as a year ago she was an average high school teenager in Connecticut, but today she is making hits with Liam Payne. She probably never expected for her One Direction dream to come true.

What are your thoughts on Payne’s new song? Are you upset Payne is collaborating with Dixie D’amelio? What are your predictions for the music video?