As the 2020 presidential election is going on, Gap tweeted a photo of a unity hoodie but deletes it after all the backlash received. It was a half red and half blue zip up hoodie with GAP right across it. The purpose of the hoodie was to represent both the democratic and republican parties and unite them both. Gap learned the hard way, you can’t put a democrat and a republican together. This happens to be a screenshot of the tweet that’s captioned “The one thing we know, is that together, we can move forward,” adding and blue heart emoji and a red heart emoji. As for the OCDers, they noticed that the halves of the “A” weren’t aligned. That also drove people crazy. 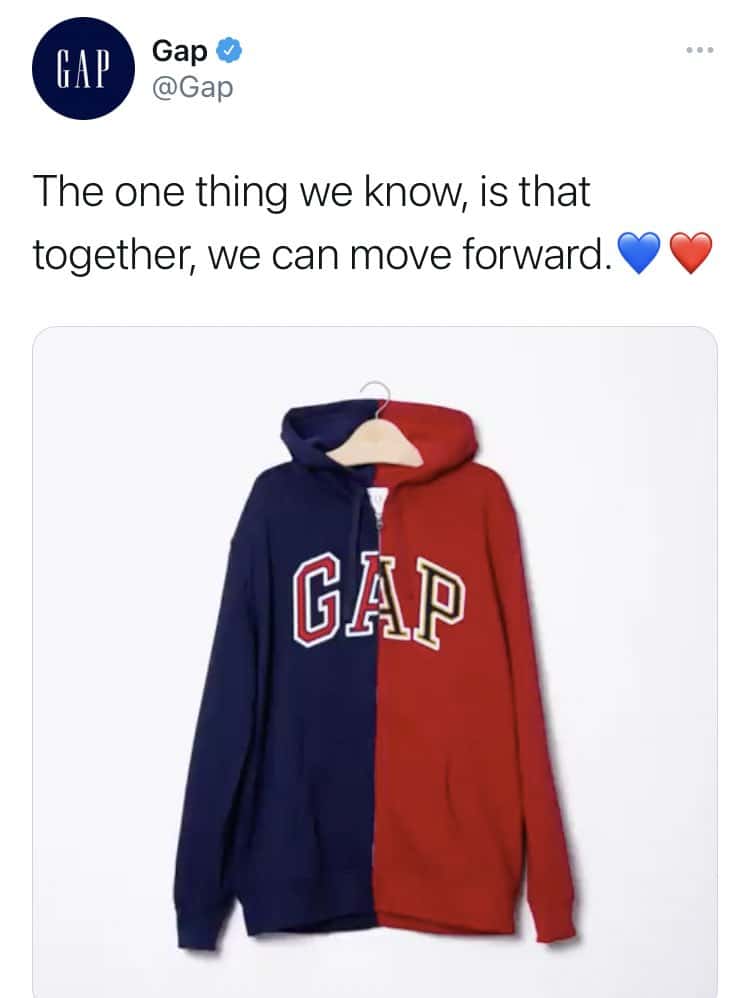 After the tweet was deleted, one of Gap’s spokesperson clarified that the hoodie was not an actual product for sale. “The intention of its social media post featuring a red and blue hoodie was to show the power of unity,” tweeted New York Times reporter, Sapna Maheshwari.

Gap has now deleted this tweet. A spokesperson told me that it was not a real hoodie for sale. pic.twitter.com/CDV18Zaz48

Soon after, Chrissy Teigen jokingly reply’s to the tweet, “yay we can just walk sideways depending on the city we’re in.”

yay we can just walk sideways depending on the city we’re in https://t.co/W8qyxfb05s

Although Gap thought their heart was in the right place, it was too soon to tweet about unity. Especially as a divided nation waits patiently for the Presidential election results. The good thing is that Gap then realized it was too soon. “It was just too soon for this message. We remain optimistic that our country will come together to drive positive change for all,” Gap told New York Times.

People sure had many things to say, as if they already don’t have the election to worry about. Many Twitter users commented “Read the room,” adding a gif to it. In addition to that Twitter users thought the hoodie was ugly.

On the other hand this post two parties, those who were against the post and those who defended it. One user commented, “Can somebody explain to me why this is supposed to be so terrible? I really don’t get it. I thought unity was our goal.”

Another user commented “It is sad that an expression of American unity is met with backlash. What has become of patriotism and American ideals?”

Right now the whole United States is focusing on getting the results in. Pennsylvania is still counting its ballots which holds 20 electoral votes. Even if Biden does not win the majority in Pennsylvania, if he can take Arizona and Nevada and keep the lead in Wisconsin and Michigan he will become the new President of the U.S. elect.

thanks @gap i’m gonna wear this on the battlefield in the civil war to symbolize how we should all be getting along better pic.twitter.com/vWUbo8aSzb

Now is really not the time @gap for this corporate Karen bullshit. A coup attempt is not a fucking marketing opportunity to push product. pic.twitter.com/w2KTHu3e97

This 2020 election is one for the books. Records have been broken such as the amount of mail in ballots that were turned in and an overall voter turn out in this election. 159.8 million votes have been projected for this election.

President Trump is leading in Georgia with Biden coming in a close second. He is demanding a recount in Wisconsin, a state that Biden flipped. Trump is also suing Michigan and Pennsylvania to stop ballot counting.

The two states that are under close observation at the moment are Arizona and Nevada. These two swing states have the power to declare Biden the new President of the U.S. or to give Trump a fighting chance to win re-election. About 600,000 votes are still to be counted in Arizona with results being released throughout the night that can let voters know what to expect from this state.

This has been a long journey with the president not being chosen on election night. Whatever the results at the end of this election lets hope to find unity just like Gap wanted us to.