A teenager in Nevada has sparked some major outrage after creating a George Floyd-themed ‘promposal’. The picture of the dance proposal circulated on social media as many were disgusted by it. 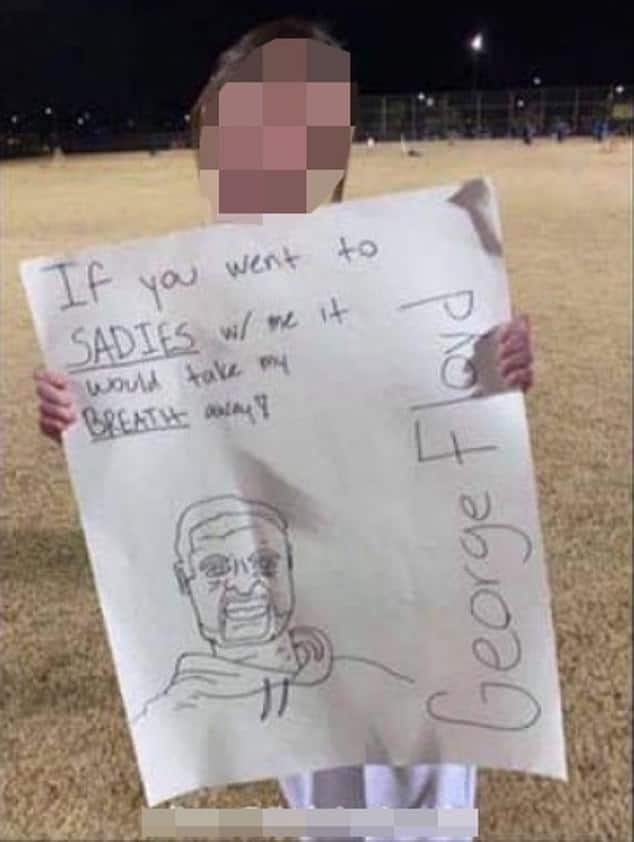 The poster from the promposal said, “If you went to SADIES w/ me it would take my BREATH away.” The photo is of a female student holding up the poster with a drawing of George Floyd in a sports field.

According to the Las Vegas Review-Journal, Foothill High School in Nevada hasn’t held any dances this school year due to the pandemic. Clark County School District school officials were made aware of the situation and assured people that they will take action.

Foothill High School in Henderson where the promposal took place, said that an investigation has been launched. Parents at the high school received a letter saying that the school won’t tolerate racially insensitive behavior. The school added a message on their website as well.

“Foothill and CCSD will not tolerate racially insensitive behaviors that contradict an inclusive community and impact the school culture of our students.” The school continued to reiterate the situation is being handled, “As you are aware, Foothill High School and CCSD cannot comment on individual student matters or discipline, we assure you the issue is being addressed.”

The picture of the dance proposal was shared all over social media where people on Facebook and Twitter showed their utter disgust with the poster. People couldn’t believe that someone thought that the poster was a good idea for a proposal when you’re quite literally making a joke about someone’s death.

“Let them know this is completely unacceptable and disciplinary action should be taken,” one user wrote on Facebook.

Another user on Instagram commented, “The white privilege in this picture is LOUD, girl c’mon.”

Some users have claimed to have known the girl’s identity and asked people to contact her school to complain about the promposal that took place.

What is this bruhhh 😐😒… pic.twitter.com/6k8F4oeuIV

This user compared the situation to a similar one that happened in Los Angeles earlier this month.

I think this is the picture a bunch of LA cops got suspended for liking or reposting. It's terrible. Regardless of what anyone thinks of that situation to make light of someone's death is disgusting and unfathomable. I hope they all get fired.

She really woke up and chose violence… against her chances of getting into college 🤦‍♂️ pic.twitter.com/GAsoCmyihn

Some people agreed that although it was horrible to do that, the girl is young and shouldn’t have the rest of her life ruined from a mistake she made in high school.

Honestly this is just a dumb mistake made by a high schooler, does she really need her life ruined over this…everybody saying high schoolers are grown and should know better obviously do not remember high school

This user feels like the response she is getting is not how the situation should be handled.

It was wrong of her but she is literally a high school kid. Better to educate than to harass and bully a child with threats to her life and trying to destroy her future prospects.

She really thought this was a good idea😒 pic.twitter.com/cCBKWWCG99

In May 2020, George Floyd was seen on video begging for his life while a white Minneapolis officer Derek Chauvin knelt on his neck for more than 8 minutes. Floyd can be heard gasping for air because he couldn’t breathe.

Derek Chauvin is now charged with murder. George Floyd and Breonna Taylor’s death ignited Black Lives Matter protests across the country and the world. Millions of people came out to protest against police brutality and racial injustice.

The co-founder of the No Racism in Schools #1865 campaign spoke about the incident in an interview with KTNV. Jshauntae Marshall said, “We were outraged, you know, I felt very, I was angry and I was saddened and, of course, because the parents are sending information over and we’re getting volunteers to help to say hey, alert, alert, this is happening, right? Is a really difficult pill to swallow we have to digest this every time something like this happens.”

She expressed that ignorance is not an excuse for racism. She explained that they have zero tolerance for racism and she was not only angry about the incident but saddened as well.

“We have to digest it every time something like this happens,” Marshall said. “It’s a really difficult pill to swallow.” The more the photo circulated on social media the more people agreed that it was something very shocking to see.

Jshauntae Marshall pointed out some resources that the No Racism in Schools campaign has to offer including various guidelines to help navigate steps going forward with situations like this. She explained that education comes from both the school and the community.

“We have a turnaround plan that has been started, and we want to make sure that she understands—as well as everyone else in the district—that it is a no-tolerance zone, period.”

This incident follows shortly after another that happened earlier this month in Los Angeles. Members of the Los Angeles police department allegedly had a picture going around for Valentine’s Day that had the caption, “You take my breath away.”

When people found out about the image LAPD launched an internal investigation into the matter. “People will feel my wrath,” Chief Michael Moore stated in response to if the rumors about the image are confirmed. Moore stressed the importance of their zero-tolerance policy for racism.

Situations like these are frustrating and sad. Some people excuse children from this behavior but adults seem to be in the same situation. Do you think schools can do more to prevent situations like this?