A man of enchantment
By Stephanie Makri

Harry Styles opened the Grammys on Sunday, March 14th, with a thrilling performance of “Watermelon Sugar.” Blood was running high throughout as Styles showcased why he’s so golden! The night reached a peak for the artist when he won Best Pop Solo Performance, his first ever award with the Recording Academy. His acceptance speech was short and sweet, taking the time to appreciate his team who helped him along the way.

“This was the first song we wrote after my first album came out, during a day off in Nashville. I feel very grateful to be here, thank you.” He continued by showing gratitude to his fellow nominees which he beat out including Justin Bieber, Dua Lipa, Taylor Swift, Billie Eilish, and Doja Cat.

“All of these songs are f–kin’ massive so thank you so much,” the former One Direction member stated. “I feel very honored to be among all of you.” 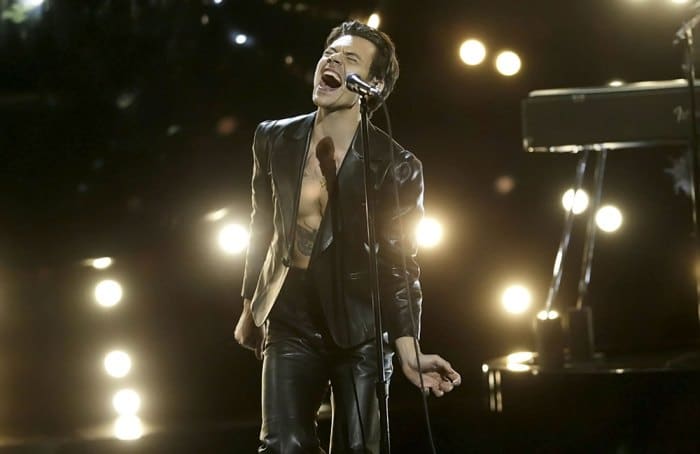 In an interview with Variety in December 2020, just as the nominations were announced, Styles opened up about the importance of recognition, but simultaneously humbleness.

“It’s always nice to know that people like what you’re doing, but ultimately — and especially working in a subjective field — I don’t put too much weight on that stuff. I think it’s important when making any kind of art to remove the ego from it. It’s about the work that you do when you’re not expecting any applause.”

The 27 year old was nominated for 3 categories this year including Best Pop Vocal Album, Best Pop Solo Performance and Best Music Video, keeping stakes high for a win. He kicked off the spectacular evening with a jazzy edition of his hit “Watermelon Sugar,” the song which secured his spot on the list of winners. Styles in an all black, leather Gucci suit with a green scarf caused frenzy across the Internet as he appeared shirtless underneath, exposing his chest tattoos and groovy moves throughout the performance.

Journey As A Solo Artist

Styles launched his solo career after One Direction announced their hiatus back in 2016. “Sign of the Times” was his first single which dropped a year later, giving fans a taste of what was to follow. Inspired by the mellow gold of the 1970’s in his debut album released in 2017, Harry Styles continued along the same lines in his second album Fine Line released December 2019. The gateway to his solo career was introduced through his first album, Harry Styles in which he transitioned from One Direction’s pop/pop rock style to a more complex sound. The transition was smooth with the main elements still present, though having a stronger rock tone throughout. Fine Line however rocketed Styles’ career to the skies as it was the album which differentiated him as an artist, giving him the joy of earning his first Grammy award.

During his “Watermelon Sugar” performance, fans all over the globe went into a frenzy, admiring their favorite artist thrive on the Grammys stage. Styles’ sexy moves along with his sweet-sounding vocals led fans to ecstasy as they watched the singer with awe. Twitter drowned in comments with users expressing their enthusiasm towards the singer’s success and heart-thumping performance.

i honestly think it’s disgusting that my school is not giving me a mental health day tomorrow after harry styles just performed shirtless in leather on the grammys.

taylor swift is so happy for harry styles. i love it #GRAMMYs pic.twitter.com/lk17NTphsU

How it started: How it’s going: pic.twitter.com/BWfrRGgXcb

smile Harold, you deserve this and much more. be proud of yourself because you got it.✨#GRAMMYs #HarryStyles #ProudOfHarry pic.twitter.com/DAPFIJU4pg

after all this time, my heart is swelling with joy and pride for everything he has achieved. we love you so much @Harry_Styles, always had x pic.twitter.com/x9LNIpQsWa

A man of great charisma and charm; Harry Styles has set a solid ground for his career path exposing a passionate yet vulnerable self, something the young generation can admire.