On July, 31, Save the Children protests in numerous parts of the country went underway in support of the movement to end human sex trafficking. While human trafficking has been a major issue in the U.S for decades, the movement has increased in support as more people have started to speak up about this injustice happening to millions of people, with many victims being children.

The year 2020 has been full of advocating for human rights on all fronts. Celebrities, media sites, and people from all walks of life have come together to vocalize that many changes must be made within society. However, as talk about the human trafficking crisis has gained traction, there’s been an obvious and deafening silence from Hollywood and mainstream media regarding the movement.

While Hollywood and the media continue to ignore the elephant in the room, word about the Save the Children movement has spread via social media sites such as TikTok and Twitter. On the social media sites, users have filmed footage from the protests happening in Phoenix, Arizona, Salt Lake City, Utah, and right in Hollywood’s neighborhood of Los Angeles, California.

This user tweeted a picture of the Los Angeles protest.

Another user tweeted a TikTok of footage from the Phoenix protest.

We have #savethechildren protests in SoCal, Phoenix, Salt Lake City.. and it's still not trending eh?? Wonder why..🤔https://t.co/Mw453zm1I0

While some users on TikTok have used the movement to compare political parties and candidates, many others are urging people to remember that human trafficking is a human rights issue. 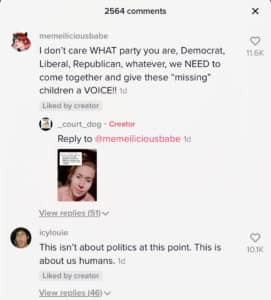 The protests come in the wake of more information revealed about Jeffrey Epstein and Ghislaine Maxwell. In early June, Jeffrey Epstein’s Little Black Book that logged the names of the rich and famous who came and stayed on Epstein’s island Little St. James in the U.S. Virgin Islands was made public. It is thought that Little St. James was the epicenter for Epstein’s sex trafficking scheme of underage girls and boys. In the beginning of July, Maxwell was arrested, and just earlier this week court documents were released from the settled defamation lawsuit filed by an alleged victim of Epstein’s, Virginia Roberts Giuffre, which lists the alleged involvement of big names such as former President Bill Clinton and Royal Family member Prince Andrew.

Typically, Hollywood and mainstream media are quick to fight against and broadcast injustices such as racism and sexism, but why are they so hesitant to speak out about the human trafficking crisis happening now? Let us know in the comments below and follow What’s Trending for more!