A woman in Toronto who refused to wear a mask is drawing a ton of attention. She was forced out of the hospital, rightfully so, and drew a lot of local officials and celebs to speak out about her.

The woman named Letitia Montana seemed like she obviously had to record the incident it seems like.

She posted on Twitter, Went to the Emergency Dept. at St Joseph’s Hospital in Toronto for a suspected broken finger. I was asked to wear a mask, which I refused to do. As a result, hospital staff asked me to leave and immediately called 3 security guard to escort me out.

Now the comments section is obviously pretty great because they told her what’s good. But she actually came in on July 4th for her son’s broken finger.

Went into the Emergency Dept. at St Joseph’s Hospital in #Toronto for a suspected broken finger. I was asked to wear a mask, which I refused to do. As a result, hospital staff asked me to leave and immediately called 3 security guards to escort me out. #filmyourhospital pic.twitter.com/7KlDa11udk

City or Toronto chief spokesperson Brad Ross warned Montana she was going to become a verb. He said “ You’re doing social media all wrong, Letitia. Don’t make your name a verb. Put the camera away and don a mask inside public places, *especially* hospitals. Doing so protects others – you know, your fellow humans.”

Even Canadian Councillor Michael Ford, who was also hospitalized after contracting COVID-19 last month called her out saying “Translation- “I don’t care about you or anyone else but you better care about me”

But Montana said she stood by her decision not to wear a mask in the emergency room, which we do not know why.

On social media, Montana identifies as a “truther.” which is defined as a person who believes a conspiracy is blocking the public from learning about the truth about an important subject. She also recently attended a protest in Ottawa demanding an end to lockdown measure and removal of the Liberals from power. She even posted “I will not endanger my own life of that of my son to comply to the demands of some politicians.” 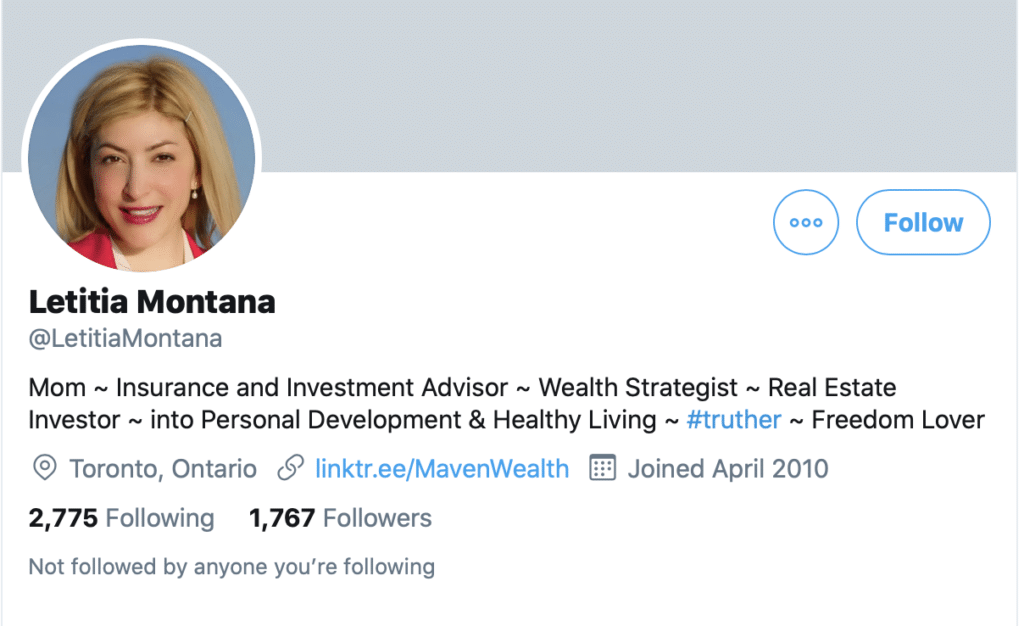 Letitia has also taken the time to post about how ineffective face masks are on her Twitter timeline.

People on Twitter said things like “GOOD! The hospital is being responsible.” Another said “ Hospital/frontline workers wears mask on their 12hrs+ & you can’t for your visit? Just wear the mask, it’s the safety for the staff and patients in that hospital. Try getting away with not wearing a mask at literally any hospital. They will not allow it. #wearyourmask. One other person poked fun saying “Your bio says that you’re into personal development and “healthy living.”