In response to the decision of releasing the news now, rather than any other time, the rapper wrote, “I kept waiting for the right time to say something, but it feels like the more time passes, the more I realize I’m always going to feel anxious to share news that is giant with the world. ” This announcement is indeed a giant one… at least to some of us. Someone even tweeted, “iggy azalea was pregnant and we all didn’t know. ” 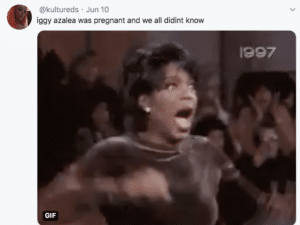 The tweet above gained 5000 likes and almost 700 retweets, but the people who retweeted claimed that they saw this coming. One wrote, “we knew, we just didn’t care.” 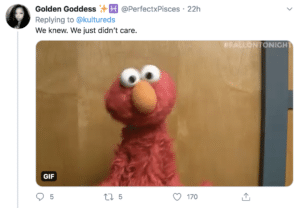 At this time, Iggy has not yet confirmed who the father is, though many believe that the baby belongs to Iggy and rapper, Playboi Carti, whose real name is Jordan Terrell Carter. The rappers started dating in 2018. Playboi Carti told Fader in a 2019 interview, “Once I started talking to her, I just cut off everybody. I support everything she does.” At the time, the couple was said to have moved in together in Atlanta. Despite the ring that appears in Iggy’s pictures, the couple has never confirmed anything about their engagement.

Iggy indicated on Instagram, “I want to keep his [the baby’s] life private, but wanted to make it clear he is not a secret & I love him beyond words.” 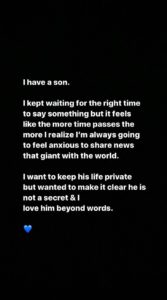 We respect Iggy’s personal choice and privacy. Big congratulations to Iggy Azalea’s “Bounce” into her “Fancy” motherhood, an event that might really “Change Your Life”.  Are you surprised by Iggy’s announcement? Comment down below!

Recently, Lizzo calls out body shamers and racists amid #BlackLivesMatter. Check out this article to learn more:

Lizzo Calls Out Body Shamers and Racists Amid #BlackLivesMatter