In Strange Woods – the new docu-musical fiction podcast by Lauren Shippen’s Atypical Artists – has quickly become one of the most listened to podcasts in America. Listed by The New York Times as one of the “Best Winter Podcasts”, the audio drama reached #1 on Apple’s fiction podcast charts. The setup of In Strange Woods, fictional true-crime investigation takes place in a tense and emotional narrative.

It’s like Hadestown & 21 Chump Street had a baby… and then that baby wandered off into the woods. 👶🏻🌲 Great tunes, well-drawn characters, fantastic sound design and mixing. Just top tier stuff.

In a small Minnesota town, a boy named Jacob gets lost in the woods, vanishes, and is tragically found dead. His loss leaves an impact and shatters the town the town, and his younger sister Peregrine (Lily Mae-Harrington) finds herself drawn to the local survivalist, Howl. Voiced by Patrick Page, Howl is a Tom Waits’ian ideal who looks like an archetypal Unsub but is bent double under tragedy of his own.

In an effort to understand her loss, and to punch mortality in the face, Peregrine persuades him to teach her survival skills. Over the following months, her friends get caught up in the same, curious orbit.

This is such a wonderful thorough review of the musical/serial podcast I’ve been trying to tell y’all about called @instrangewoods – I think Shawne explains it better than I could. Thank you 🙏 https://t.co/jTatZT3T9r

The cast, packed with a range of identities including broadway stars and audio fiction favorites, manages to thread the needle of true crime and the musical suspension of disbelief, making for a unique and compelling experience.

When they combine as one, the group find something bigger than the town, but for Peregrine that is not enough.  The point is The Final, when Howl will drive them into the woods and leave them alone with no idea where they are, minimal resources and one task: make it home alive.

A couple of outlets had things to say like: 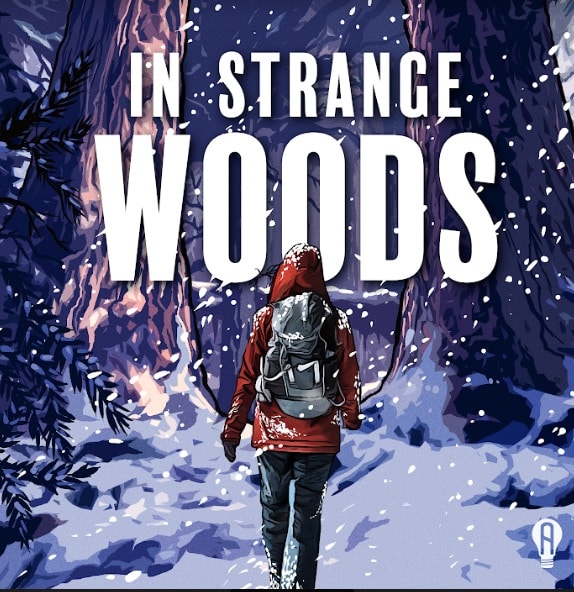 “Courage is one of the defining traits of the show…it’s remarkable…In Strange Woods is a compelling, tragic, funny musical audio drama, unlike anything else I’ve heard this year.” – The Full Lid

Not sure what I'm happiest about with episode 2 of @instrangewoods

The continuation of the story😁😬😲, the new song "Shatter" 🎶😍, hearing the voices of @BriggonSnow and @laurenshippen🥰, or Irene and Declan O'Connor😂❤

oh holy heck, @instrangewoods is so well-made and so compelling. i am deeply on the hook for the next episode!!

The music throughout the entire show gives a fun ‘musical’ sense of stage when listening. Much of the soundtrack leans into what a podcast can really do for a listener from dynamic sound effects to even making it feel like someone is right behind you at times to keep you on the edge of your seat.

anyway here's a comic page per song in the first episode pic.twitter.com/xkyTWTlsDA

@instrangewoods is crazy good?!?!? I love how different the show is and the production is amazing!!! Can’t get over how different and fresh the whole show is ❤️❤️❤️

Significant parts of the narrator Brett’s dialogue make you feel as if it is something close to poetry, and gives you an emotional focus and depth to the narrative.

Hey there fellow #podcast fans: if you are looking for a hell of a well-made musical pod, check out @instrangewoods as soon as possible. Mysteries layering on mysteries, teenagers caught between needing to learn survival techniques and the terrible rumors about their mentor,

Every Monday I listen to the podcast @instrangewoods and then think about nothing else for the rest of the week.

I know I repeat myself but @instrangewoods is SO good! When I listened to Ep1 I thought I had a pretty good idea about where the story would go but it takes turns with every episode especially Ep4 now! Now excuse me while I keep skipping back to listen to In the Dark with Him ;;

WHAAAT! I just started listening to get caught up and had no idea QUEEN @DLChamplin of Crazy Ex Girlfriend and icon @MrKristianBruun of Orphan Black were voice actors in it and now I’m EVEN MORE EXCITED TO LISTEN pic.twitter.com/qVcCkFXAwX

The music is stunning. Truly just gorgeous, lyrically rich songs that weave seamlessly in and out of the plot – adding depth and dimension, light and layers; making emotional connections in the way music so efficiently and effectively does. I cannot WAIT for the cast album!! 😍

If you have your doubts about a musical podcast, listen to In Strange Woods for yourself and be happily convinced otherwise.