Gabi DeMartino, best known for her YouTube vlogs and looking like Ariana Grande, faced backlash after posting a childhood home video to her exclusive OnlyFans page containing underage nudity. Her followers and professional sex workers were outraged. OnlyFans has since deactivated her account for violating the site’s guidelines. 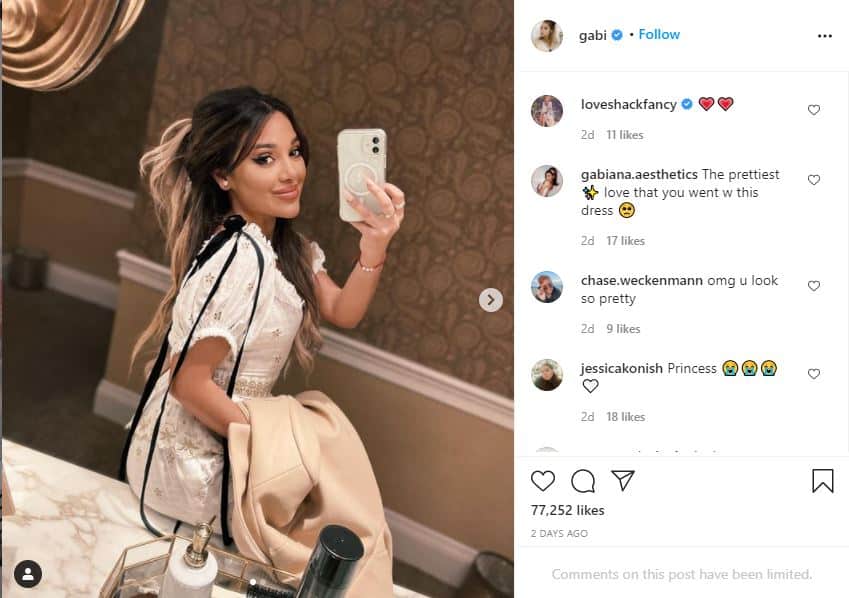 Gabi DeMartino, best known for her YouTube channel with 3.24 million subscribers, and being chummy with pop star Ariana Grande, has recently had her OnlyFans account deactivated. The 25 year old vlogger claims that she uses her OnlyFans account as a ‘finsta.’ Finstas are Gen Z’s version of a diary, meant only for close friends and for posting things that are normally not meant for the public (i.e, horrible selfies, embarrassing stories about your day, angry rants, etc.). With this in mind, DeMartino claims she didn’t think much of it when she privately messaged a 35 second childhood home video to her OnlyFan subscribers.

The video showed a young DeMartino lifting her dress to show herself naked. She captioned the message, “won’t put my panties on,” and charged $3 to view the contents.

The surprise message did not go over well to say the least. Critics were offended by DeMartino, accusing her of selling underage sexual content to unsuspecting subscribers.

I have absolutely NO words right now. Gabi Demartino really uploaded a video of herself as a child lifting up her dress to her Only Fans account. @OnlyFans this content is disturbing, inappropriate and illegal. Please do something.

Yeah people aren’t talking about this Gabi Demartino situation enough for me. Sis posted CP on her onlyfans!!!!! That’s illegal! People using the excuse “well it’s her as a child” okay and??? Do you see me posting the pictures my family took of me in the bathtub???

DeMartino originally defended the clip. She told Insider that, “drama channels are trying to make something out of a childhood video of me.”

But DeMartino quickly realized how her video upset many and she apologized. “I’m sorry I didn’t think that one through. Period.”

a childhood video of me on the phone sayin "Nani says put your panties back on" and jumping up and down laughing. I'm sorry I didn't think that one through. period. a home-video i love to share w my friends & i use my OF as a "finsta" page where i share stuff as i would w friends https://t.co/yEgFCPs9zg

In this day and age, the backlash on Twitter can be very harsh. She continued to say, “I am sorry that this wasn’t thought out completely I apologize. The video is down now I am sorry again if this came out wrong.”

the video was a goofy throwback family moment that I wanted to share with my personal onlyfans fancy babies. I am sorry that this wasn’t thought out completely I apologize. The video is down now I am sorry again if this came out wrong.

But critics aren’t accepting of her apology. They continue to accuse the influencer saying that the whole video message seemed very purposeful in intent.

ANYONE who reads the caption without knowing the video content, especially on OnlyFans, would assume it was 100% sexual content. You knew what you were doing and it’s vile.

And sex workers who use the platform professionally are outraged. Alana Evans, a professional in the adult entertainment industry, explains how severe the consequences would be for someone in her industry. “If someone in the adult industry did this, we’d be in jail,” she tweets.

You are disgusting! If someone in the adult industry did this, we'd be in jail. I'm so glad ONLYFANS deleted you!

Sheena Rose, another professional in the adult entertainment industry, also agreed that people do not understand what is “off limits” in their industry.

The people in the comments saying "You're so weird its just this & that" shows that they have absolutely no idea about our industry, the stigma, and content that is OFF LIMITS! I don't think it's ok to even post your child self/relatives on your NSFW twitter let alone sell it

But some of DeMartino’s fans are loyal and have come to her defense.

Leave Gabi alone she can post whatever she wants! It’s literally just a home video from when she was younger. I don’t see why you all get so offended so easily. Anyways she has my full support like always

Having a strikingly similar appearance to pop singer Ariana Grande, the two have become acquaintances. DeMartino even made a cameo appearance in Grande’s “Thank u, next” music video. But with the OnlyFans scandal, Ariana fans are asking the singer to distance herself from the influencer.

Since the explosion on Twitter from Gabi DeMartino’s OnlyFans video, the influencer said that she took the video down, but it also looks like OnlyFans has deactivated her account for violating their content policies.

in case anyone is curious, Only Fans has deactivated Gabi Demartino’s account and rightfully so. pic.twitter.com/F5X5UAEkou

OnlyFans suggested that they had a role in the removal of DeMartino’s page. “The account in question is deactivated for violation of OnlyFans’ Terms of Service,” they stated to Insider.

But not only has OnlyFans deactivated DeMartino’s account, but some of her critics have reported her to her local police for selling her naked home video to unsuspecting subscribers.  Federal guidance states that “a picture of a  naked child may constitute illegal child pornography if it is sufficiently sexually suggestive.”

This is disgusting I've also reported to her local police department.

In a now deleted Tweet, DeMartino claimed the video was just her “trolling,” also known as purposely provoking someone online. DeMartino also explicitly stated that her OnlyFans page was not a sexual page. Despite DeMartino’s statement, some of her previous OnlyFans posts are objectively sexually provocative, including a few with her boyfriend, as well as topless photos.

What was meant to be a funny troll video on OnlyFans quickly escalated, offending those in the professional adult entertainment industry as well as those who have been traumatized or negatively affected as a result of child pornography. This has been the latest OnlyFans “misuse” in a series of celebrities and influencers, upsetting sex workers who rely on the platform for their livelihood.