From dance to comedy videos, millions of eyes are glued to TikTok daily as this app fills our boredom with the content we enjoy. However, the people who make the videos we love have to face a different side of TikTok – hate.

No matter your content or celebrity status, if you gain clout on TikTok, you are going to receive hate. Even the biggest creators such as Charli D’amelio and Addison Rae experience TikTok’s toxicity, and it seems that no one is immune to these trolls – not even Taio Cruz.

If you are unfamiliar with Taio Cruz, he is the person who made every 2010s party a blast as we “threw our hands up in the air” and “said ayeoh” to his song ‘Dynamite.’ But as the hype of his songs ‘Dynamite’ and ‘Break Your Heart’ faded, so did Cruz.

However, artists who peaked in the 2010s such as Jason Derulo are becoming more relevant through utilizing TikTok as their new platform. For Derulo, this worked very well as he amassed over 35 million followers and created a #1 song by using a catchy tune from a TikTok trend.

Following in Derulo’s footsteps, Taio Cruz thought he could receive the same positive results by joining TikTok to excite fans for a possible ‘Dynamite 2.’

HELP TAIO CRUZ (the singer of dynamite from 2010) POSTED THIS ON TIKTOK pic.twitter.com/9VCedGJVDy

But he forgot to account for the animosity that comes with TikTok fame. On his videos, many users expressed their negative opinions towards his content and claimed that he is irrelevant.

Just wanted to let you guys know that Taio Cruz and I have beef pic.twitter.com/llNqHZBgDv 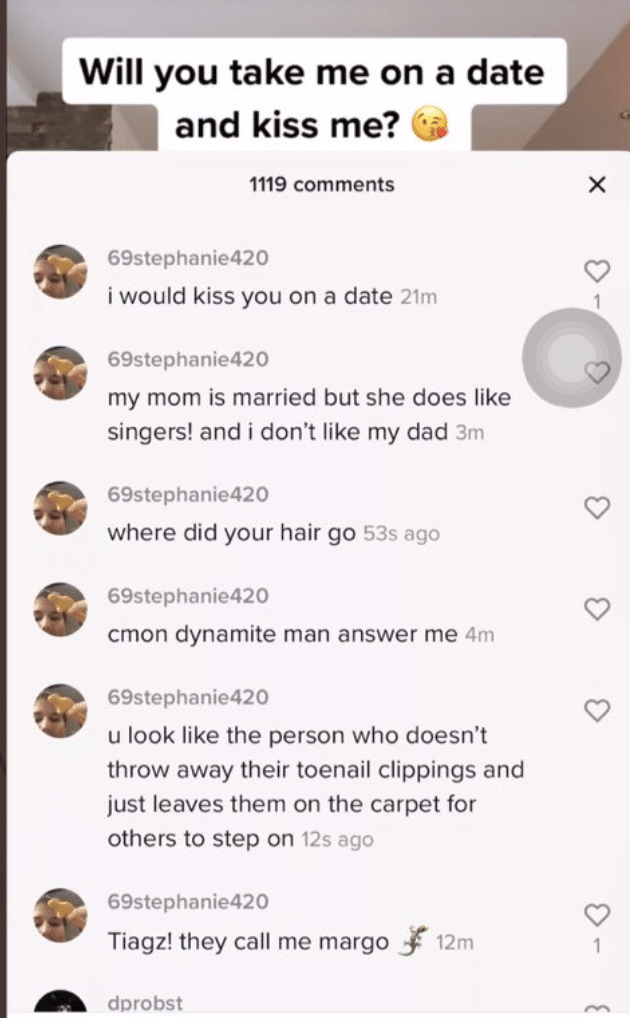 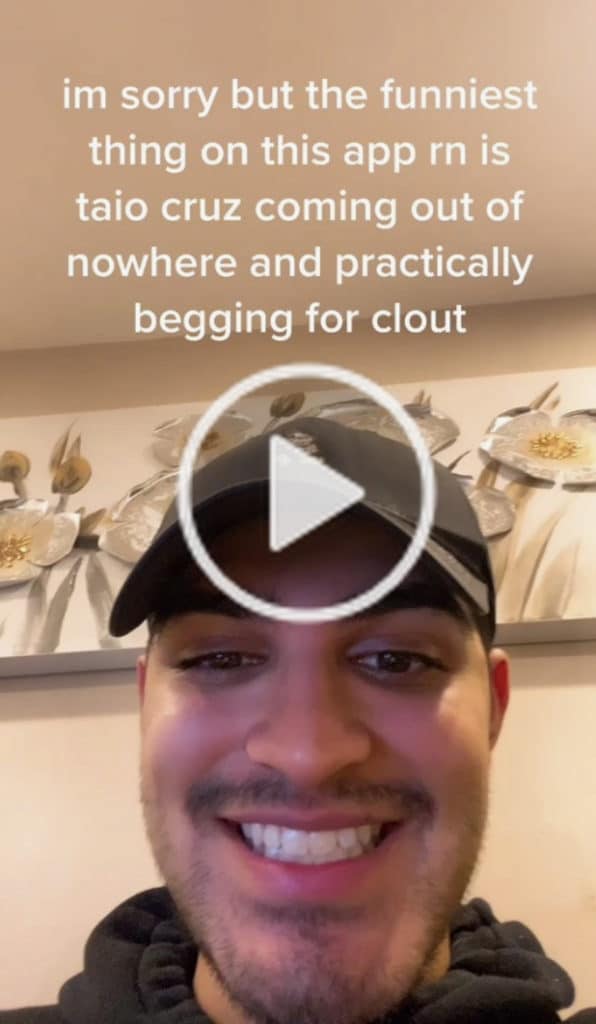 Sadly, after just a few days on TikTok, Cruz could not endure TikTok’s negativity any longer leading him to remove all of his videos and post this statement. 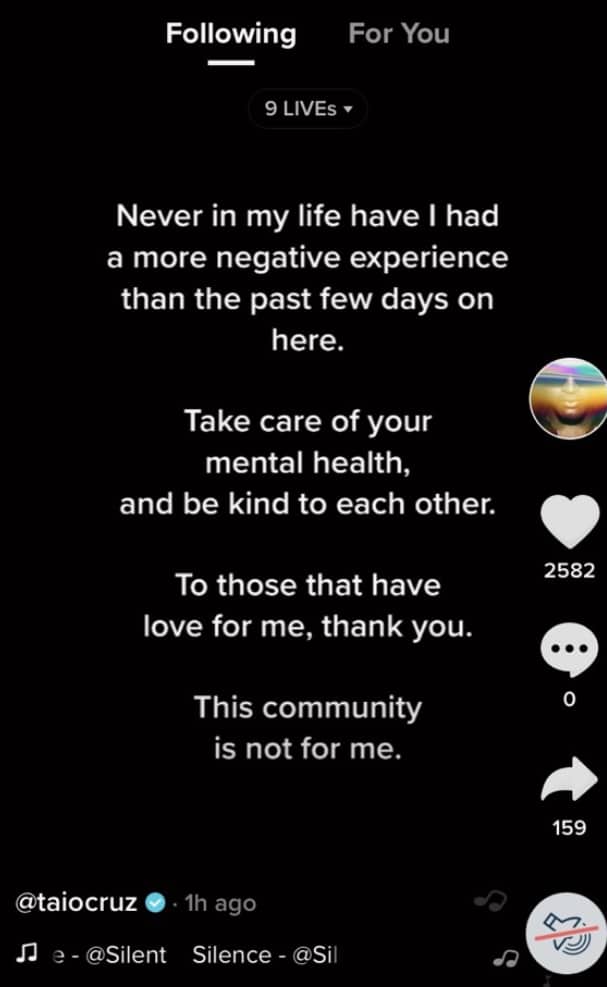 After first-handedly experiencing the downsides of social media, Cruz also deleted all of his tweets and Instagram posts.

Cruz’s statement led users to point their fingers at one girl in particular who had previously started a TikTok war with Cruz.

TikTok user Jackie Fandler spammed Cruz’s comments asking him to follow her back, but Cruz removed all of her comments. Then, Fandler duetted one of his videos accusing Cruz of deleting her comments leading people to spam Cruz asking why he removed her comments. When Cruz announced his departure from TikTok, Fandler was swarmed with hate and death threats as people blamed her for his exit from TikTok.

This girl has made several videos basically saying how @TaioCruz lied to her about deleting her comments she spammed his comments telling him to follow her And her supporters ran him off the app after a couple days. Her bio is quite ironic pic.twitter.com/UWu1qtdIDS

please tell me you guys have seen them #taiocruz #beef

After being overwhelmed by all the hate, Fandler posted this TikTok to explain her side of the story.

i apologize for commenting multiple times on his post- however, i encourage you all to rethink your actions and words 🙂

In the TikTok, she claims that she spammed Cruz’s comments and made the duet as a joke, and she apologized to Cruz for the excessive comments and hate he was getting from her video.

Even though some were quick to blame Fandler, the reason Cruz left is that he believes social media is a toxic place.

Cruz’s fans are now expressing their anger and disappointment with the TikTok community for causing the ‘Dynamite’ singer to once again disappear from the public eye.

Taio Cruz made a tiktok last week and today the youths cyber bullied him so hard he deleted everything??? Millennials assemble and show our guy some love!!! #WeLoveYouTaio !!! pic.twitter.com/FjIkeJCeTb

I JUST NEED TO KNOW WHO BULLIED TAIO CRUZ OK TIKTOK…THE MAN THAT GAVE US TWO ICONIC SONGS DURING OUR CHILDHOOD pic.twitter.com/Pa2VNObHLa

Dixie D’amelio – a popular TikToker who is starting to dip into the music industry  – is speaking out against the bullying Cruz has endured as she is too familiar with TikTok trolls.

y’all bullied a legit music artist (which is know for being one of the harshest industries) off tiktok in under a week…WHAT??? just be nice wtf

Sometimes we forget how powerful words are – especially when we can hide behind our screens. TikTok does have many perks, but the reality is that with love comes hate. When one is successful or holds a celebrity status, they are more susceptible to hate as people do not think their words matter – but they do. We have to remember that despite someone’s wealth or success, we are all human and vulnerable to the same feelings when faced with negativity.

How do you think TikTok should change to become a more welcoming environment? And is there still hope for a ‘Dynamite 2’?