Irish horse racing trainer Gordon Elliott has been temporarily banned from competing in Britain, following an image which surfaced the Internet of him sitting on top of a dead horse. Elliott is pictured posing, holding the phone on one hand while making a “V” sign with the other. In combination with his facial expression, he seems to appear as being part of a pleasant incident, sparking speculation that the image may have been faked. An official apology however acknowledged its legitimacy, causing an outpour of comments from the horse racing community.

In his statement, Elliott declared that the photo “was taken some time ago and occurred after a horse died of an apparent heart attack on the gallops.” He claimed that whilst waiting for help to come through, his phone rang and he unconsciously sat down to take the call. As for his hand gesture, he explained that it was a way to inform a member of his team who had just arrived, to wait until he ended the call.

This is the horrible image of Gordon elliot sitting on a dead horse clearly smiling and making fun of the situation with a comment at the bottom,i hope he's punished severely for his disgraceful behaviour,these are the animals he's "supposed" to love and care about so much rip pic.twitter.com/elvrO3uMAt

The provocative nature of the image caused international outrage, demanding his removal.

“Without thinking I sat down” on the body of my dead horse, with a dirty grin on my face, and posed for a photo.

Gordon Elliott emphasized in his apology the fact that the incident was unintentional.

“Firstly, I apologize profoundly for any offence that this photo has caused and can categorically state that the welfare of each and every horse under my care is paramount and has been central to the success that we have enjoyed here at Cullentra.” His response came after the photo went viral, as people were impatiently waiting for an explanation.

“The photo in question was taken some time ago and occurred after a horse had died of an apparent heart attack on the gallops. I appreciate that an initial viewing of this photo suggests it is a callous and staged photo but nothing could be further from the truth.”

He ended the statement saying that he is willing to cooperate with the investigation set by the Irish Horse Racing Regulatory Board.

I’m aware of a photo in circulation on social media. The I.H.R.B. have been in contact with me regarding this photo and I will be cooperating fully with their investigation.

The British betting company Elliott had also been an ambassador for, decided to drop their collaboration.

“While we recognize that Gordon deeply regrets and apologized unreservedly for his poor judgement his actions are completely at odds with the values of the Betfair brand and that of our employees.

“With that in mind, we have decided to discontinue our association with Gordon with immediate effect.” 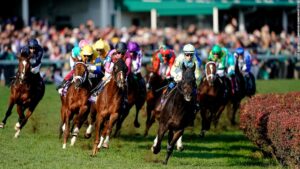 Even though Elliott is licensed in Ireland, he had entered races in Britain, automatically meaning that BHR rules would apply. The organization was quick to step forward saying that the owners who had horses trained by Elliott would have to be transferred to a different trainer.

“The BHA is appalled by the image that appeared this weekend. We expect all those in our sport to demonstrate respect for horses, on the racecourse, in the training yard, on the gallops, and wherever they have horses in their care. People who work in our industry believe their values – of caring for and respecting our horses – have been deeply undermined by this behavior. On their behalf, and on behalf of all horse-lovers, we say unequivocally that British horse racing finds this totally unacceptable.”

Living in an era widely taken over by cancel culture, such instances trigger the question whether people like Elliott should be punished for the rest of their lives. In a statement to the Racing Post made on Monday, Elliott expressed his concern over the matter as he believes himself and his team will be suffering from this unfortunate occurrence for a long time. Forgiveness tends to open the gateway to understanding, however in such harsh instances it is tough for people to feel compassion or empathy even after a sincere apology. Time will tell if Elliott’s name will be cleared from the “blacklist” of the horse racing community.