Justin Bieber’s “bad boy” reputation is officially put to rest as he made some ‘Changes’ and is now utilizing his platform to encourage fans to spread kindness – especially during these difficult times.

After dropping his new song ‘Holy’ featuring Chance The Rapper, Bieber and Chance teamed up with CashApp to give away $250,000 to those who are struggling from the current pandemic.

Thanks for the love on Holy. @chancetherapper and I are partnering with Cash App to give away a total of $250k today to those affected by these hard times. Tell us your story if you feel like sharing. To enter drop your $cashtag & use #JBChanceHoly pic.twitter.com/zbTWGQIHYi

Thanks for the love on Holy. @justinbieber and I are partnering with Cash App to give away a total of $250k today to those affected by these hard times. Tell us your story if you feel like sharing. To enter drop your $cashtag & use #JBChanceHoly pic.twitter.com/FlsHRwpQ42

Last week, Bieber and Chance released the ‘Holy’ music video where Bieber placed himself in the shoes of millions of people all over the world.

At the beginning of the video, Bieber and his fictional wife are seen in their working class jobs and are content as they have a strong bond and community. But everything comes crashing down as Bieber loses his job – a scene too many have experienced in real life.

Because Bieber cannot pay rent, he and his music video wife are evicted from their apartment and become homeless. However, the couple’s spirits are lifted when a solider returning home to his family offers to give them a ride and a warm meal. At the man’s home, the couple’s frowns turn into smiles and laughter as the man welcomes them into his family.

This video was very impactful because it allows people to relate with what the couple has gone through as well as motivating others to show the same kindness the soldier did for the couple.

Wanting to do as they preached, Bieber and Chance started #JBChanceHoly on Instagram and Twitter to allow those severely affected by the pandemic to share their stories for a chance to win $500 from a $250,000 fund.

Thanks for the love on Holy. @chancetherapper and I are partnering with Cash App to give away a total of $250k today to those affected by these hard times. Tell us your story if you feel like sharing. To enter drop your $cashtag & use #JBChanceHoly

Thanks for the love on Holy. @justinbieber and I are partnering with Cash App to give away a total of $250k today to those affected by these hard times. Tell us your story if you feel like sharing. To enter drop your $cashtag & use #JBChanceHoly

This opportunity led thousands of people to flock to social media and open up about their struggles with the pandemic – in hopes that Bieber and Chance will help them leap over their obstacles.

my fiancé & I are struggling to pay bills due to me being the only one working bc of covid & now my hours are being cut so I’ve been having panic attacks again bc of my anxiety & being worried 24/7 about how to pay for things we need $aleshamarie16 #JBChanceHoly pic.twitter.com/aFVE44VxMt

I began my business right before the beginning of covid and due to the type of business I’m starting I’ve been at a stand still ever sense. 2020 has been super mentally draining but we’ll get through this (hopefully)! $Bucaya #JBChanceHoly

i just lost 2 of my aunts in the same day, 2 hours apart. i’m starting college in 2 weeks and have no way to pay for textbooks. i can’t get a job bc of covid. my family’s falling apart & i’m losing everyone close to me, my life’s honestly just falling apart💔 pic.twitter.com/uDPmfddjBE

Because so many people hopped onto the hashtag to share their adversities, unfortunately, Bieber and Chance could not help everyone. However, there were still a lot of people who were noticed by the public figures and given a significant amount of money.

One person who was gifted $500 is a woman struggling to pay for her college tuition while tackling the hardships of owning her own nail and esthetics business during the pandemic.

This year I was supposed to start working in my field to start saving up for the future but due to covid I had to put all that on hold but as I still go to college, with tuition and books and everything, times have gotten a bit hard on my family and I $KinahV #JBChanceHoly

I have also decided to start my own business as well so being an entrepreneur has been a financial strain at times too, this probably wont be seen but I'd really be grateful if anything was given. This is an amazing blessing $KinahV #JBChanceHoly

Because she is a huge Bieber fan, she decided to sell ‘Holy’ themed acrylics to help make ends meet.

After being rewarded with $500, Chance The Rapper retweeted her tweet of thanking the rapper for her gift.

Another recipient of the cash prize is a man who shared his story on how he and his girlfriend are expecting twins but are homeless and in desperate need of some financial assistance to help support his family.

Hey man, me and my girlfriend have been put in a hostel due to being made homeless and are really struggling, especially as we’re having twins. I’m a massive fan and have been since I made a lyric video for Bad Day for you! I’d appreciate the help! £LDFlexin ❤️ #JBChanceHoly

A familiar face to Bieber also won the cash prize as their father was featured in the ‘Stuck With U’ music video, but have been fighting to stay afloat after their father passed away with COVID-19 and their stepmother losing her job. 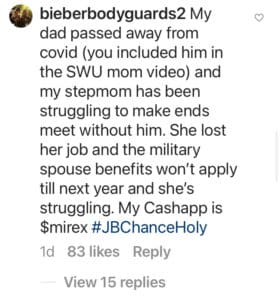 Not only did Justin include me and my dad in his stuck with u music video when my dad passed away from covid-19, but he just sent me $500 so I can help my stepmom and family financially in his absence. Thank you for being the amazing person you are @justinbieber. You are such a blessing. #JBChanceHoly

Bieber and Chance also helped a woman who had multiple brain surgeries due to an aneurysm and is unable to pay her medical bills. 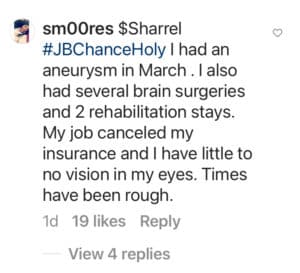 CHANCE THE RAPPER SENT ME $500!!! #JBCHANCEHOLY

These are just some who have received monetary gifts from the artists as many others are sharing their appreciation for Bieber’s and Chance’s kindness.

During these rough times, Bieber and Chance are exhibiting the importance of lending a hand to those who are in need. Every person has their own story – whether it be losing their job or struggling to balance school and family life – and so many are distressed. Bieber and Chance gave people the opportunity to share their stories and make their lives a little bit easier, and we should follow in Bieber’s and Chance’s footsteps in spreading kindness.

What are your thoughts on Justin Bieber ‘s and Chance The Rapper’s efforts to spread kindness? Did it work? What are some steps you can take to help those who are going through hard times?