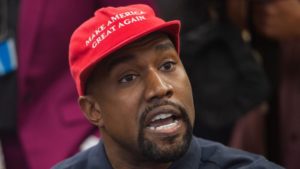 On July 4th, American rapper and the founder of Yeezy, Kanye West, announced on Twitter that he will run for the 2020 presidential election. The astonishing Tweet received 526,400 Retweets and comments and 1.2 million likes. However, this enthusiasm didn’t last long. In just two weeks, Kanye’s presidential campaign took a big turn. According to Steve Kramer, Kanye’s presidential campaign assistant, Kanye is “out.” He also added, “any candidate running for president for the first time goes through these hiccups.” However, Kanye himself had not yet disclosed anything regarding this matter.

Kanye originally intended to run as an independent. When he first announced his presidential campaign, he was already too late to register as a candidate in some states. These states include New York, North Carolina, Texas, Maine, New Mexico, and Indiana. For some other states, while it wasn’t too late, Kanye had a very limited time to gather a significant number of signatures. According to Kanye’s presidential campaign team, the rapper tried hard to appear on the ballot in Florida and South Carolina. However, Kanye needed to gather 132,781 valid signatures in less than one week to appear as a legitimate candidate in the Sunshine State. In order to achieve such a goal, Kanye hired staff and called for volunteers. An anonymous staff member shared that he got $5000 for just one week of work.

On July 9th, the rapper posted a short video clip, featuring himself registering to vote. In the video, Kanye said he “just wanted to show you how to register to vote.” the rapper then went to the county clerk’s office and filled out his registration form. At the end of the video, Kanye West pointed out disenfranchisement and proposed the question “why is it so hard to vote in some states?” While the tweet received 72,200 likes, some people questioned Kanye’s late registration. Regardless, the rapper clearly has an interest in the political realm.

However, soon after this video was posted, Steve Kramer told the press that Kanye is “out”. Later, Krammer added that he has “nothing good or bad to say about Kanye. Everyone has their personal decision about why they make decisions. Running for president has to be one of the hardest things for someone to actually contemplate at that level.”  Kanye West himself had not yet announced whether he would discontinue his presidential journey.

While the rapper remained silent, the internet exploded. His fans expressed their disappointment, while his opponents felt like they took the right side. One user said, “WaKanye Forever was unfortunately WaKanye No-never.”

Oh, no! This changes everything: https://t.co/vTfCqrwI4T

What do you think? Comment down below! For more celebrity and social media news, follow WhatsTrending. Recently, Ivanka Trump sparked backlash after Goya Beans memes go viral. Check out this article and video to learn more: