A ‘Karen’ in Houston, Texas faked calling the police on a black census worker for simply doing his job. No…seriously…he was just doing his job.

It seems as if there is a new Karen video on the internet every day. This latest one in Houston, like many others, is just plain frustrating.

A video was posted on Reddit showing the interaction between ‘Karen’ and the black census worker. The video shows the woman not happy about the man being in her neighborhood. She picks up her phone warning him that she was calling the police. While on phone, she was saying he was approaching her and threatening her but in the video, he clearly wasn’t.

She complains that he was standing in front of her neighbor’s house and told him he didn’t need to be there. Although, I think his job would disagree with that.

Houston Karen calls the police because there’s a black census worker in her neighborhood 🐶 Tuckbot ….Karen gonna catch these hands if she impedes my life Liberty or pursuit of happiness ever ! https://t.co/DiTBPKqyAx

This video got a lot of attention. Many people commented about the Karen’s behavior and how it was unacceptable.

One user on Reddit thought they were both in the wrong. He commented, “My takeaway from that was he wasn’t properly dressed for the job. Specifically a cencus worker should wear clothing that fits in (the neighborhood he’s working) yet still looks professional. He failed on both parts.”

But others were quick to come to the census worker’s defense.

Another commented their own experience working for the Census Bureau.

“I did census work in 2010 and I had a handful of issues of people freaking out. I can just imagine how bad it’s been this year. Funny thing, when I went for training for the census, the people from DC reminsced on how back in 2000 and before, census workers could actually call the cops on people refusing to answer their questions. That obviously was suggested in 2010.”

In the second video, the cops arrive at the scene. The census worker explains to one of the officers why he was standing in front of the neighbor’s house, stating, “I am a government employee. I was conducting census business right now. If this neighbor here they wasn’t home, that I met in front of 28-23, they wasn’t home. They ain’t been home. And this neighbor right here didn’t want to give any information but since they haven’t been home, they haven’t did they they need to do. So I had to come out here physically and find out what was going on.”

He continued explaining, “So she came all the way down from here and she walked all the way down to here to ask me what am I doing. And I didn’t know who she was and so since she approached me I felt threatened.” The man was still inside his truck when the woman approached him. “I figured it had to be because I am black.”

Several people were sad to see how this was handled. 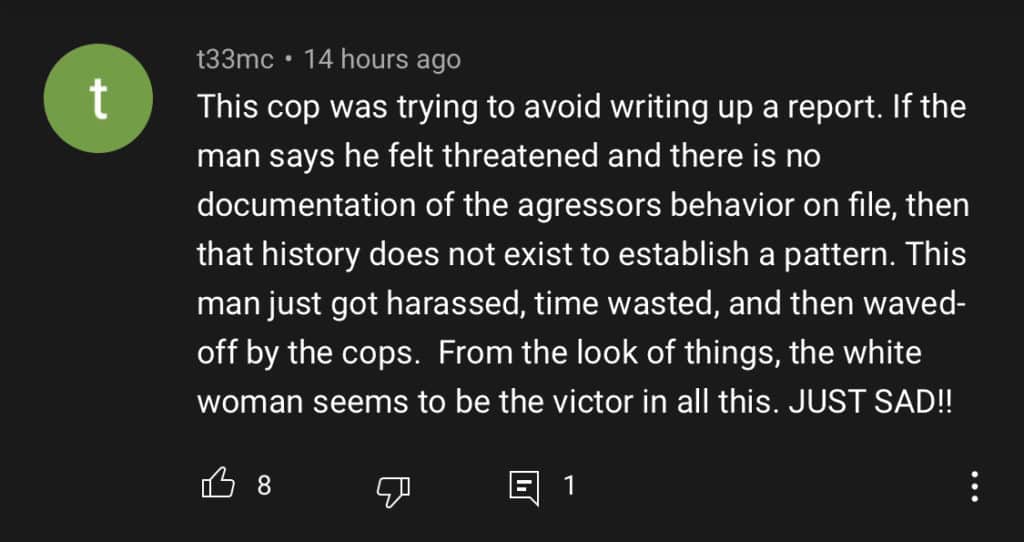 One of the officers goes to the neighbor’s house to get some information. After waiting for some time, the census worker called the cops himself to file a complaint against the Karen that approached him.

Towards the end of the video, the officer and the census worker starts arguing about police brutality. The officer asked him if he gets all of the facts before making statements about situations. The census worker eventually says he does not want to get into anything about the past but wanted to clarify that if the roles were reversed the situation would have gone a lot differently.

The Karen that approached the black census worker did not come out of her house to speak to the police. The cops did not have access to her door because her gate was locked. The officer informed the man that in fact, his call was the only call that the cops received. He told the officer that he waited for two hours for them to show up. Sarcastically thanking them for getting to the scene so promptly.

This comment agreeing that the situation would be different if he was white.

A neighbor told the officer that the Karen has had problems with people in the past. He explained that she has ‘psychiatric problems’ and is very ‘paranoid’ that someone is after her.

A viewer on YouTube commented that the ‘psychiatric’ issues should not be an excuse.

Another disagreed with the way the census worker carried on. 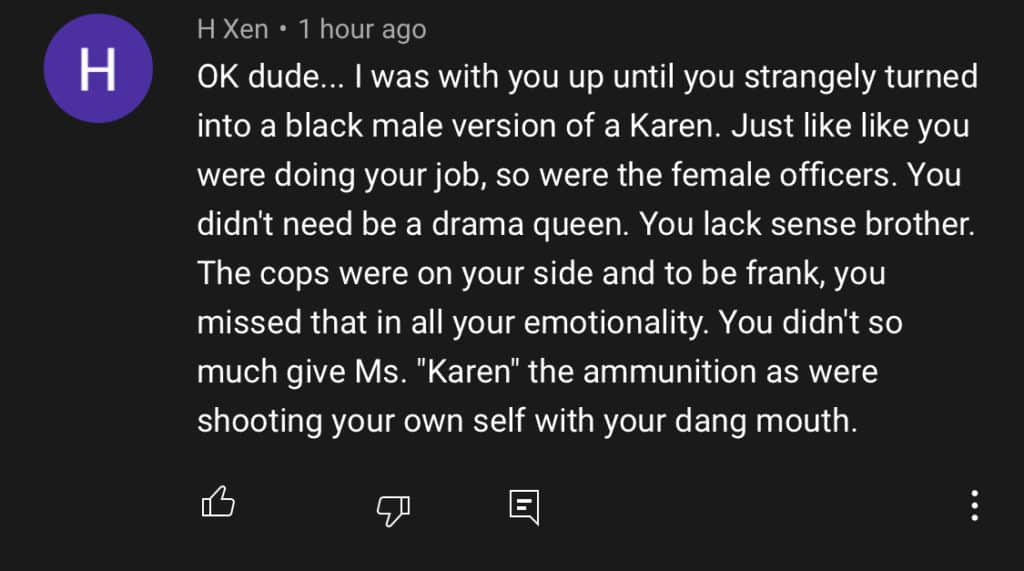 The officer told the man that he couldn’t file anything because nothing the woman did is considered illegal. There you have it, folks. Another day another Karen.