Okay so we feel like teachers of 2020 have been doing cartwheels and more to keep a lot of the students these days educated ans safe. With COVID-19, many teachers were forced to take their academic classrooms to the drawing board and come up with new concepts to get learning across.

Being honest, teachers have had it really rough. Teachers have been having to deal with other obstacles that include now parents feeling like they have the right to supervise the learning going on in the virtual classroom. In this case, one mother decided it would be best to interrupt her high school students’ virtual class to let the teacher know how she really felt about the movie being presented to the young ones. In the end, the students ended up snapping right back at her and defended the teacher for showing the movie.

In the video, which has been highly shared across TikTok and more, the woman appears to have been speaking for quite some time, for that we are not sure of. Her statement prompts the teacher to step in and reprimand her saying “Ma’am, you can’t talk like that. We’re in class,” he tells her.

She responded to his claim saying I want to know how that movie, with people making out, is pertinent to high school education!” the parent yells in return. She adds that she complained to the principal and tells the teacher that he needs to “actually educate.”

when a Karen gets mad over her 18 year old son watching an approved movie in class.. #freetheteach #watchmegrow #fyp #gamingsetup #foryoupage

Due to the comment, not one but several students jumped in while recording the incident going on in front of them. Some of them defended the teacher saying things like “he’s a good teacher! You wouldn’t know!

Many other incidents of parents jumping onto the scene of video chats with their children have been reported. Recently, a woman was dubbed a Karen for trying to stop the class in which her student was in from discussing any history about BLM, Black Lives Matter. 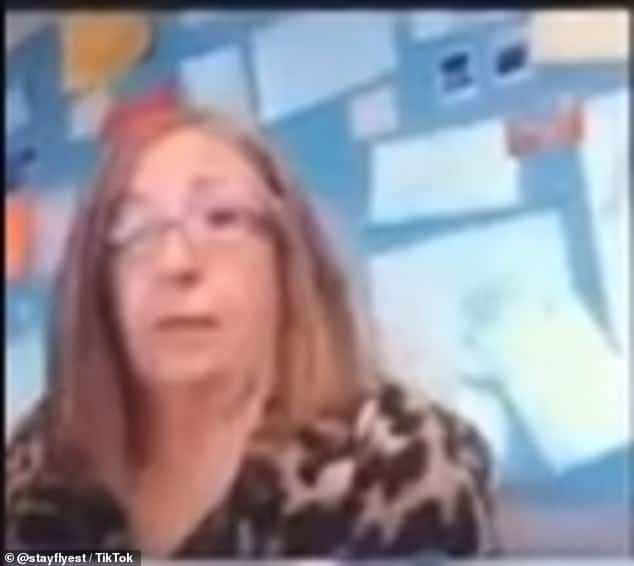 The class was reporting about current events and history when the woman interjected and said the class would not be able to discuss any of it without her opinion.

Many teachers play movies throughout the lifetime of their teachings. A lot of the people wondered what movie it could have possible been to make someone so upset? Well, it was Romeo and Juliet and let’s say that overall she made a big deal out of nothing. The woman claimed that there was too much “making out” going on in the movie, which can be up to a viewers opinion, but the kids were quick to shoot this woman down.

Though the TikTok clip was originally posted just before Thanksgiving, it’s gone viral this week, with people praising the students for speaking up for their teacher and themselves.

“My respect for the class speaking up,” @angeltredelagarza wrote.

“School staff really can’t defend ourselves without getting in trouble or fired,” @bethanyozuturk reminded everyone. “That student speaking up means the world!!!! Thank you!”