Claudia Conway has been a hot topic in regards to politics, having her mother be the infamous Kellyanne Conway, former senior counselor to President Trump. The 16 year old is a popular TikTok-er, posting controversial videos in opposition of her mother’s political position and beliefs, but she took to the platform yesterday on November 15th for a different reason. Claudia auditioned for American Idol season 19 and kept her 1.4 million TikTok followers up to date about the entire event, teasing with a short snippet:

Claudia Conway is not just about standing up against her mother’s politics. She posts a few rare videos on TikTok’s showing off her pipes…and she is actually talented. Just check out this cover of Hozier’s ‘Take Me to Church:’

WHY IS IT SO MF FAST

#duet with @jonny.perl i need to stop doing these

At only 16, Claudia is attempting to make a name for herself outside of her parents’ political careers even if that is how she got famous in the first place.

Claudia Conway is mostly known for her opposition towards her mother and her mother’s politics, building up her TikTok platform with over a million followers. While she does partake in popular TikTok trends, her page is filled with videos of her showing her support for liberal politics and her despise for Trump, despite her mother being a major figure in The White House and Fox News.

In a recent video, Claudia is seen taking part in the “Pizza Hut/Taco Bell” trend with a twist involving her mother’s White House career. Watch for yourself:

In this TikTok, Claudia is seen bashing on new Supreme Court Justice, Amy Coney Barrett, who was recently appointed by Donald Trump.

And against her mother’s opinions, Claudia encouraged her followers to vote for Biden with a #settleforBiden TikTok.

let’s SECURE our rights and VOTE HIM OUT! tag people as you duet 💙 @xobrooklynne you’re up next bby

At just 15 years old, Claudia’s TikTok fame and Trump disdain, forced Kellyanne Conway to leave the White House to focus on her family. Claudia’s TikToks made their way to Fox News, and did not look good in the eyes of the conservative community. What did Claudia do in light of the announcement…she made a TikTok.The video was captioned: “Me making my mom leave the White House to take down the administration and save America.”

In October, Claudia nearly broke the internet when she exposed her mother’s COVID-19 diagnosis after President Trump came down with the illness, which her mother attempted to keep private in fear of backlash.

♬ smack my blank like a drum – andy war

She followed up the initial TikTok with a reminder to wear masks and to steer away from Trump’s ill-informed opinions on Covid-19. (Warning: this video contains profanity)

In July, Claudia posted this Twitter before leaving the platform saying “my parents are forcing me to delete social media so this is my last tweet. apparently, i don’t have a platform! it’s fake! love you all so much. keep fighting.” While she has stayed off if Twitter, her other platforms have grown in popularity, where she continues to talk about her family and their controversy. 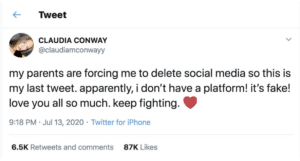 We will wait to see how far Claudia will go in the next season of American Idol and if her TikTok stardom will boost her chances of winning. Until then, we are sure Claudia will keep everyone updated TikTok in both singing and her mother’s politics.