Halloween, for the majority of us, consisted of getting into a cute costume to watch a halloween movie from our couches. In the midst of a pandemic, doing anything outside of our homes risks the chance of contracting the virus, a chance most of us cannot afford. Kendall Jenner is just one of the many celebrities that decided she was not concerned the safety or health of her family, and threw a huge star-studded 25th birthday party–unmasked. The model dressed up as the 90’s icon, Pamela Anderson, and rang in 25 with several of Hollywood’s hottest A-listers including the Weeknd, Justin Bieber, and Jaden Smith. Check out some of Jenner’s low-key pictures. 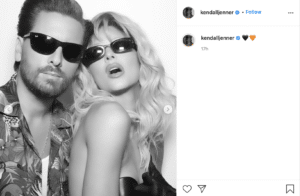 Fans are having MAJOR issues with Jenner’s birthday bash as hundreds of thousands of people have died and celebrities are taking no precautions from spreading the airborne illness. The worst part is: it is rumored she attempted to hide the celebration from being posted on social media, which is why he pictures posted in Instagram are so low-key, with a couple of  very close friends and family. She even had signs at each seat with the note, “No Social Media: take all the photos you want, but please do not post on social media of any kind.” It is assumed she wanted these at her party because of all the heat celebrities are getting from not following CDC recommended guidelines to prevent the spread of COVID. A room of full of celebrities and influencers, of course, did not listen to the posted signs and splattered her party all over socials, igniting the response from disappointed fans.

not Kendall Jenner hosting a Halloween party in the middle of the pandemic and making a "no social media" rule so people wouldn't know pic.twitter.com/ZfmvooNMkk

Just look at The Weeknd’s post. Anyone see any masks here? What about social distancing? We didn’t think so.

People are angry and confused. How could Jenner be so disrespectful and ignorant when people are contracting and dying from Coronavirus everyday. We all miss gatherings and being with our friends at lavish parties, but most of us know that it just is not worth the risk of spreading it to high-risk people like our parents and grandparents. It is painful to watch celebrities put the rest of the world in danger to have a sense of normalcy for a one night, while the rest of us have to FaceTime our family and friends for months on end because of this reckless behavior. Twitter was quick to throw Kendall Jenner and her friends under the bus and hold them accountable for their actions.

Kendall, you are not sneaky.

no but kendall jenner really threw a big ass party with all those celebrities without masks in the middle of a pandemic with a “no social media” rule so people wouldn’t find out about it…. pic.twitter.com/RcRSUEBQ5o

What can we say? These celebs are so hypocritical, it is ridiculous.

not all these celebs posting about wearing a mask, social distancing then showing up to kendall jenners party. eat the rich pic.twitter.com/NmPkOXaU1x

CAN ALL THESE CELEBRITIES AKA KYLIE JENNER, KENDALL JENNER, JUSTIN BIEBER, NIKITA DRAGUN, JADEN SMITH TO NAME A FEW STOP BEING IGNORANT TOWARDS THIS VIRUS THERE ARE PEOPLE THAT ARE DYING U DONT NEED A HALLOWEEN PARTY

the US hit 100,000+ cases yesterday and kendall jenner threw a birthday party (w/ no masks of course).

meanwhile the rest of us were all inside and not allowed to celebrate with our friends. but we’re the problem.

As Twitter does best, they posted several memes to poke fun at the levels of stupidity that took place for this party to happen. The same celebrities that are reminding us every 2 minutes to wear a mask, socially distance, and vote…are the same ones attending this party and putting everyone they “root” for at risk.

celebrities telling everyone to stay home/wear masks but then going to kendall jenners party, no mask, not one! maybe they’re exempt🧍🏽‍♀️ pic.twitter.com/gFwPXl3iFW

the weeknd, doja cat, will smith, saweetie, justin bieber, kardashian-jenners, travis scott, tristan thompson and everyone else at kendall’s party in a few days pic.twitter.com/lJArZW3SJn

kendall jenner when everyone finds out about her party pic.twitter.com/FhtKWu9txD

Not the first in her family

Just last week, Kim Kardashian-West came under major fire for celebrating her 40th birthday on an undisclosed private island with a few dozen of her closest friends. It stirred up conversations about wealthy celebrities getting to live normal lives again, while the rest of the world struggles to get by. Kardashian-West, even went as far as calling herself ‘humbled’ by her ability to do something so lavish for her friends and family. She also mentioned that everyone received health screenings before being flown out.

40 and feeling so humbled and blessed. There is not a single day that I take for granted, especially during these times when we are all reminded of the things that truly matter. pic.twitter.com/p98SN0RDZD

Now after Jenner’s party, which she tried to hide from the public, maybe Kim’s private island birthday does not look so bad after-all? At least, Kim was transparent and tried to self-isolate on an island. Kendall Jenner just partied at a Hollywood restaurant with no precautions, even after the news broke about Khloe and Kanye both coming down with COVID-19 this March and July. The family obviously knows the severity of the virus,  but does not mind downplaying it for some birthday celebrations.

We will wait to see what celebrity breaks and throws an irresponsible shindig next. Until then, do not forget to wear your mask and socially distance!