Daughter of Seinfeld co-creator, Cazzie David published her first book, “No One Asked For This,” only to be met with mixed reviews of praise and backlash for her privilege.

Cazzie David is probably most famously known for being the eldest daughter of 90’s sitcom hit wonder Larry David, but she is slowly making a name for herself. Since graduating from Emerson College, she has turned to writing as a way to express herself. As per her author’s bio, she is currently a columnist for Air Mail and has previously written for publications such as Vanity Fair, Glamour, InStyle and Vogue. David has kept herself busy during quarantine by focusing on finding a “quarantine boyfriend,” which is the plot line of her Instagram animated web series with Owen Thiele entitled, “r u mad at me.” 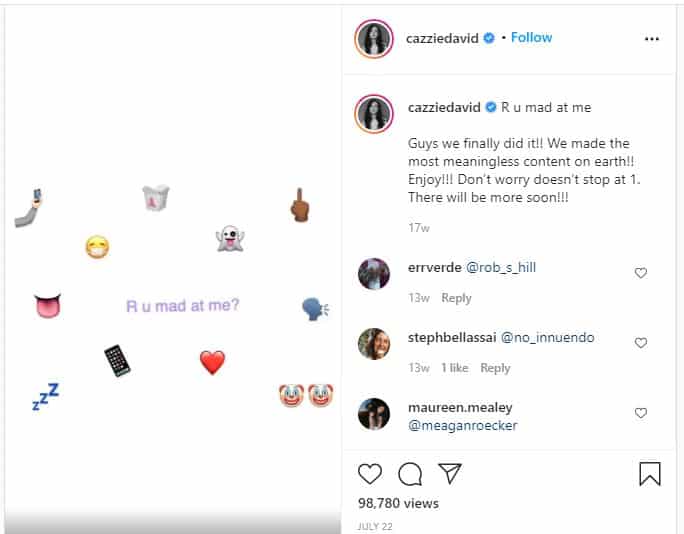 David is probably most secondly famous for being dumped by SNL star, Pete Davidson, for pop singer Ariana Grande. She has been private about the break up with the comedian for years until now. She actually discusses the break up and her relationship with Davidson in her new book.

No One Asked For This

“No One Asked For This” is a collection of essays written by David summarizing her self proclaimed embarrassing existence. Taking after her father’s witty, self deprecating humor, she uses her book to explore her “deeper insecurities and the universal things that no one really talks about, but that on some level everyone can relate to,” according to her interview with Vogue.

It seems like she writes about almost everything in her book. David has been receiving a number of raving reviews from big name publications to celebrities. PopSugar said, “the sharp, anxiety-fueled essays in Cazzie David’s No One Asked For This are exactly what the world needs after a year like 2020. David tackles social anxiety, shame spirals, and existential dread with the kind of gallows humor that will surely make her famous father, Larry David, proud.”

Comedian Amy Schumer said, “Cazzie David is one of the funniest, most original writers of this up-and-coming generation. This book couldn’t have come at a better time.” Schumer joined David for one night of the No One Asked For This virtual book tour. Other celebrities featured on the virtual book tour included her father, Larry David, and Chrissy Teigen.

Despite the rave reviews featured on David’s Instagram, not all readers have enjoyed her work. In fact, many readers have found Cazzie’s writing to be very unrelatable, as most didn’t grow up with the kind of privilege that we assume Cazzie did.

An Amazon user titled their review of the book, “Curb Your Self,” a nod to Larry David’s show, Curb Your Enthusiasm, but channeled at Cazzie’s privilege. The paragraph review starts off, “not funny, not insightful, not even well-written memoir by a young lady whose seeming talent is being Larry David’s daughter.” Yikes.

The review concluded by saying, “let’s hope the second edition contains an epilogue of her life after she follows her mother’s admonition to get a job at Starbucks and grows-up into someone a reader can relate to.” Honestly, maybe this book reviewer should get their own book deal after this novel of a review. 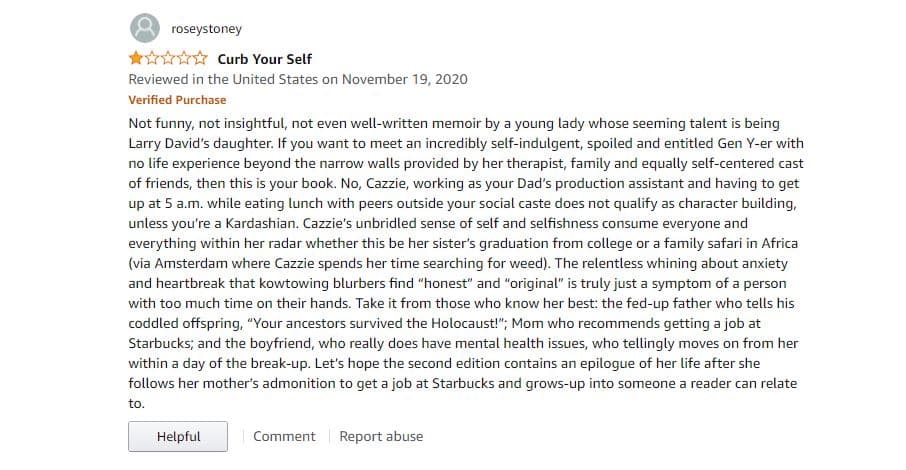 But the reviews on Twitter aren’t much better than that.

Cazzie David's new book really demonstrates that the essay collection has overtaken the autobiography as the personal branding method of choice for bored rich girls.

Kristin Chirico, formerly known for being part of the Buzzfeed ‘Ladylike’ cast, REALLY had a lot to say about Cazzie’s book.

Also I just really don't want to hear thin people talk about food anymore. I'm sorry. I've reached my lifetime capacity. Please try someone else. I am just not the audience for you.

Wait, transphobic? Chirico is referring to the essay of David’s book, ‘Too Full To F**k,’ where as Insider explains, that she defined heterosexual sex “as a man inserting his penis into a woman’s vagina, which was criticized as reductive and even transphobic, given that some transgender men don’t have penises and some transgendered women don’t have vaginas.”

But there are other things besides transphobia that readers are upset about.

This Twitter user thinks what’s happening with David’s writing could be good material for an episode of Curb, urging Cazzie to actually own her self depreciation and take advantage of her privilege by exploiting her life on her dad’s show.

But the negative reviews haven’t deterred David from continuing to self promote on Instagram, or her celebrity friends from pumping her up. Most recently, Lorde interviewed David for Interview Magazine.

Lorde & Cazzie David talk about the origin of their friendship in new @InterviewMag conversation. 💕

So the bad reviews haven’t phased David! She has already proven that she has inherited her father’s self deprecating humor and knack for creating. According to Vogue, she is doing something with HBO Max now, so we’ll be on the lookout for what she does next!