When teachers need to motivate their students and add a fun element to their class, they turn to the best teacher in the business, Ms. Frizzle. The 90’s animated TV series ‘The Magic School Bus’ features Ms. Frizzle taking her students on wild field trips to help them learn the lessons of the day. Many 90’s and 2000’s kids can still recall their favorite moments from the educational series and the fun facts they learned. Most have fallen in love with Ms. Frizzle’s perky personality and creative outfits – except one man.

Why He Despises His Girlfriend’s Style?

In a Reddit post, a 43-year old man explained his dilemma of how he is bothered by his 34-year old girlfriend – who is a preschool teacher – dressing like Ms. Frizzle. 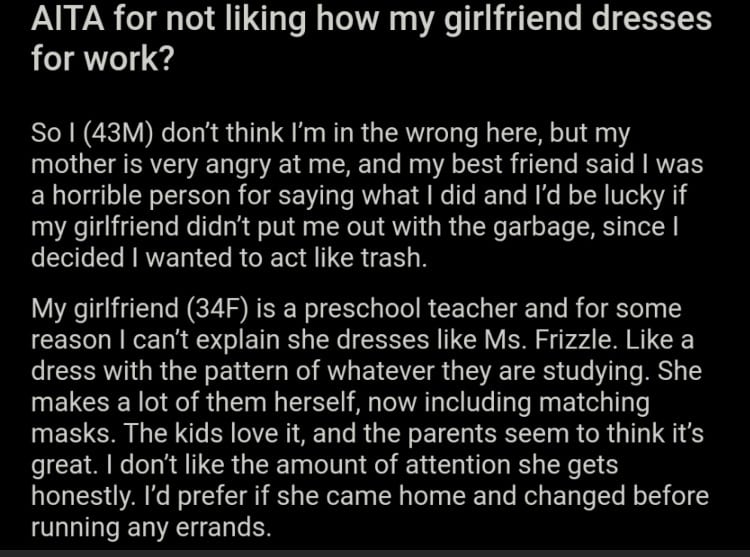 He starts his rant with, “I don’t think I’m in the wrong here,” but wants to get people’s opinions on his situation because his mom and best friend think he is wrong.

In the second paragraph, he goes on the explain how his girlfriend wears dresses and matching masks with patterns that correspond to what her students will be learning that day, like Ms. Frizzle. After acknowledging that her students and their parents love her outfits, the man says he does not like the amount of attention she gets and prefers if she came home to change before running any errands.

In response to her boyfriend’s concerns, the girlfriend said that her boyfriend does not have to like how she dresses and he has no right to tell her how to dress. 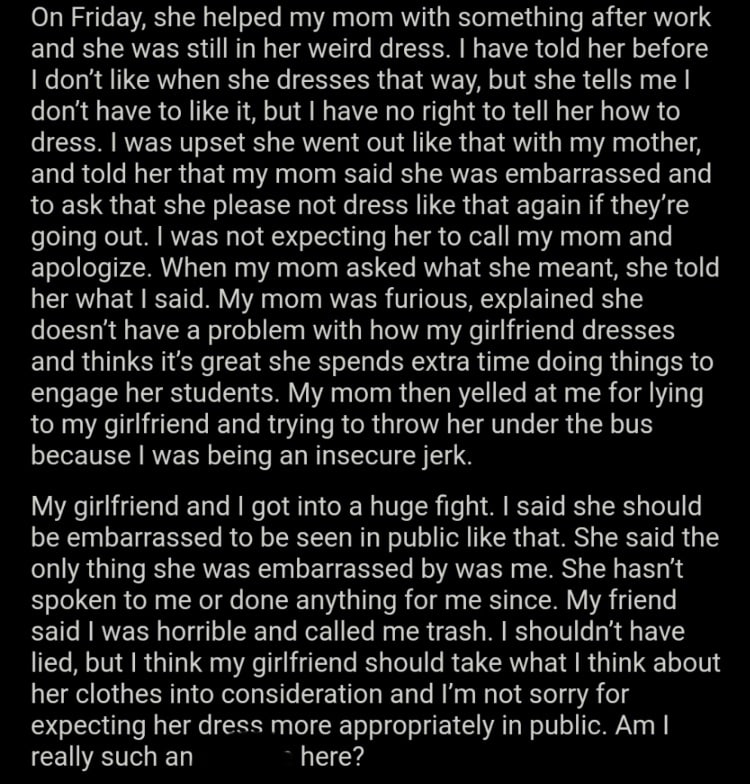 However, tensions began to rise when the girlfriend went out with his mother while dressed in one of her school outfits. To avoid taking the heat, the man told his girlfriend that his mom was embarrassed to be seen with her when she dresses that way and to never wear her school clothes with his mom again. At the moment, his white lie seemed to work, but was exposed when his girlfriend called his mother to apologize.

When the girlfriend called her boyfriend’s mother to apologize, his mom was confused because she had no problem with the way she dresses and loves how she spends extra time to engage her students. Now, not only is the man in trouble with his girlfriend but also his mother, which led to a harsh scolding from his mom.

This fiasco led the couple to get into a huge fight where the man continued to say that she should be embarrassed to be seen in public like that, but she said she was only embarrassed by her boyfriend’s behavior. The man claims that since their fight, his girlfriend “hasn’t spoken to [him] or done anything for [him].” Although he is not sorry for “expecting her to dress more appropriately,” his best friend thinks he is “trash” for the way he acted.

Eventually, the girlfriend broke up with the man as she said he is “too controlling and narrow minded.”

On Reddit, the majority of comments are lecturing the man on his mistreatment of his girlfriend. 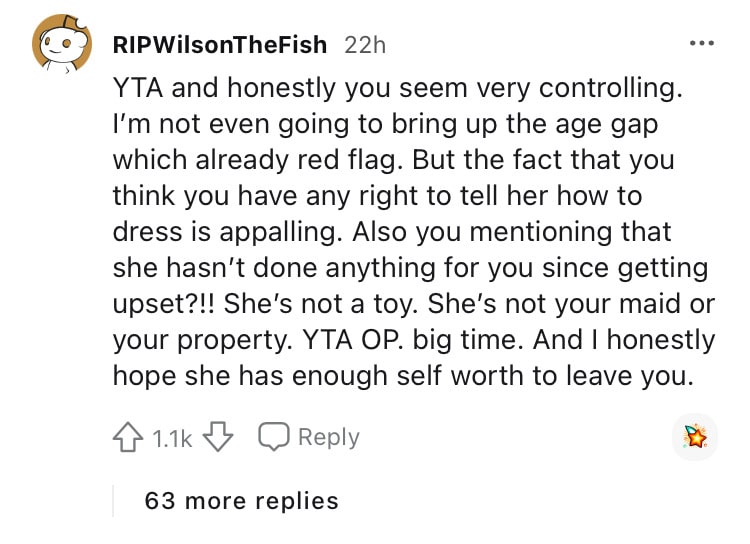 Most people on Twitter are saying that the man is ungrateful for the chance to date someone like Ms. Frizzle. 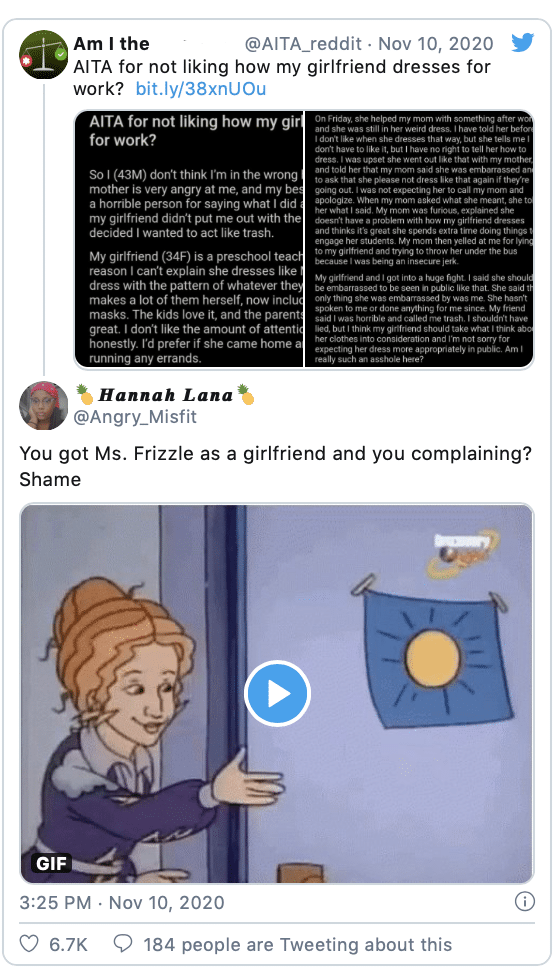 Some Twitter users are declaring they want to take the man’s ex-girlfriend. 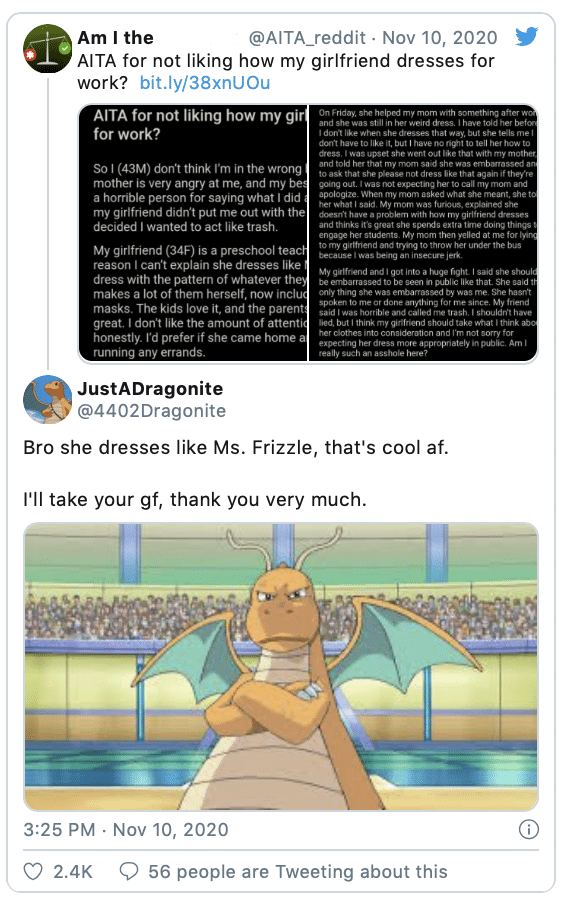 Others are saying that they would love to dress like Ms. Frizzle everyday if their wardrobe “was that exquisite.”

Right? I would genuinely dress like Ms. Frizzle every day if my wardrobe was that exquisite.

This conversation has led teachers to share their Ms. Frizzle-like dresses that they wear everyday in the classroom – just like the girlfriend.

Those who are not teachers are dressing up like Ms. Frizzle to support the girlfriend. 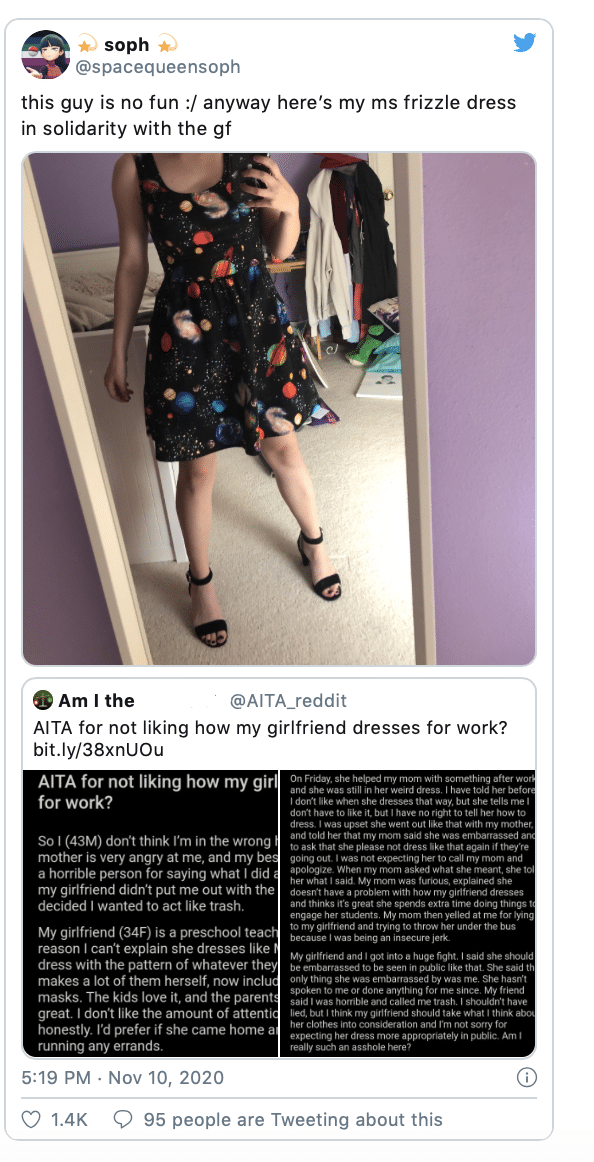 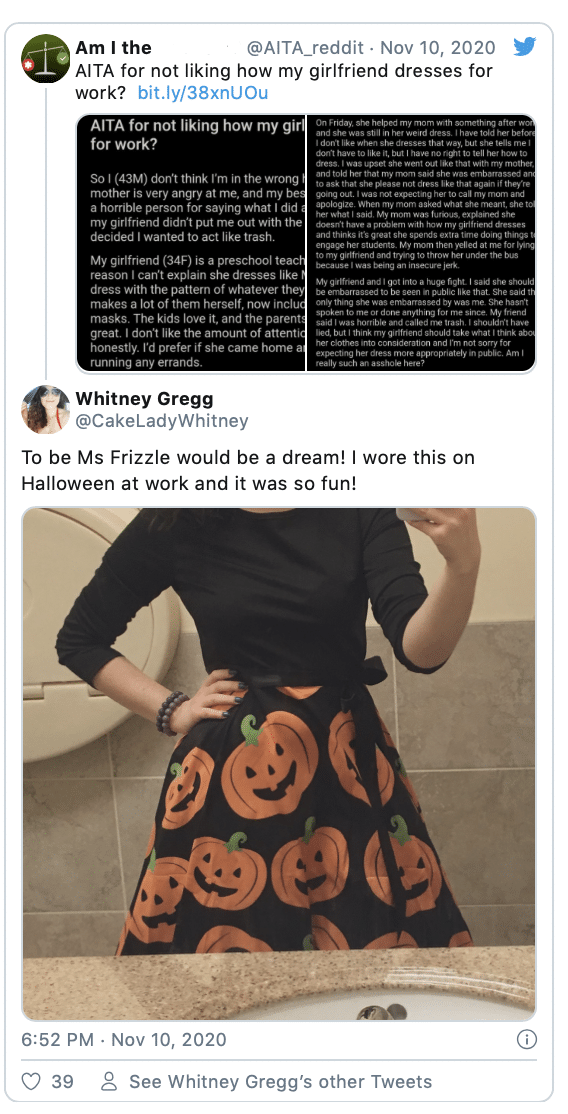 "So my girlfriend dresses like Ms. Frizzle and….I love it.” pic.twitter.com/7tM7jdho2O

Ms. Frizzle has always been an icon in the education realm as she motivates students to want to learn.

Is it so bad to want to bring Ms. Frizzle to life in the classroom?