This is fun, right? When you see huge creeps getting their just desserts? And I ain’t talking no pies! Sorry, pie fans! I’m talking about good old fashioned pummelings. That’s exactly what happened to this man in Brazil who threatened a woman with a concealed weapon he claimed was a gun. Unfortunately for the man — and fortunately for the situation, the woman that he attempted to rob was Polyana Viana.

Reportedly the man approached Polyana as she was waiting for an Uber outside her house in Rio de Janero, Brazil and asked her for the time. Then, as Polyana explains it, as quoted on MMA Junkie: “He asked me the time, I said it, and I saw he wasn’t going to leave”.

Things then turned ugly as the man threatened Polyana’s life for he things she had on her. According to Viana: “He said, ‘Give me the phone. Don’t try to react, because I’m armed.’ Then he put his hand over [a gun], but I realized it was too soft.” The pummelings then begun in earnest.

Said Viana, “He was really close to me. So I thought, ‘If it’s a gun, he won’t have time to draw it.’ So I stood up. I threw two punches and a kick. He fell, then I caught him in a rear-naked choke. Then I sat him down in the same place we were before and said, ‘Now we’ll wait for the police.”. I mean, that’s satisfying, right? Good job, Viana.

Added Viana: “I was fine,” Viana said. “I was fine because he didn’t even react after. Since he took the punches very quickly, I think he was scared. So he didn’t react anymore. He told me to let him go, like ‘I just asked for the time.’ I said, ‘Asked for the time my ass,’ because he saw I was very angry. I said I wouldn’t let go and that I was going to call the police. He said, ‘Call the police, then’ because he was scared I was going to beat him up more.”

Criminals are a superstitious and cowardly lot, but as long as we have the Batmen of our reality, aka MMA fighters, I think we’ll be completely safe. Probably… the guy looked rough. I don’t think you should mug people, in my opinion. 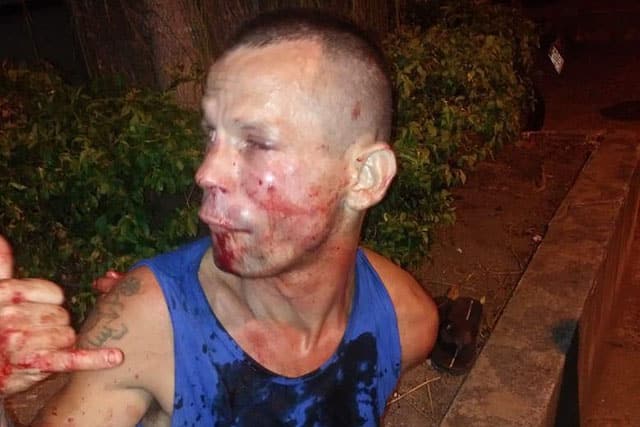 What do you think of Viana Polyana’s beat down of a mugger? Let us know in the comments or on Twitter at @WhatsTrending.