Habit Salon has been receiving a huge backlash due to multiple videos showing the Salon being maskless. The Los Angeles and Arizona based hair salons owned by Chrissy Rasmusszen had been gaining popularity on TikTok. 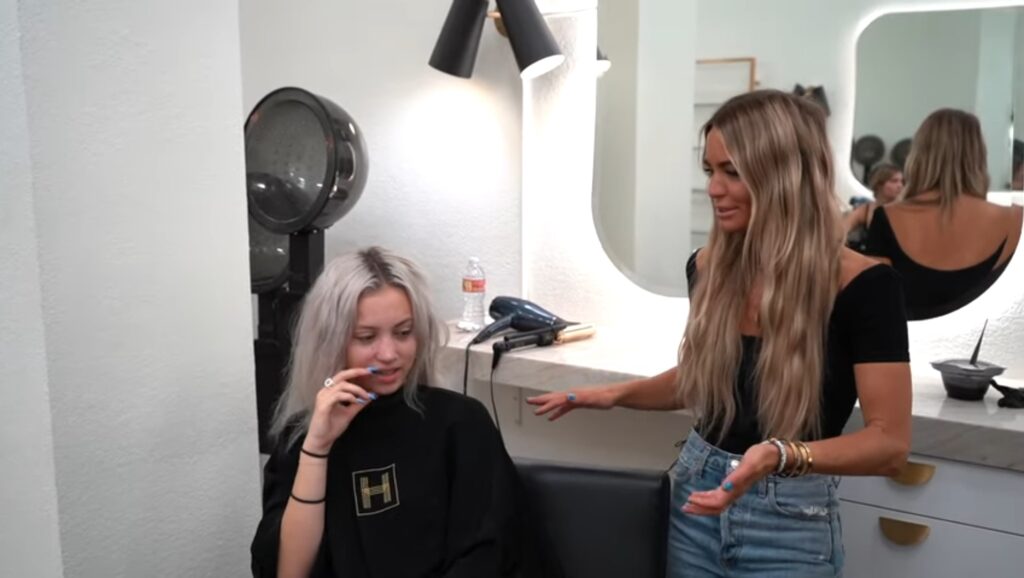 (Snapshot from YouTube video How Riley Hubtaka Gets Her Silver Hair)

The salon is known for doing the hair of e-celebrities like YouTuber Rosanna Pansino and TikTok stars Dixie D’amelio, Avani and Cynthia Parker.  These hairstylists have also ventured to the houses of some stars like the Hype House and the Not a Content House. The salon’s Hair By Chrissy account alone has garnered over 1.5 million followers.  However, hair did not seem to be the main thing viewers focused on in these videos. It was another factor altogether. Or to be more precise, it was the lack of an item the viewers focused on.

In almost all of Habit Salon’s videos, there is not a single person in sight wearing a mask.  Los Angeles and Gilbert are both areas that have required mask mandates. In Los Angeles alone, businesses can receive anywhere from a $100 to $500 fine from the police if the business is found not complying with the mask mandate, according to the website CalMatters.  Habit Salon, however, doesn’t seem to think the mandate, nor the fines for breaking the mandate, apply to them.  This has upset and confused viewers, who have started to critique the salon in different ways. Some have shown themselves filling out L.A. Public Health Complaint Forms, others have left comments on her pages, and some Tweeting to the governor of California, Gavin Newsom, about Chrissy not abiding by the mandate. Question why does Hair by Chrissy not have to adhere to mask rules for employees or clients?” A Twitter user asked “They have so many people traveling in too, the cross spread could be catastrophic”

Question why does Hair by Chrissy not have to adhere to mask rules? For employees or clients. They have so many people traveling in too, the cross spread could be catastrophic

Upset viewers did not stop there. Social media users took to Yelp and Google reviews to leave Hair by Chrissy horrible reviews. “This used to be my hair salon but after seeing them refuse to wear masks even during the peak of COVID in Arizona, I will never go back,” one user stated, “please don’t support a business like this. It’s not hard to wear a mask. Save lives. I used to go to Caroline Benson at Habit and was so shocked and disappointed to see her refusing to wear one as well. Do better Habit.”

The critics on google reviews also have changed Habit Salon’s service into a public restroom.

The salon being maskless is only one facet of the controversy Habit Salon has been facing. Others have commented on Hair By Chrissy’s lack of diversity in her videos. When scrolling through her TikTok and Instagram feeds, there seems to be a lack of people of color.  In reviews from a couple of months ago, it’s also said her team has stated that they are unable to work with “ethnic” hair.  One reviewer stated, “this salon DOES NOT service WOMEN OF COLOR!” “And when asked on multiple occasions to bring diversity to their salon THEY BLOCKED THE PEOPLE WHO ASKED! Please book elsewhere!” 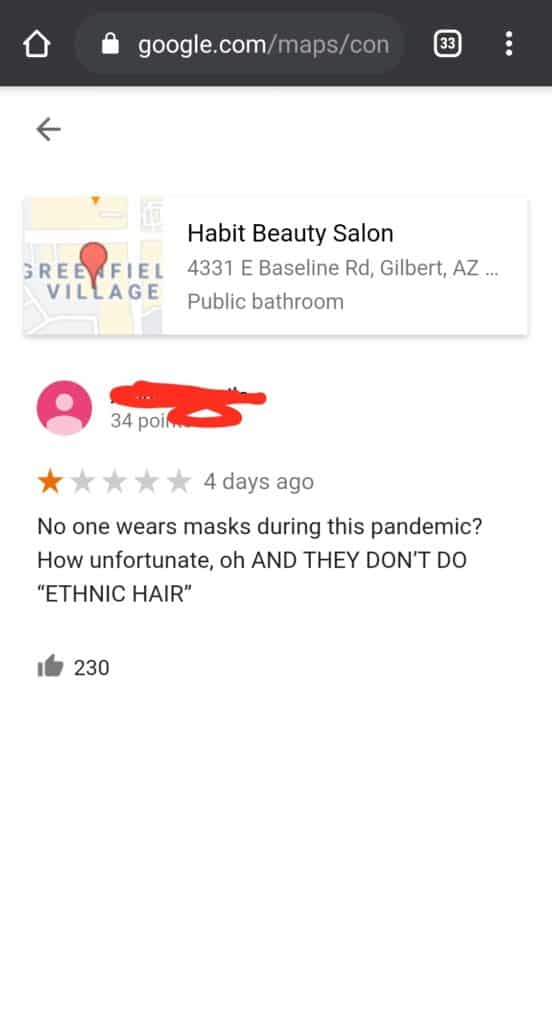 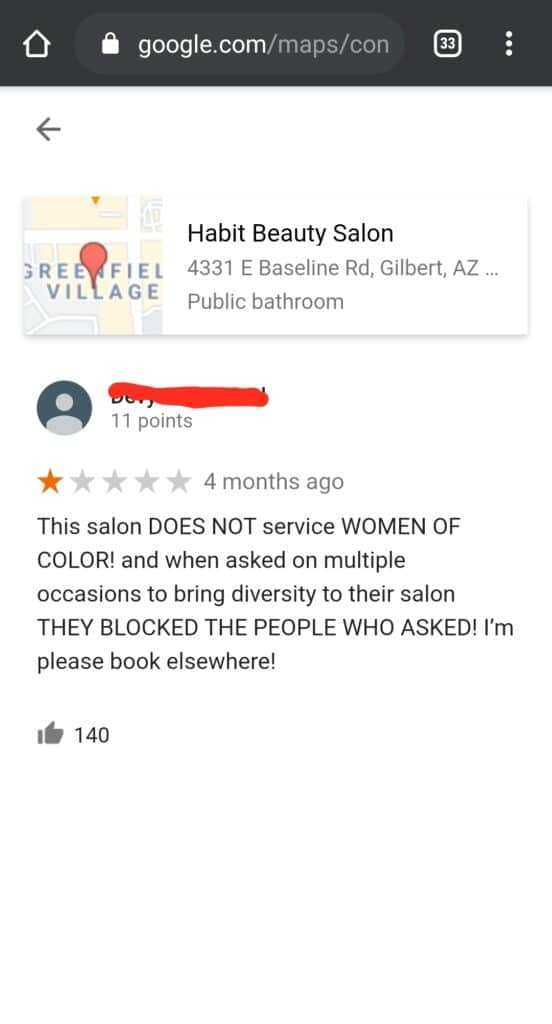 Hair by Chrissy has turned off all comments on her Instagram and TikTok page, a fact many of her critics of late have noticed. Most social media users have criticized her reaction as she has not apologized for her actions, trying to defend herself instead. A post that she added to her story, which was originally from a close friend, stated this: “Here’s the deal.  Chrissy is the type of human that gets you a gift on her own birthday.  she is the most kind hearted human you’ll ever meet in your entire life, and she raised the sweetest kids I’ve ever known.  the people that are giving her hate are the people that need a chrissy in their life.  love you to the moon.”

Although some have stuck up for her, most still continue to call out her actions.  One Twitter user stated “guys to be honest, Hair by Chrissy didn’t have to do this they did this for themselves and now they can’t handle the truth.  Just wear a mask folks it’s just a piece of cloth trust me you won’t die and please just treat everyone nicely if you want your career back.”  Another user stated “hair by chrissy getting dragged needed to happen.”

guys tbh hair by chrissy didnt have to do this they did this for themselves and now they cant handle the truth just wear a mask folks its just piece of cloth trust me u wont die and please just treat everyone nicely if u want ur career back!!!!!!

hair by chrissy getting dragged needed to happen.

One TikTok user explains their issues with Habit Salon, citing the lack of masks as being their biggest issues.

sorry for another one of these on tiktok, but issues I have with this company (these are my OPINIONS) @hairby_chrissy #Boo #hair #mask