TikTok is a powerful platform as the app can transform an average person into a celebrity overnight, and this is exactly what happened to high school football star Caden Woodall.

Who Is Caden Woodall?

Just a couple weeks ago, Woodall was an average high school student at Stevenson High School in Michigan who committed to play football for Harvard next year.

However, his life changed when the school sports videographer @rawrits.alex posted a video on TikTok of the football team dancing and lip syncing to the 2010 bop ‘Eenie Meenie’ by Justin Bieber and Sean Kingston.

In the video, Woodall – aka #7 – is seen lip syncing at the beginning of the video while dancing towards his teammates in the locker room. Then, the rest of the team goes in for the chorus and starts jumping around Woodall – breaking into a dance party. Overall, the video brings good vibes during a time where many are not able to create these fun memories with their friends.

Originally, TikTok took the video down, but Rawr reposted the TikTok, and now the video has over 26 million views.

At first, no one knew Woodall’s name, so he became known by his jersey number, #7. In the comments, many are declaring their love for #7 and even comparing him to a modern Troy Bolton.

Those who love this video probably have ‘For You Pages’ with reactions and similar videos to this one as they have entered “#7 TikTok.”

Girls are mostly watching the video over and over again to admire Woodall’s good looks.

While the boys are hyping up Woodall’s impressive football stats.

Since the video has gone viral, Woodall and the football team worked with Rawr on another video where they lip sync to ‘Escape (The Piña Colada Song)’ by Rupert Holmes, which has received almost 10 million views.

I’m really just here to film music videos of them

However, Stevenson High School was not too pleased with the recognition the video and the football team was getting as the team is not seen wearing masks or social distancing, leading Rawr to be banned from posting school sports videos. Initially, Rawr thought she was going to be fired from being the school sports videographer and forced to take down the viral video, but later it was determined that she would keep her job and the video after she went over guidelines with the school for future videos. 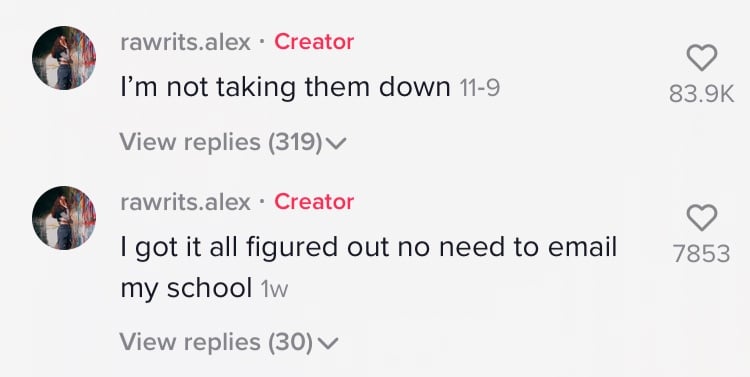 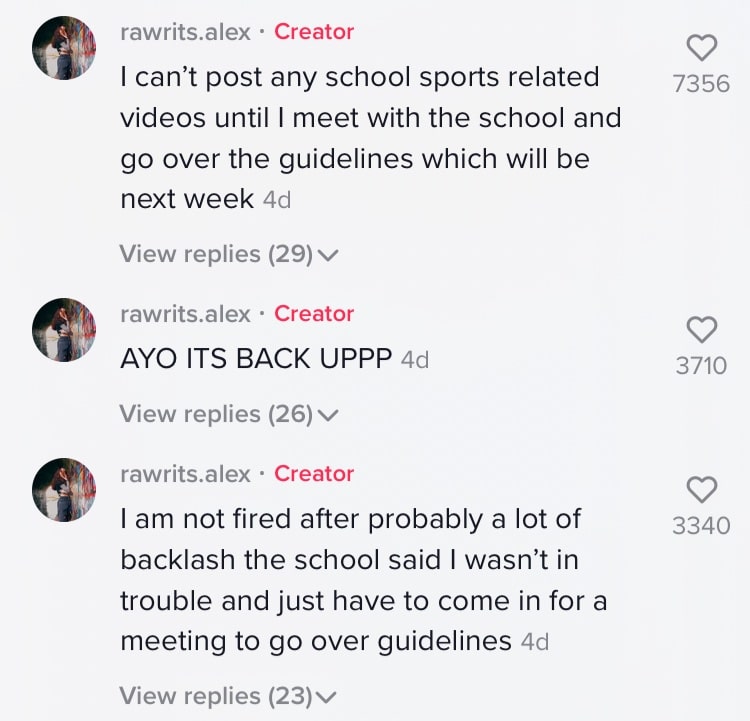 Though the school may not appreciate Rawr’s work, everyone else does, even the Detroit Lions who commented they will try to get Rawr on their field next year. 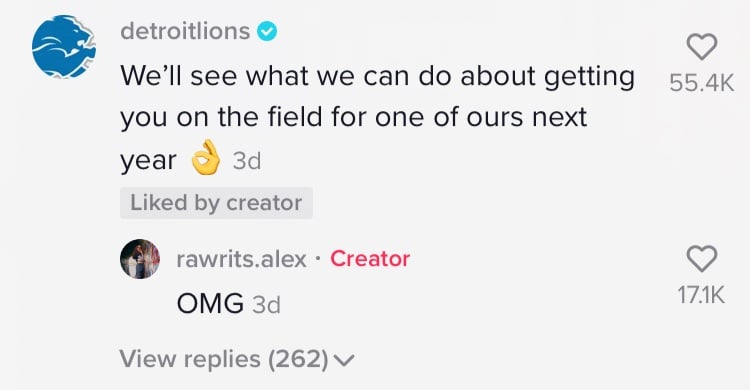 Because Woodall has been receiving most of the hype, he decided to make his own TikTok account, that gained over 1 million followers in under 48 hours.

As his TikTok debut, Woodall drove a golf cart with his friends and recreated the video that originally got him famous. This TikTok currently has over 37 million views.

To mix things up, Woodall recently posted a second video where he and his teammates lip sync and dance to ‘Ain’t No Mountain High Enough’ by Marvin Gaye and Tami Terrell; however, this video is filmed at a house, not the locker room. Woodall’s second video currently has over 10 million views.

Rawr also released a behind-the-scenes look at the making of the second video, which has over 8 million views.

Woodall’s instant fame has many comparing him to Charli D’amelio – who is the most followed person on TikTok with over 100 million followers – and predicting he will imitate Charli’s success.

But with TikTok fame comes some hate as one former Stevenson High School student claims that the football team is “rude, disrespectful, and immature.”

However, in the comments, people were quick to defend Woodall as there have been others who know Woodall personally and described him as a nice guy, even his ex-girlfriend.

#duet with @kendall.conley #greenscreen had to post this for my famous friend😱 Go get him ladies #harvardcommit #7 #exy #SUPERSTAR @cadenwoodall tbc

Now, jumping up and down to ‘Eenie Meenie’ is a trend as many prominent TikTok accounts have recreated Woodall’s video including the Sway Boys, Barstool Sports, and the Detroit Lions.

Woodall has also been interviewed by Overtime where he reveals that he is still single as he is focusing on football and school.

Because Woodall has gained fame so quickly, it seems that this is just the beginning of his social media career and it will be interesting to see where it goes.

Are you obsessed with #7 like everyone else? What song do you want to see the Stevenson High School football team dance to next?