Millie Bobby Brown feels disrespected after a scary fan encounter. Brown broke down in tears during an Instagram video that was posted on her story on Monday.

The 16-year-old explains how a fan approached her asking if she can take a video of her as she was doing her Christmas shopping. Brown said no but her fan didn’t take no for an answer.

“I just went shopping with my mum for Christmas and a girl came up to me and asked if I was… whoever.. and I said, ‘Yes.’ She said, ‘Can I take a video of you?’ I said, ‘No,’” Brown explained as she gets emotional. “Why would anyone want to be taken a video of?”

She was thrown off from the fact that her fan just wanted a video of Brown herself and not both of them. “Of me? It’s not like of the both of us. Of me. I don’t need to justify it to anyone. If I don’t want to be taken a video of, I don’t have to be.” Brown goes on about why someone would want a video of only her and not a selfie like most fans do with celebrities.

Brown continued explaining the encounter, “I was paying and she walked past me and began to video me again and I said, ‘I’m a human being, what more can I ask from you?’ I asked her and she said, ‘So I can’t take a video of a human being?’ I said, ‘No, not when I’ve said no!’”

The encounter made Brown upset about how people don’t respect her boundaries. “It just makes me upset when people push the boundaries and I just wish people were more respectful… I’m still trying to navigate this all and it’s still overwhelming. I will take a picture with you, but when you push the boundary and try and fight me on it… I have my rights to say no. I’m making this video to say have to show more respect for others.”

Brown stood up for herself and has the right to decline having her pictures or videos taken. She begs for respect from fans when setting boundaries and saying no. This includes anyone no matter who they are or what they do. After posting the video, she deleted her TikTok account.

Brown later returned to Instagram confirming she’s doing better but was emotional and uncomfortable at the time.

Fans on Twitter were heartbroken by Brown’s video explaining the encounter. Twitter users say she doesn’t deserve this and should respect her along with others.

This Video is Heartbreaking…💔😢🤬 #MillieBobbyBrown

Millie doesn't deserve to be treated like that. SHE IS ONLY 16 YEARS OLD!!

Famous People are not obliged to do what you want, some people need to learn to be more respectful. pic.twitter.com/oThRNg3yoB

Respect people's boundaries w/o questioning/asking "why not" if they tell you no…famous or not. Lose this sense of entitlement or that these celebrities owe fans every moment at of their time

Someone commented on how people should put themselves in her shoes. Celebrities don’t stop being a human being and have busy lives like others.

As if they have no right to refuse. They should just smile and nod their heads whenever asked! We all go through tough times and wanna be left alone. Ist that hard to show empathy and be more understandable? That was rude. U asked, she politely said no so why would you do it then

Aside from the store encounter, people were also bullying Brown because she was using an Android phone. Does it matter what phone you use?

She has also been called homophobic by people for no reason. All the bullying occurred in two of her social media platforms already.

Twitter user quote tweeted “Why do people feel the need to bully a child off not one, but TWO social media platforms just because they feel like it?…” User included one of Brown’s post that reads “Realizing that surrounding yourself with positivity is the happiest way of living! No hate and only love remember to be kind…THANK YOU X”

why do people feel the need to bully a child off not one, but TWO social media platforms just because they feel like it? fuck you if you still make homophobic millie bobby brown memes even after she said that it severely worsened her mental health SEVERAL times. fuck you. pic.twitter.com/c8cKFmhCgS

Millie Bobby Brown is NOT homophobic. and y’all bullied her for having a phone.. literally a phone. What the actual fuck is wrong with y’all.
1. She’s making 💰
2. Androids > iPhones
3. Why does it bother you what type of phone another person has?? pls get a life

A people can relate with Brown about wanting space. Someone commented that even famous/ rich people still have feelings.

this is what the internet did to millie bobby brown,hope u are happy! pic.twitter.com/er9HXtu4pJ

Yes she's rich but even rich people have anxiety or are unhappy. Her feelings shouldn't be any less valid

Brown became famous by her role as Eleven from the Netflix series Stranger Things. She has been in the industry since she was 10 years old and grew her fame at 12 years old. Brown has actually spoke out about how being in the spotlight isn’t easy. She opened up about it on Instagram back in February.

Brown wrote a paragraph, “16 has felt like a long time coming. i feel like change needs to happen for not only this generation but the next. our world needs kindness and support in order for us children to grow and succeed. the last few years haven’t been easy, I’ll admit that. there are moments i get frustrated from the inaccuracy, inappropriate comments, sexualization, and unnecessary insults that ultimately have resulted in pain and insecurity for me. but not ever will i be defeated. ill continue doing what i love and spreading the message in order to make change.” 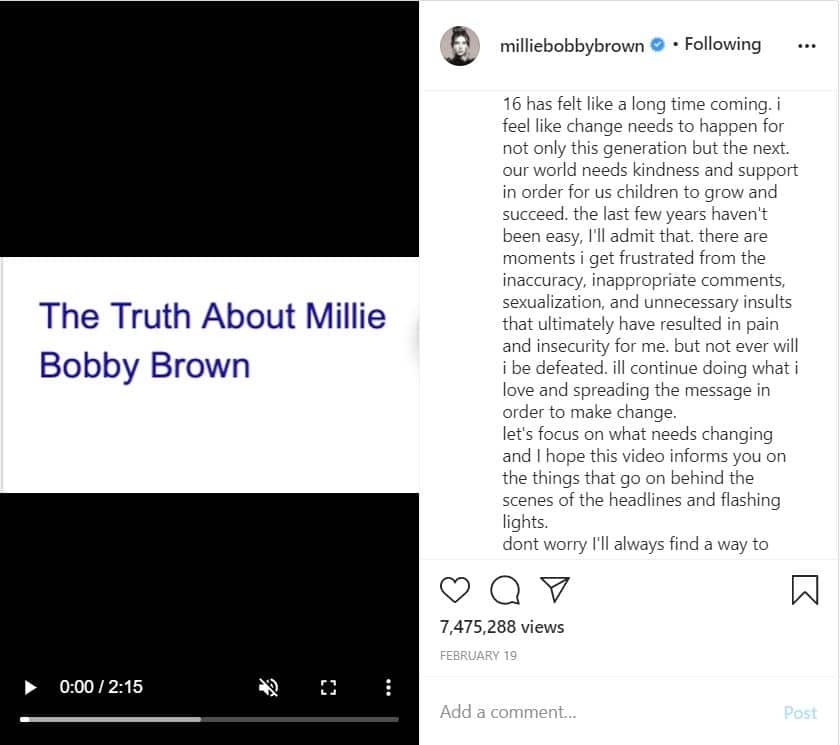 Brown has had other roles in movies like Elona Holmes, Intruders, Once Upon a Time in Wonderland, Godzilla, and more. In addition, she was featured in the Time 100 list as one of the most influential people in 2018. Also being the youngest person as a UNICEF Goodwill Ambassador.

People describe Brown as unproblematic, successful, and brave. As some want to see her fail, others  look up to her.

millie bobby brown is one of the bravest and strongest girls i know, she has been through so much since she was 12 yo and she's still the kindest person in the world, she deserves all the respect and happiness pic.twitter.com/XdesBuTIsF

anyway millie bobby brown is cooler and more successful than you’ll ever be pic.twitter.com/on8GEK0hds