In an emotional Twitter message, Conor McGergor announced his retirement from fighting and thanked his friends. Posting a picture of himself with his mother, the MMA fighter wrote: “Hey guys I’ve decided to retire from fighting. Thank you all for the amazing memories!” 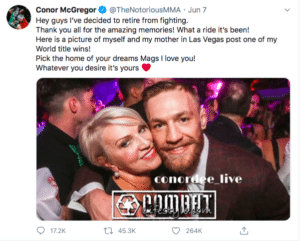 McGergor’s last appearance in the octagon was this January, when, following a 15 month absence, he knocked out Donald “Cowboy” Cerrone within 40 seconds. Only hours before the announcement, Brazilian fighter Anderson Silva had declared his intention to fight McGregor, saying he had already begun to cut his weight.

In April 2016, McGregor announced his retirement with the famous tweet: “I have decided to retire young. Thanks for the cheese. Catch ya’s later.”

I have decided to retire young.
Thanks for the cheese.
Catch ya's later.

It remains unclear if his retirement will stick this time. However, on Sunday, the two-division Ultimate Fighting Championship (UFC) World Champion spoke to ESPN saying “I’m a bit bored of the game. I’m just not excited about the game. I don’t know if it’s no crowd. I don’t know what it is. There’s just no buzz for me.”

UFC president Dana White claims not to have been aware of McGregor’s decision in advance but was quoted by the BBC saying  “One of my people grabbed me and showed it to me on social media – that’s Conor. You know how Conor works and that’s how he does things.” White added ““Conor McGregor’s not going to need some money any time soon. He loves the fight, he’s passionate about it and he has an incredible fighter IQ. But whatever his reason is, when you say you want to retire, don’t worry about it. Do your thing, man.”