“The Real Housewives of Salt Lake City” is causing a lot of commotion online. It’s only been a couple of weeks since the show was released and already we’ve got some great, cringey lines like “This rose is ready to handle a little prick.” and  “You can never have enough wealth and you can never have enough sex”. There’s also a woman who married her step-grandfather, and another who doesn’t really understand how the human body works and has a house that looks like the hotel from “The Shining”. The already iconic show did get into a bit of hot water lately though.

A lot of Mormons, particularly Mormon influencers, were not happy with Bravo’s  “The Real Housewives of Salt Lake City.” Many of the top influencers on Instagram, and some of the top mommy bloggers online are practicing Mormons, and when the new franchise was announced, a lot of people assumed some of the top Utah bloggers would be cast as Housewives. There was a lot of speculation in particular about fashion influencer Rachel Parcell being on the show. Many were hoping for her to be cast, but alas, she was not. Judging from the casting, it  seems Bravo purposely selected women who are not Mormons, or are former members of the of the Church of Jesus Christ of Latter-day Saints, or consider themselves “Mormon 2.0,”(which basically means they don’t adhere to all Mormon rules). It makes sense that they would cast for the show this way, since a large part of the appeal of Real Housewives is the dramatic fights, which would be difficult to instigate if everyone in the show was sober.

Prior to the show’s premiere it was very heavily advertised on Social Media. But the show also got a lot of negative attention particularly from Mormon influencers, who were unhappy with how their religion was discussed and treated on the show.

After the show premiered last Wednesday, a various Utah-based Mormon influencers began to post expressing their unhappiness with the show’s depiction of the Mormon religion and the  state of Utah. 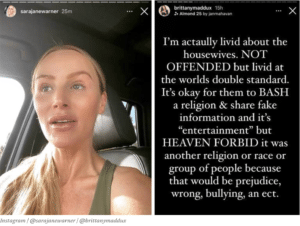 The main complaint that many seemed to have was that the show portrayed Utah/Mormon culture as fake and materialistic. There was also a line about a  “darkness” brewing underneath Salt Lake City’s perfection that many took issue with.

Who else was involved in the controversy?

Emily Jackson, Rachel Parcell’s sister, also received backlash related to the show’s content. Jackson was put in a rather awkward and messy situation, as she had partnered with Bravo for the premiere. She posted an Instagram Reels video about the show, and, since she was contractually obligated to promote the show (very likely in a positive light regardless of her opinion of the show), her review was mostly positive. This drew a lot of criticism, particularly from other Mormons, who chastised her for advertising a show that they felt had  portrayed their faith in a false and negative light. 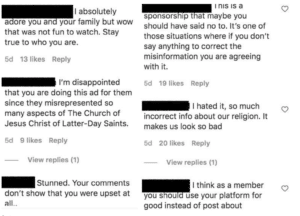 Emily later explained that she had wanted to keep the review light, and defended her stance on the show. Emily’s sister Rachel (who you’ll remember many wanted and expected to be on the show) also posted a review of the show, and mostly agreed with Emily’s analysis.

It is understandable that their religion is really important to them, and they are allowed to criticize a TV show on social media if they feel it misrepresents their faith. Whether you agree with their assessment of the show or not, it is definitely interesting to get this kind of insight into the Mormon influencer world that we so rarely get to see, since they do not always discuss their religious beliefs in detail.

What do you think, was the backlash warranted?