The mysterious monolith has disappeared from the Utah desert. It is tall and made out of shining silver metal. The monolith appeared last week in Utah by officers from the Utah Department of Public Safety’s Aero Bureau. People were amazed and came up with conspiracy theories of aliens placing it there. It caught hikers attention which the secret location was later revealed. People have been going to see the mysterious monolith that was “placed by aliens” and it has now disappeared.

The state’s Bureau of Land Management confirmed on Saturday that the monolith has disappeared on Facebook.

“Here is our official statement on the rumors surrounding the “#Monolith:” We have received credible reports that the illegally installed structure, referred to as the “monolith” has been removed from Bureau of Land Management (BLM) public lands by an unknown party,” the post said. “The BLM did not remove the structure which is considered private property. We do not investigate crimes involving private property which are handled by the local sheriff’s office. The structure has received international and national attention and we received reports that a person or group removed it on the evening of Nov. 27.” 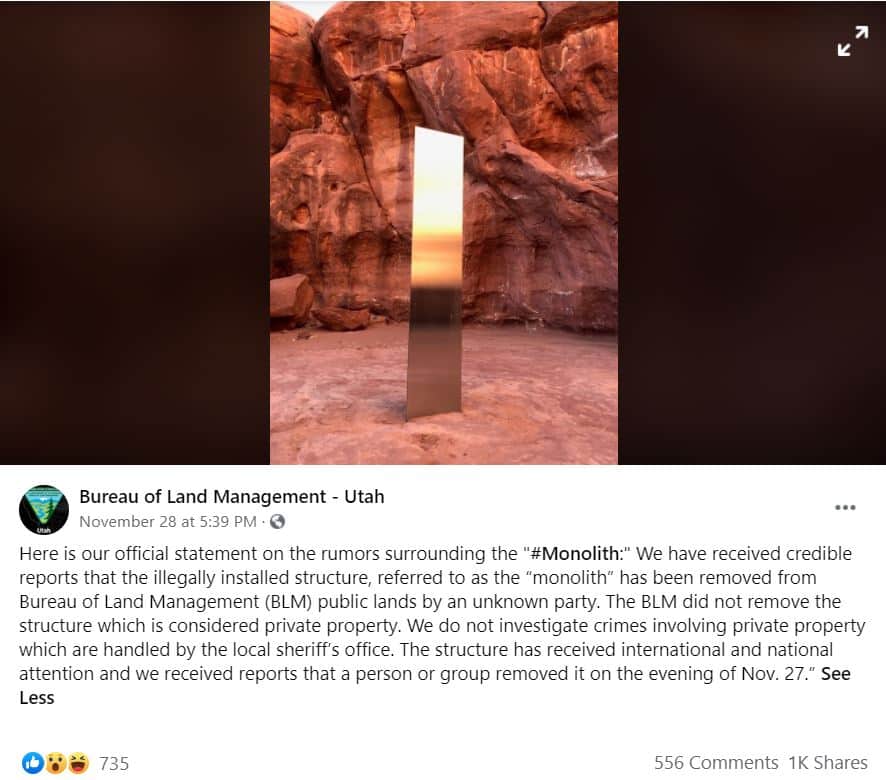 The post continued, “The structure is the “private property,” the lands it was installed on are public lands managed by the BLM.”

Updates of the monolith can be seen on their Facebook page.

Where is the monolith located?

To begin with, authorities didn’t want to disclose the location of the monolith. CNN reported that authorities “didn’t want curiosity seekers to become stranded in the remote landscape and need to be rescued.”

This didn’t stop people. There was no way to prevent people from seeking and revealing the location which is in a redrock slot canyon south of Moab.

Where did the monolith disappear to?

After the disappearance of the monolith in Utah, there has been a new monolith located in Europe. Looks like these aliens go internationally.

The monolith came to Utah and was like, “this is NOT the place.” ✌🏼

Late last week, a tall shining silver metal was spotted in Romania. It was not far from the city Piatra Neamt, spotted on a hill called Boatca Doamnei.

The monolith in Romania is similar to the one in Utah. They are both tall and silver but the only difference is that the one in Romania has squiggles. Not to mention, it is also a bit slanted on the top.

Utah's monolith has visible screws and seams, Romania's looks like a sad art project with awful welding skills and some sort of texture clearly made with a sander typically seen on every apartment door in Bushwick. Aliens, please improve your buffering technique. Score 👽👽⚪⚪⚪ pic.twitter.com/SloeLr4YQJ

Just like Utah, Romania doesn’t know how the monolith was placed there since it’s at private property. It could be a prank or it could be an art piece. Who knows?

Selfies from my recent trip to Utah and Romania. pic.twitter.com/QUWT52wbxB

How did the monolith disappear?

I have a pretty good idea who might have stolen our cool silver monolith in Southern Utah. 😢😡 pic.twitter.com/doXAD8UPXg

TikTok user known as adamjthelawyer, states that the monolith was taken down. He mentions how his photographer friend went to see the monolith around 4 p.m. to capture the full moon at that location. His buddy told him that he heard people arriving at the location and he wanted to leave so they can enjoy the monolith.

“Four guys rounded the corner and two of them walked forward,” Adamjthelawyer included a screenshot of what his buddy told him. “They gave a couple of pushes on the monolith and one of them said ‘You better have got your pictures.’ He then gave it a big push, and it went over, leaning to one side. He yelled back to his other friends that they didn’t need the tools. The other guy with him at the monolith then said ‘this is why you don’t leave trash in the desert.’ Then all four of them came up and pushed it almost to the ground on one side, before they decided push it back the other when it then popped out and landed on the ground with a loud bang. They quickly broke it apart and as they were carrying to the wheelbarrow that they had brought one of them looked back at us all and said ‘Leave no trace.'”

Adamjthelawyer includes that this all happened at night around 8:48 pm. People are obviously wondering why his friend didn’t stop them that is because “they were right to take it out.”

Adamjthelawyer’s friend posted on Instagram the photos he captured of the monolith along with the people who knocked it down. 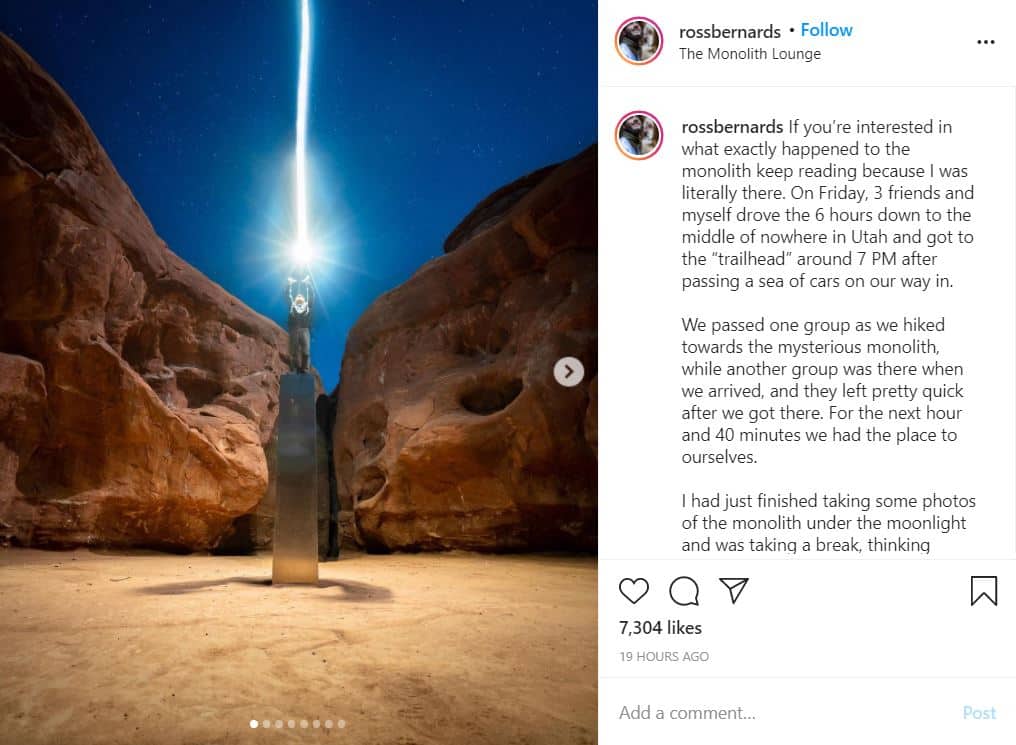 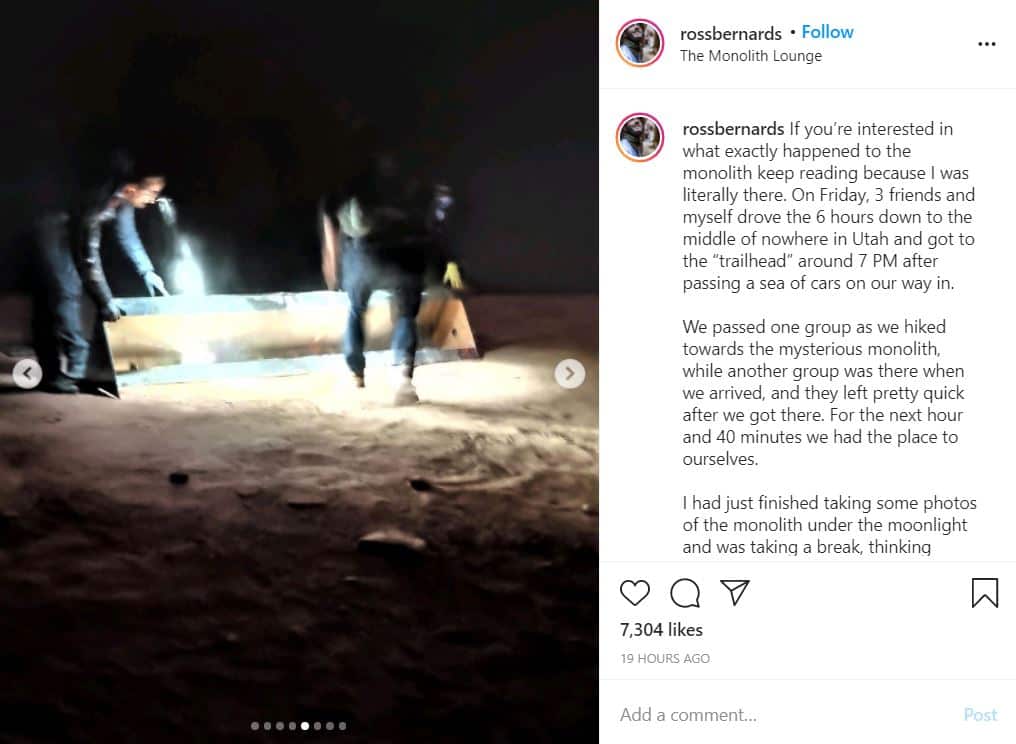 As conspiracy theories are gathering up, it doesn’t help to see a “monster” in the background of a TikTok.

So this is the original video…

… this is the one where it’s cropped in order to see the monster like figure or alien in the background.

Should we be scared……because I think we found what left it there.

You can see in the cropped version a black figure. People are freaked out by the fact that the arms moved.

While some think it’s an alien or monster, others think it’s someone in an alien costume.

There are many questions going through people’s mind at this point, whether it’s “what is that? Where did the monolith go? What is the monolith in Romania? etc.” There are no clear answers to any yet.