Netflix has been a source of entertainment for all of us during this quarantine, so it’s really shocking that now Netflix is the subject of a massive internet scandal and people are saying the streaming platform exploits children.

On August 18th, Netflix began promoting the film ‘Cuties’ and released the official trailer. The French movie is set to debut on Netflix on September 9th, and it’s about Amy, an 11-year old muslim immigrant who joins a dance troupe and begins to explore the world outside of her family’s strict religion and culture. The film won an award at the Sundance Film festival and has been praised by critics.

This all sounds good and normal, an award winning film telling a story of race, femininity and gender roles – however, Netflix did not seem to market this as an uplifting, coming-of-age film. Instead the emphasis was placed on some sexual images of the young actresses.

The original description of the film on Netflix read “Amy, 11, becomes fascinated with a twerking dance crew. Hoping to join them, she starts to explore her femininity, defying her family’s traditions.” The Netflix listing also featured this poster of the young girls in explicit costumes and positions. 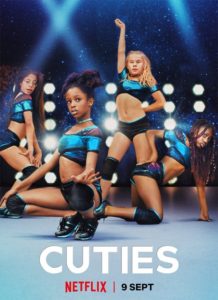 This quickly outraged user online and the power of Twitter came together to demand the film be taken down for endangering minors and sexualizing children. One user tweeted out the poster and said “Netflix, WTF IS THIS” and “This is disgusting. Minors should not be sexualized like this” another tweeted “11 years old?? This is just wrong!! Who are the parents of these children? They are okay with this exploitation?!”

Obviously the sexualization of children is problematic and the people have a right to be outraged! But some online are specifically angry that Netflix seems to center on sexualizing black children. BIPOC are often over-sexualized and fetishized for a white, male audience and people believe Netflix is using their large platform to play into these stereotypes.

One tweeted out “it is so revealing that the first major @netflix original to centre young Black girls hinges on explicitly sexualizing 11 year old children … a sexualized image is too often the price of mainstream success for Black women and girls”.

Several change.org petitions were started from these Twitter critiques to ask Netflix to remove the movie entirely. One petition says that “wants Netflix to remove the new movie as it promotes child pornography!” has gained almost 300 thousand signatures from outraged viewers and parents alike. It turns out this petition did win a small victory. Netflix issued an apology on August 20th and said they were taking down the explicit posters and modifying the description of the film, but they did not agree to remove the film from the platform.

Netflix tweets “we’re deeply sorry for the inappropriate artwork that we used for Cuties. It was not ok, nor was it representative of this French film which won an award at Sundance. We’ve now updated the pictures and description”.

Most people were happy with this announcement and glad the film is being changed, but others online think this negative backlash is hurting the Black filmmaker who created the film to spread an empowering message.

The film was originally created by a black, female director and was made to reflect her own experiences with femininity and identity. When it first came out the movie was praised as being a feminist movie. Twitter users began comparing the original film to the Netflix poster to show how Netflix ruined this film by sexualizing the actors. One tweet reads “the thing about the Netflix campaign for Cuties is how disgustingly sexualized these girls are. Compared the poster and blurb from Netflix vs. IMDB”. 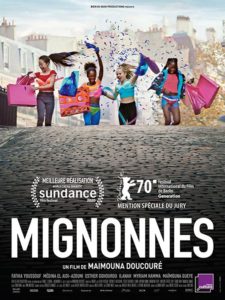 Another tweet replied to a critic saying “It’s from a French black & female director and addresses the issue of the sexualization of girls. It’s just very very very badly marketed by Netflix” and “this is the debut film for the black female director of cuties, the amount of backlash she is getting for something that is Netflix’s fault can ruin her”.

So what do you think, should Netflix ban the film? Is this inappropriate or empowering? Is everyone overreacting to the poster? Let us know in a comment or tweet us @whatstrending!