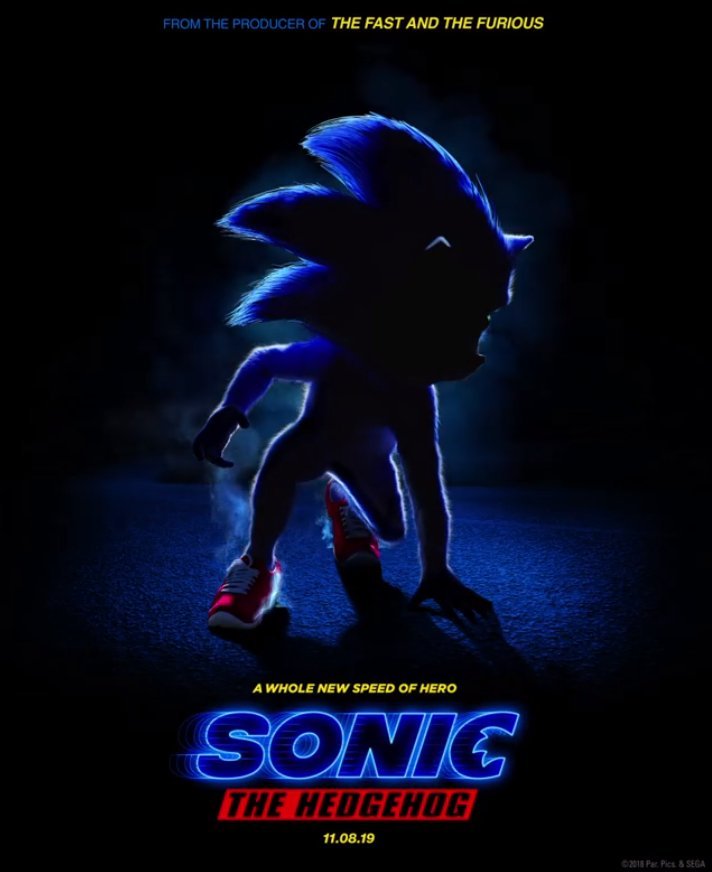 Sonic has went through a lot of iterations. There’s been the child like Sonic the Hedgehog of the original Sega Genesis games. There’s the more anime inspired hedgehog that we’ve seen in Dreamcast’s Sonic Adventure. And now, the upcoming Ben Schwartz voiced Sonic the Hedgehog movie imagines Sonic as he was always apparently meant to look like: a bizarre muscular child. A muscular child with furry spikes whose muscle definition is much too more toned than the once noodle limbed video game hero could ever dream of.

Take a look at the brand new motion poster for Sonic The Hedgehog right here! pic.twitter.com/15n5APqaM0

The internet, long the arbiters of what is or is not freakish, have deemed to the former (freakish!) and the internet is a twitter.

This decision was not seem to have been made lightly, as director Tim Miller of Deadpool fame, tells IGN that this is… well, not an accident.

“That was always Stage 1 of adapting it to what the real world is and what a real animal would be like. It would be weird and it would feel like he was running around nude if he was some sort of otter-like thing. It was always, for us, fur, and we never considered anything different. It’s part of what integrates him into the real world and makes him a real creature.”

i refuse to accept that these two events aren't connected somehow pic.twitter.com/uoirbnKNoA

I don’t know if a real animal has human thighs, but yes this is much better than a cute otter, sure. No one watching a Sonic movie wants to see funny animals, you hit it in the head.

Hell, you haven’t even considered what we’re not seeing. Those eyes! Those accursed eyes! Said Miller:

“I don’t think SEGA was entirely happy with the eye decision, but these sorts of things you go, ‘It’s going to look weird if we don’t do this.’ But everything is a discussion, and that’s kind of the goal, which is to only change what’s necessary and stay true to the rest of it. He’s not going to feel like a Pixar character would because I don’t think that’s the right aesthetic to make it feel like part of our world.”

If you turn up the levels on the Sonic poster image, you can see the details in how they made him more realistic. pic.twitter.com/DpIgotfP2N

Sega released some hellish Sonic products over the years, so if they’re not happy with the eyes, that’s not the best sign, and the fans are starting to suspect, as they have many a time over, that this is not the Sonic product that they’ve dreamed of.

Being a Sonic the Hedgehog fan is tough. It’s a masterclass in masochism. No matter what Sega does to us, and they do a lot, we keep coming back for more. pic.twitter.com/CXsYP2F4Os

I've never been this scared of a movie. I need this to be good, but honestly I'll be happy if it's not. We either get a great movie, or 90+ minutes of new Sonic meme material

On hold with 911, whose phone lines are surely all tied up because, like me, everyone’s calling in to report the SONIC THE HEDGEHOG poster for doing crimes against humanity

This uncanny valley vibe follows in the stead of Pokémon: Detective Pikachu, Disney’s Christopher Robin and the upcoming Lion King remake in imagining that if cartoon characters were in the real world they would be absolutely disgusting. We’ll see if anything changes after Sonic’s buff as hell legs run in the trailer, but it’s so odd. Sonic is already CGI, we know he’s fictional, why not Roger Rabbit the whole thing and let him be his natural cute self next to all of the humans populating this thing? I mean, we can’t let a Progressive ad be the purest representation of the character!

But what do you think of the toned buff blue child? Let us know in the comments or on Twitter at @WhatsTrending.