As election day approaches, people all over America are casting their ballots to voice their opinions on who they think is best fit to lead us out of an economic depression and a global pandemic.

While we wait for the results, anxieties are high as no one truly knows what to expect in a year like 2020.

Because we are all trying to predict the future of America, The New York Times came out with an article to give us some data to help us with our predictions.

The New York Times article revealed a correlation between one’s first name and their preference for the President of the United States.

For two months The New York Times and Siena College teamed up to conduct polls in battleground states to create a database of likely voters and their preferences. From the database, The New York Times was able to put together a table of 102 names to show who most people with each name voted for. 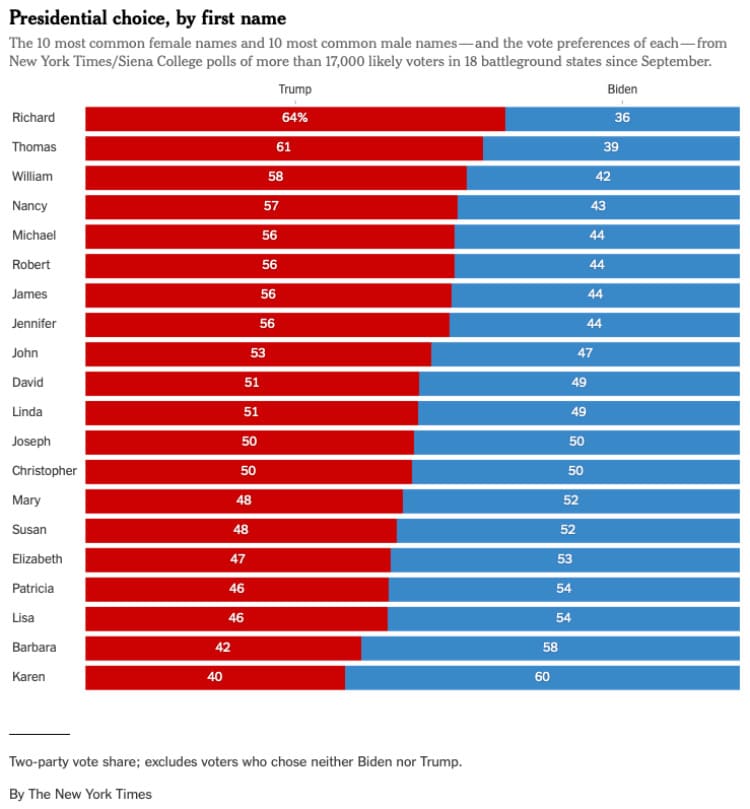 Karens Are No Longer Karens

The name “Karen” has become a pop culture term to describe a white middle-aged woman who exhibits her privilege over others in a dramatic way, and some used to associate “Karens” with Trump supporters. But many were shocked to see that Karens are mostly voting for Biden.

One Twitter user sarcastically commented on the irony of Karens voting for Biden by suggesting this poll was done at the “Karen Rehabilitation Society.”

Was this poll put out by the Karen Rehabilitation Society? https://t.co/mdUWVkA8Kg

Because Karens have been hated on social media, Biden sympathizers are apologizing to the Karens of America as – in the Democrat perspective – Karens are now “sane” for siding with Biden.

Karens have been unfairly maligned and we all owe them an apology. pic.twitter.com/7u3tXCOP3X

OK, we owe an enormous apology to America's Karens, who are Biden +20 https://t.co/3lSt0pDVQK

And Biden supporters are now loving Karens a lot more than President Trump.

Karen's are better than Trump. pic.twitter.com/yOnSmgnZTw

So Who Will Be The New Karens?

The Karens may no longer be Karens – to Biden supporters – but there are some names that are assumed to be the “new Karens.”

Biden supporters are now hating on Jennifers, Nancys, and Barbars as these are the female names that are the most likely to vote for Trump.

A woman named Karen on Twitter is jumping with joy as she is no longer a huge threat and the target switched over to the Jennifers.

I told y'all to be coming for Jennifers, not Karens. https://t.co/UlXbyy58zM

Another Twitter user is claiming she “called it” that Jennifers are more likely to vote for Trump over Biden as they are the “millennial Karens.”

I CALLED IT. I said Jennifers were the millennial Karens back in August and whaddya know Jennifers are more likely to support Trump than Karen’s pic.twitter.com/2UYCEnvfYp

But not all Jennifers agree with their fellow Jennifers’ decisions.

Fellow Jennifers: WHAT IS WRONG WITH YOU.

Unlike Biden supporters, Trump supporters are praising the name Jennifer for voting for the current President.

People are also shocked that Nancys are likely to vote for Trump as Speaker of the House Nancy Pelosi is one of President Trump’s biggest adversaries in Washington D.C.

The Karens are redeeming themselves from 2016. But what’s up with the Nancys? Come through @TeamPelosi and @NancySinatra! pic.twitter.com/ljRCaImikG

Thank God for the Jennifers and Nancys in our lives. Karens can go pound sand. https://t.co/EWqZ7EOR8t

However, Twitter users are not surprised that Barbaras are more likely to vote for President Trump because “Barbara” is typically an older woman’s name.

The Barbara is telling here. Lots of older women with that name… pic.twitter.com/E6VSiIazHT

In social media culture, we mostly call women “Karens” but now Democrats have a name for the male version of a Karen – Richard.

On the chart, it shows that men with the name Richard mostly support Trump leading Biden supporters to call Richards “the male Karens.”

Karens are owed an apology, Richards are the real threat. pic.twitter.com/CRVr65jIYa

Ya’ll hating on Karen’s but you really should have been beating up dudes named Richard pic.twitter.com/xNvvcCo1x6

Ironically, 68% of people named Donald reported that they are voting for their fellow Donald – President Donald Trump.

During this time, both sides of the political spectrum ostracize each other based on political beliefs. Twitter’s reactions to this chart is just another example of how divided America is and how we label our fellow citizens as “bad people” based on their presidential preference. As we approach the end of the election season, let’s remember to treat other with respect and not put labels on others based on who they voted for. At the end of the day, we are all Americans living united in the United States of America.

Do you think The New York Times article was accurate? Are the Jennifers really the new Karens? What are your predictions on who will win the election?