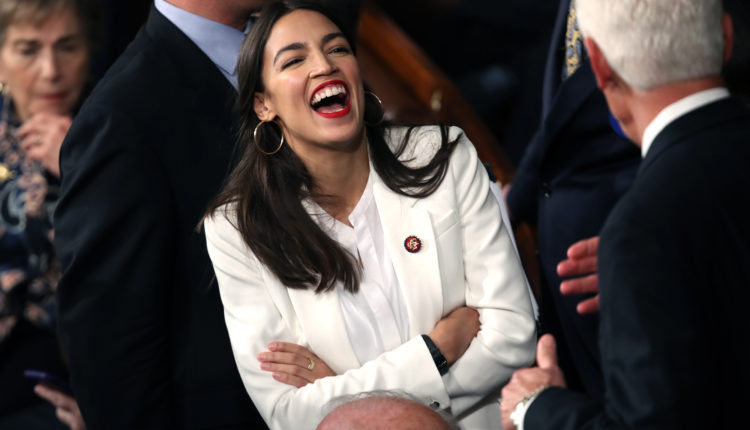 Do you remember only a few months ago, when the GOP demanded we ignore that Kavanaugh in college was an intense boorish, probably sexually assaulting, drunken slob to give him a lifetime appointment on the Supreme Court? When they said that whatever he did in college could never count for the long term? Do you all remember that? Well, that same GOP is now trying to smear Alexandra Ocasio-Cortez, the hyper popular, very much on the ball, representative for New York by finding a video where she uhh… danced. Where she danced the dance from The Breakfast Club in college. It’s all very charming and I have no idea why this would mean to discredit anyone.

I don’t want to give the more toxic sources of this any clips so here’s the clip as posted by @jules_su.

According to Republicans, "bar fights", "sexual assault", and "binge drinking" are common high school activities that should never EVER prevent someone from serving on the Supreme Court.

Meanwhile, DANCING is apparently an immediate disqualifier for @AOC. pic.twitter.com/9N1VQMXrQx

Look. I wondered wether or not to post this at all, but everyone else was already but like– this is creepy, right? We’re not digging up clips of anyone else in their college days who didn’t commit a straight up sex crime (Kavanaugh, folks). But we dug up this. Between this and the whole Liz Warren “unlikeable” thing it seems like people are trying to send a… very creepy message to women. And we’re all lucky Alexandra Ocasio Cortez seems to be well equipped to deal with it.

Also, what is with the implication here? Is dancing and being happy a sign you’re a broken human being? Is the GOP under Trump — or maybe the GOP in general — so depressing, so utterly devoid of anything resembling joy, that seeing a woman do a dance from a movie from the 80’s is the kind of thing that sends them into spasms? The only people who could be offended by this are– as Twitter pointed out — the mayor from Footloose — or one of the aliens from Mars Attacks who knows not what dancing means.

Absolutely devastating to reveal that I would have had a crush on Ocasio-Cortez in college. Certainly this video will destroy her.

Or, movie references aside, probably a cold angry person who thinks joy is illicit because they never allowed themselves to feel any. Here they are, trying to dig up clips to discredit a young woman in congress, and the best they can find is that she was cooler than me in college. Look. You’re jelly. I get it. We all get jelly (which is how young people say jealous). But this is a bummer, right?

Anyway, congrats to Cortez. If this is the best they could find, it’s smooth sailing from here.

What did you think of what the GOP thinks is a bad clip? Let us know in the comments or on Twitter at @WhatsTrending.

Air Marshall Dances His Way Through Directing The Planes

VIDEO: Netflix Begs You Not To Do Birdbox Challenge