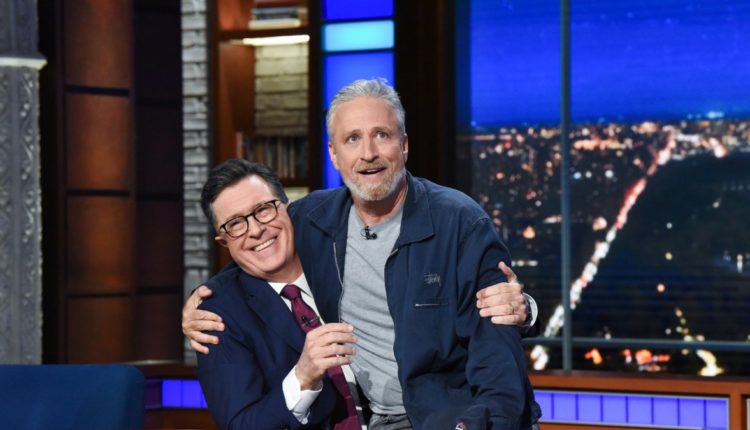 Jon Stewart was a surprise guest last night on the Late Show with Stephen Colbert, where he hilariously responded to criticism from a Republican congressman.

The legendary comedian and retired host of The Daily Show has taken up the cause of 9/11 survivors and first responders, many of whom suffer from health issues caused by that infamous attack. Government funds have been granted for years to support this community, but the funding is set to expire in 2020 – and Congress doesn’t seem to want to fix it.

Last week, Stewart’s impassioned speech to Congress went viral, when he slammed the many congressmen who hadn’t bothered to show up and asked why those who had were still dragging their feet. The clip earned widespread attention and Stewart has been hailed as a hero and a champion of 9/11 victims.

But not everyone saw it that way, apparently. On Monday, Senate leader Mitch McConnell – who Stewart points out “could pass this bill tomorrow” if he wanted – commented in an interview with Fox News that he “doesn’t get why [Stewart] is so bent out of shape,” promising that Congress will get to passing the bill “eventually.”

Stewart’s appearance literally stole the show from Colbert, who played clips of McConnell’s interview to his audience. An indignant Stewart spent the rest of the bit lashing back at the Republican majority leader.

“Wow, I feel like an asshole,” Stewart commented sarcastically, in response to McConnell’s defense that Congress is often “very busy.”

“This is a huge misunderstanding. I didn’t know that they were busy. I didn’t mean to interrupt them with their jobs.”

The celebrity world, along with most everyone else, is firmly on Jon’s side here.

“If you were to take all the arrogance and entitlement and elitism that people don’t like about Hollywood and show business, and you concentrated it in one city, and gave those people actual power, that’s Washington.” Jon Stewart on Mitch McConnell https://t.co/YtpoKB3TzF

What an awful, evil, out of touch, compassionless man.

This makes my blood boil. https://t.co/zvZWYAz09L

Stewart managed to crack a few more lighthearted jokes during his clapback, referencing the surprisingly widespread comparison between Mitch McConnell’s face and that of a turtle. But it’s pretty clear that his emotions are still high and heated on behalf of the people he’s fighting for.

In his words, “I’m bent out of shape for them.”

What do you think of Jon Stewart’s activism and his response to critics? Let us know in the comments!

Coronavirus Cities BEFORE and AFTER Outbreak

10 Things You May Have MISSED In Shane Dawson’s…