Honestly, kind of refreshing to see. 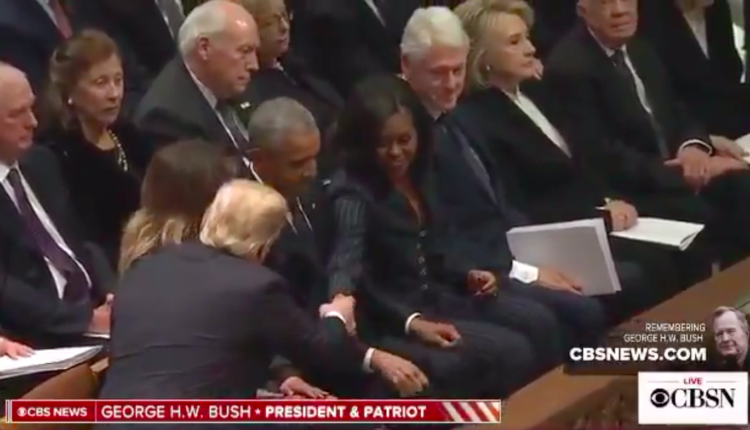 Hillary Clinton does not even so much as glance at the Trumps and it doesn’t escape CBS’s notice pic.twitter.com/zgYQ7du3Ii

The act of being politically polite is so odd — especially to the guy who uhhh… tried to destroy your career with the racist birther movement. But you know, politics is politics I guess, and in a video from George H. W. Bush’s funeral, we can see the former presidents and the first ladies — the Obamas and the Clintons sitting together when Donald Trump and Melania approach. Now of course Donald Trump has had a terribly detrimental effect on the lives of both of these families. From the birther movement, to the acts of the MAGABomber who, inspired by the president’s rhetoric (“Lock Her Up” and calling Hillary the biggest criminal in American history) sent pipe bombs to the homes of both the people sitting to Trump’s left. Michelle Obama even recently discussed how she felt her family’s lives endangered by Trump’s words.

But here we are, with the president approaching the bench. He and Melania shake hands with the Obamas as the Clintons, not escaping the news’ notice, give nary a glance in the president’s direction. Which is actually kind of refreshing to see! I mean, if someone kept implying I was a massive criminal who ran a degenerate sex ring from a pizza place… you know… I just don’t know if I would be happy seeing the damn guy!

Others also noticed how animated Hillary Clinton was before the appearance of the former WWE guest star turned president, and how chilled the vibe in the room became when he entered. Again, refreshing to see. You don’t have to be nice to Trump! He won’t be nice to you! One day you’re nice to Trump, the next day you turn on the TV and you hear that you have been called into court to testify against him to Robert Mueller.

What did you think of this video? Let us know in the comments or on Twitter at @WhatsTrending.

Cardi B and Offset Call It Quits