In a TikTok that went viral, a Papa John’s employee at a Colorado Springs location claims he was fired after he refused to work without running water. The incident was posted by the employee’s sister, Jade, @mommarhodey on the platform, with caption, “Brother was fired due to not wanting to work while unable to wash.” In the video, he talks about the pipes being frozen and no water coming in, finding it unsafe and unhealthy especially during times of Covid-19.

“It’s 0 degrees outside. Our water hasn’t been working all day. Literally, haven’t been able to wash my hands while making pizza. So I clocked out. … I don’t want to be like making other people’s food without being sanitary.” The video has over 227K views with thousands of comments supporting the worker, calling out the company as “unacceptable.”

Viewers called out Papa John’s describing this move as “illegal”, demanding a lawsuit against the company. Comments continued to flood the platform blaming managers as “irresponsible” both for sanitary and unacceptable working conditions. 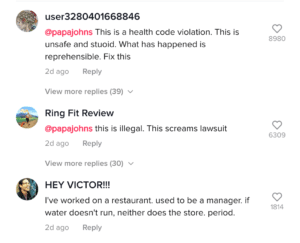 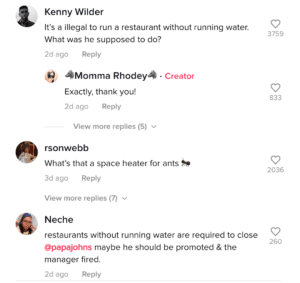 The company representatives were quick to make an announcement regarding the incident. In a statement to TMZ, a rep said, “Due to the cold weather, the water line froze. The restaurant was immediately closed in order to have repairs made.” According to the owner, the employee wasn’t let go, instead, he left the job himself. Whether this was a response to pick up the shattered pieces and save the company’s reputation, or a simple segment of the truth through their perspective, the video continues to be an uprising trending topic.

Jade posted several follow-up videos regarding the matter, giving viewers an insight to what continued. She stated, “Tell me, how did he work 4 hours with no water but still managed to leave before his shift ended. Honestly, if you want to believe the franchise, you’re dumb. … I guess this is the first time a franchise has ever lied,” in a sarcastic manner. She carried on revealing that she called the public health department to complain and they told her that the location would be shut down for the time being until the situation was solved. She declares however that it remains open with no changes made whatsoever. 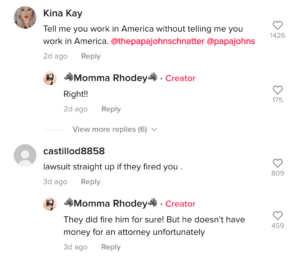 A few days later Jade posted another video of her brother’s co-worker who faced the same situation. “This was taken before my brother’s video.” The employee said in a displeased tone, “No water. Nothing. … No running water. Business is still open.”

Jade opened up to the Daily Dot expressing her disappointment in how the situation was handled by Papa John’s following their public statement. She pointed out that they have yet to find legal help due to the high-cost. The emphasis was laid on how her brother was trying to execute his duty as a worker trying to protect the health of customers as well as his own.

“It hurts to know someone would lie to cover their tracks and try to drag him in the mud for it.”